Two recent documentaries explore the decline of hand-drawn art in the digital age through artists who created and perfected their mediums, only to become displaced by brand-new models as they hit their sunset years. Drew: The Man Behind the Poster and Stripped (available on Netflix and iTunes, respectively) observe the effects that the shift has had on poster art and newspaper comic strips without actively villainizing computers. Film posters and comic strips are both art forms whose biggest stars once accomplished the feat of making salable products that functioned simultaneously as platforms for artistic self-expression.

The subject of Drew is the artist Drew Struzan, whose name you may not know but whose art you have definitely seen. Struzan designed the posters for an all-star roster of blockbusters in the ’70s and ’80s: Blade Runner, The Goonies, The Muppet Movie, Police Academy, and all the films in the Star Wars, Indiana Jones, Back to the Future, and Rambo film series, to name just a few. His drawings are synonymous with the characters they depict and, as many of the talking heads in the documentary point out, are what we picture when we think about these movies more than any actual frame of the films. A savant at illustration since childhood, Struzan moved from Oregon City to Los Angeles at 18 and was quickly hired to do album cover artwork. His motivation for pursuing illustration over fine art was strictly financial; he was “poor and hungry” and had recently become a father. Struzan’s signature pencil and airbrush style earned him a following. People may not have known his name, but they knew his work on sight. He stretched his immense talents to fit each job but maintained the characteristic looseness that made his work so easily identifiable. Work begat more work, albeit for about $200 a pop. His cover for Alice Cooper’s Welcome to My Nightmare became his most popular work to that point.

Eventually the movie industry, flush in the ’70s with even more cash and artistic license than the music business, lured him away with the promise of larger paychecks. Struzan’s first movie posters were for B movies, which perfectly prepared him to immortalize the Flash Gordon serial theatrics of the Star Wars series. As his work developed, it never lost that carnival feeling. His posters are inviting, luring potential patrons not only to check out the movie but to luxuriate in looking at the poster itself.

One fun surprise of the movie is that Michael J. Fox, whom Struzan drew for all the Back to the Future posters, could moonlight as an art critic. A fan of Struzan’s work long before he ever worked with him, Fox’s descriptions of Struzan’s posters are the most poetically apt. His eyes light up with excitement. Everyone in the doc regresses to childlike wonder when they start talking about Drew Struzan’s work. Struzan’s posters transport viewers who look at them, and speakers who try to describe what exactly makes them so perfect. It is the lack of perfection that makes his work superior. His posters are tactile and organic. Even a glossy college dorm print of a Struzan poster feels like you could touch it and feel the protruding ridges of paint. 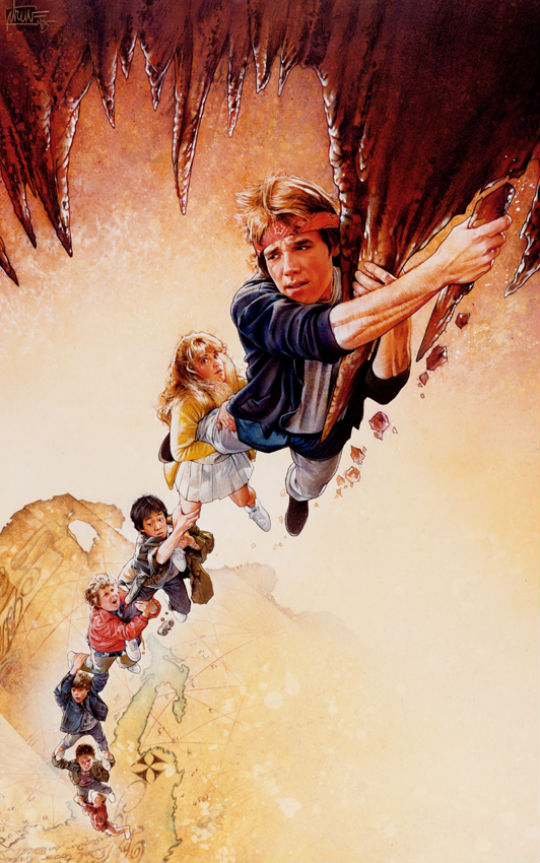 Struzan’s talent for portraiture became his calling card. He captured stars’ images by portraying them in an idealized but still human form, not fully of this earth but not entirely from imagination, either. He painted Harrison Ford hundreds of times, and defined the images of Ford that became his legend, through his work for the Star Wars and Indiana Jones films. It’s all the more remarkable when you find out late in the documentary that Ford and Struzan have only met briefly once or twice, and the paintings were mostly done from reference photographs Struzan took of himself posted in costume as the characters, with Ford’s head transposed on top. His portraits of Ford make him look cooler, tougher, more masculine than any still photo ever could. In Struzan’s hands, Ford always looks like he’s about to say the cleverest thing you’ve ever heard in your life and then pop a perfect shot. 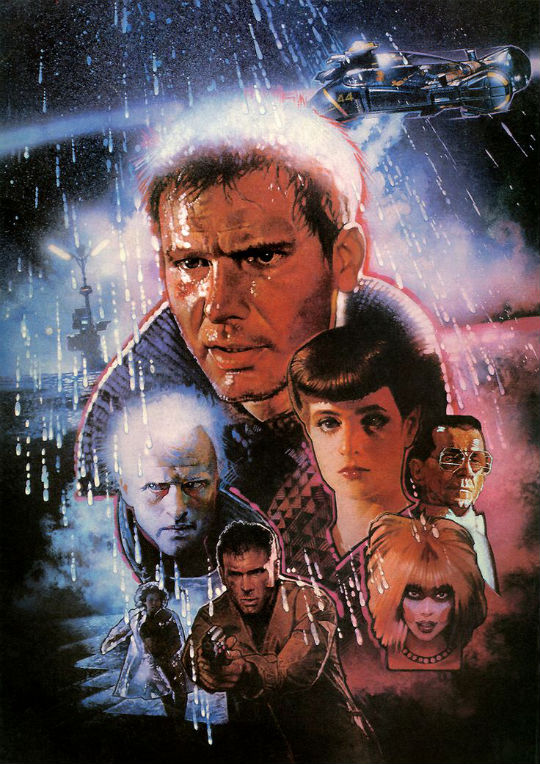 Many of the famous subjects interviewed on the topic of Struzan rhapsodize about his ability to bring film characters to life through a flat piece of paper, be they Muppets, Goonies, E.T., Crown Prince Akeem Joffer, Joel Goodson, or Marty McFly. But he also excels at composition, directing the eye through characters and action across a single frame, often sizing elements unconventionally for emphasis and sometimes, as in the addition of Obi-Wan on the Star Wars poster, because he was asked to make it bigger.

Struzan’s fortunes waned in the ’90s, as his iconic style began to look dated because it was so deeply associated with big movies of the prior two decades. It was also at this time that digitally manipulated photos, instead of illustrations, were becoming the new industry standard. Struzan still did posters, mostly for kids’ movies like Hook, Hocus Pocus, and Angels in the Outfield. The director Frank Darabont took it upon himself to revive Struzan’s career, and had him do the posters for The Shawshank Redemption, The Green Mile, and the first season of The Walking Dead. Struzan underwent a court battle with a crooked money manager who stole many of his most famous original artworks (Struzan eventually got them back). On camera, he radiates calmness and speaks about his work pragmatically, looking over his ridiculously impressive CV and remembering flash decisions or brush strokes he particularly liked. Struzan’s unpretentiousness is appealing, and extends to the documentary itself. Everyone who is interviewed, be they Steven Spielberg, George Lucas, Harrison Ford, Guillermo del Toro, or Steve Guttenberg, speaks about Struzan’s posters with something resembling awe. The average interviewee in Drew is a chill West Coast guy in a Hawaiian shirt with a laid-back, slightly stoner-y vibe. Several of them are multimillionaires. Struzan and his wife, Dylan, who are interviewed together, seem like hippies who realize how fortunate he has been to get paid to do something he loves. Sure, there’s an element of timing and luck to his massive success, just as there is to anyone’s. But Struzan’s seemingly bottomless talent is so innate, and appears so masterfully spontaneous despite all the work it actually takes, that his ascension seems fated. Every director interviewed credits Struzan’s posters as instrumental to those movies’ eventual huge success. Struzan, always a Zen realist, thinks he did some of his best work for movies that flopped.

Stripped also concerns the intersection of art and commerce, and like Drew takes also takes the optimistic view that it’s possible to make something great and profit from it. Stripped looks at the industry from several angles, historical and artistic, but its main concern is the comic strip artist’s never-ending struggle to turn out work with some merit at a breakneck pace. The challenge of keeping it fresh both tortures and stimulates the artists, who get downright sentimental discussing the sadomasochism of the comic-strip creative process. Stripped’s artists humbly suggest that balance is overrated; when something consumes you, it consumes you whole. There are off days and dry spells, but the rhythmic everydayness of cartooning a strip is deeply rewarding. Artists describe how enjoyable it is to create a world without outside mediation.

As with Drew, there is likewise a general lack of pretentiousness among Stripped’s interview subjects, necessitated here by daily deadlines. All of the strip cartoonists share a worldview that no matter how good an idea is in your mind, what matters most is that it gets finished. The constancy and immersion of producing a strip attracts a certain type of dedicated obsessive introvert, across a wide swath of personality types. Charles “Sparky” Schulz is cited as the ultimate comic strip auteur, who, through “Peanuts,” built a dense world of immediately identifiable character types over nearly 18,000 individual strips. Artists talk gleefully about what it feels like to be a showrunner who gets to exercise full control over every character without employing any pesky actors.

Much like owners resemble their dogs, artists resemble their strips. Seeing the real-life inspirations for popular Sunday-paper avatars is a hilarious aspect of the film. Jim Davis is kind of a Garfield–Jon Arbuckle hybrid. Cathy Guisewite is much more beautiful than her neurotic alter ego in “Cathy” would have you believe, but she describes how letting that insecure part of her ego run wild in the comic was cathartic, and part of what made it an ACK!-ccidental ’70s feminist touchstone. Lynn Johnston (“For Better or Worse”) is sensible but sassy, just like her strip. Jeff Keane (“The Family Circus”) looks just like the rendering his father Bil made famous before handing the strip off to his son. The reclusive genius author of “Calvin and Hobbes,” Bill Watterson, is interviewed offscreen, and says beautiful things about the endless possibilities for the form.

The second half of the documentary examines the changes in the comic-strip industry wrought by the virtual collapse of the traditional newspaper model, and with it the competitive syndicating that had been in operation for about a hundred years. The creators of popular web comics are interviewed; Kate Beaton of “Hark! A Vagrant” is especially charming. Jerry Holkins and Mike Krahulik, the guys behind “Penny Arcade,” come off as smug and dickish when expounding on their complete lack of empathy for those whose fortunes depended on the old newspaper syndication model. The newspaper cartoonists have a range of feelings about the Internet; some are wary, others welcoming, and some just condemn it outright.

Both documentaries take an especially rosy view of their subjects, but how I am supposed to be objective about Han Solo, Garfield, or Kermit? I can’t! Artists like Jim Davis, Bill Watterson, and Drew Struzan defined a generation’s concept of nostalgia. Without demonizing the present, Drew: The Man Behind the Poster and Stripped are graceful elegies for the past. That said, there is an undercurrent of suggestion that Struzan’s or Watterson’s analog brush and pencil strokes are better and more organic than any tablet could ever create. It’s a seductive narrative, and while I’m not entirely sold, I do think there’s a point. The extra step of digital mediation between device and screen is absolutely different from painting on a canvas. Not better or worse, just different, for better or worse. But there is another message running through both docs; that connecting with an audience through a mass form rather than high art is not only humble and practical, it can be honorable, too.