There was no way to understand the significance of the Game of Thrones party I attended in New Orleans over All-Star Weekend. There was some mixtape-type thing called Catch the Throne being promoted, but it didn’t really register. Because there was chicken. And po’boys. And Kevin Hart taking pictures with Professor Michael Eric Dyson. And Remy VSOP dragon drinks. 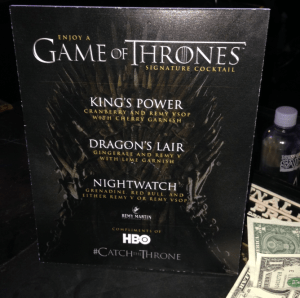 And, you know, a photo booth. 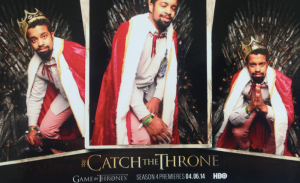 Sure, this was all in the name of some mixtape, but who cared? There were enough distractions in the room for hours, all enjoyable enough to shelve the knowledge of a rap project, indefinitely.

But then three weeks later, the reemergence.

Going into something like this with an open mind, free of cynicism, can be hard on a Friday afternoon. And that’s only exacerbated when it’s a 10-track rap Game of Thrones–inspired mixtape that features Wale.

But sometimes, you have to just try. So I tried. And I’m very glad I tried. Because this mixtape is just what I needed.

Is it good? Compared to my yet-to-be-released seven-track project inspired by Spartacus, absolutely. Beyond that, highly questionable. But my life is significantly better after listening to this tape in its entirety. Because, while they’re completely absurd, it’s hard not to take joy in the lyrics.

How can you be mad at these lines, especially spoken by Big Boi, on the opening track, “Mother of Dragons”?

Before Khaleesi take the Iron Throne
They call her the mother of dragons, you under attack, nigga this our home

Anything else, one half of Outkast?

It’s Targaryen, the rightful bloodline
So don’t you worry about the Red Weddin’ that made it crunch time

Final thoughts, before your 40-city tour?

You win or you die, the White Walkers and Grim Reapers
Either you end it or not, not get caught with death or treason

Wonderful. Yes. Absolutely. Thank you, Big — oh, what? Something else?

One reason this is high entertainment is because it seems as if the artists operated off of a Game of Thrones word bank. This word bank: 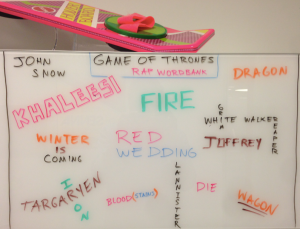 Fire and blood, you win or you die
The winter coming so colder than sky
Call me Lord Snow like the wolf and the lion
Meet your pointy end when I stab you with the iron

Absolutely, Bodega Bamz. In only four lines, you got 6 points (fire, blood, die, winter, Lord Snow, iron). A strong performance. But not even his strongest of the song:

White walkers can never be trusted
Exile across the narrow sea I spit fire like Khaleesi
You tried to pass that wall
Night watches, put bodies on the floor
Bloodstains on the wall
Game of thrones is all about war

10 points. “White walker” and “bloodstains” are each one, “Khaleesi” is two because I make the rules, and any mention of the “game of thrones” gets you seven. Top-notch performance by my BB.

Not every song on the mixtape is so overtly Game of Thrones–based. The Kilo Kish song, “Make Believe,” minus the Dracarys mention in the intro, could just be a normal song about being stuck in a polar vortex. It’s a nice song, as well as a temporary break from word-bank rap. But the reprieve is short-lived, because soon after, there’s this, from Dominik Omega, titled “Arya’s Prayer”:

After Joffrey made martyr of my father
I had to flee the city but my heart grew harder
Gotta get to Winterfell, Yoren knows the deal
Cats soft like Romney, all they wanna do is yield
Foreal, see everyone wagon needs a wheel

You hear this and think it can’t get better. But then it does with the hook:

Watch it all come around as I lay on the ground
Joffrey, Cersei, Ilyn Payne the Hound
They all think I’m lost but I know where I’m found
I’m the blood in the north when it all comes down
My word is my bond and my bond is my word
Valar dohaeris, all men must serve
See as a raven flies and time slips by
Valar morghulis, all men must die

And after this showing, there are still four more tracks on the album, including performances from famous rappers. Like Common:

In the Seven Kingdoms ain’t nobody righteous
A massacre at the Red Wedding, the lifeless
Laid on the ground, now who wears the crown?
A rope tied around by the power we bound

Compared to Dominik Omega, this barely registers. It’s hard to be impressed by a “Seven Kingdoms” reference when you’ve already been blessed by a Romney line that followed a Winterfell line. The same goes for Wale.

I’m tellin’ whoever is messin’ with me, could bring you that Khaleesi heat
Burn up, like I’m tryna fill the urn up

Love the paper but the fame in the way
Love the ladies but the queens hard to get
And I’m like a Lannister, run my town, that’s seven kingdoms
And they’ll never stop us, their only option is try to be us

Not impressed. Also I wrote this, not Wale, but you see how easy and/or fun this is?

Fridays are supposed to be your entry into the weekend. A time to finally turn your brain off after a long, busy, stressful week. Turn your brain off to lines like “Khaleesi heat” and “Fuck the Lannisters and everybody that ride with ’em.” And the rest of the gems in Catch the Throne.