Steve Jobs, the much-discussed Sorkinization of the enigmatic tech hero, continues to build momentum ahead of its nationwide release next weekend. Taking place primarily behind the scenes before three separate product launches — the Macintosh in ’84, the NeXT in ’88, and the iMac in ’98 — the movie chucks up a giant word barrage and lets its actors go to work. Kate Winslet is Joanna Hoffman, the beleaguered, staunch lieutenant. Seth Rogen is Steve Wozniak, the shaggy, eternally underappreciated sidekick. Jeff Daniels is John Sculley, the CEO/father figure. And Michael Fassbender, as Jobs, pours forth the kind of crackling, commanding performance his previous work had long foreshadowed. (Do yourself a favor and read Alex Pappademas’s review, right here.)

Pulling together the imposing cast and Aaron Sorkin’s rocket-launcher script is the eternally underappreciated Danny Boyle. Forget, if you can, the corny-but-Oscar-winning Slumdog Millionaire, and look back to the lovely despair of Shallow Grave, Trainspotting, and 28 Days Later, and then keep going to his more contentious work: the sci-fi psychodrama of Sunshine, the sweat-soaked insanity of The Beach.

Over the weekend, I hopped on the phone with Boyle for a quick chat.

How did the process work to go from the very specific three-act structure of the script to the product we see onscreen, which is full of flashbacks and interstitials?

He’s interesting, Aaron. He has such a reputation for being basically like Jobs — end-to-end control, literally a sealed box. But he’s not like that.

So there were two separate things — the flashbacks that you see in the movie during some of the scenes, some of those were written exactly as you saw and some of those we changed. But the principle of them, of being in one reality and intercutting with another one that referenced it, that was very much scripted. The interstitials — [Sorkin] basically put “newscasters” [in the script], and wrote some lines conveying the information that was necessary to understand the difference from ’84 to ’88, from ’88 to ’98. But the rest was up to us.

So we decided to wander. It’s an invitation from him to add to the film, to kind of make the film walk around, to make it actually breathe, to make it visible. Because so much of it with Aaron I think is the sound — he writes the sound of the man’s mind, and you gotta provide the rest of it. It’s a kind of provocation, really. It can remain like a radio play if you’re lazy and don’t wanna do anything. Or you can pack it full of dynamic and visual [flourishes]. And obviously there’s the amazing performances, Seth and Kate and Jeff and Michael, where they’re not doing it like a radio play at all. They actually spent weeks — in Michael’s case, months — learning it. So they’ve got it by osmosis. It’s just kind of pouring out of them, as if they themselves have written it.

Did you have any guidelines in mind? Anything to force you to stick as much as possible to the bare-bones structure of the script?

We certainly were wary. You have to be wary of going too far. Because you have to serve the scene and what it’s about. But we were gathering material that you may not need. There’s this extraordinary scene [early], Jobs yells, “Go and get me a shirt!” [Laughs.] And then he goes off on his world, which is myopic. Meanwhile, the work wife not only gets him a new shirt but she irons it and she brings it in to him. We thought we might need it, so we filmed Joanna ironing the shirt. [We didn’t use it], but you cover it just so you can be like, “There is another reality out there.”

People are waiting for him and working for him and orbiting around him because he does have the gravitational pull of a planet — even when they pull away they can’t stop seeing themselves in reference to him.

There’s a moment when Jobs makes a self-aware joke, something to the effect of Why am I always being bombarded by everyone in my life five minutes before every product launch? Was that always in there, as a way to nod to the kind of unlikeliness of the premise?

That was always in there. Yeah, there’s a moment where he goes, Holy shit! What the fuck! which is lovely, actually. I’m not comparing myself to Steve Jobs, obviously, but some days it is like that, directing a movie. What the fucking hell else can go wrong! And you do almost step outside reality. So we had that lovely moment, and the audience needed that because part of the bargain is you buy in to the conceit of the thing. And then occasionally you go, This is insane! But you try and head off in front of that. 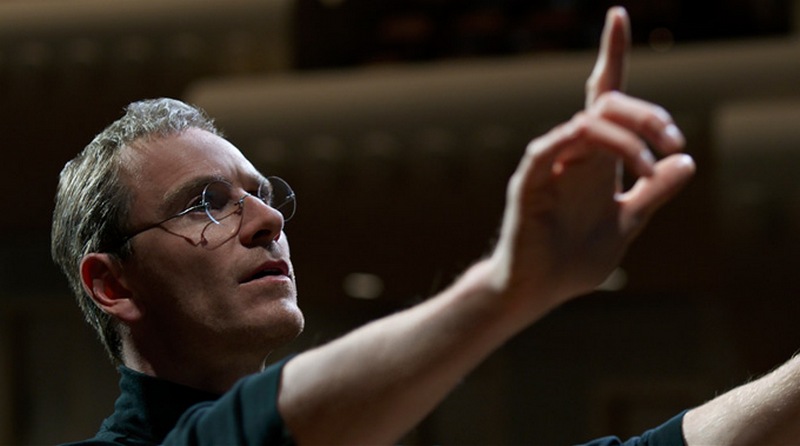 The early reviews and notices have been really positive. Are you surprised how warmly the unorthodox structure of the movie has been received?

Well, I hope it’s well done enough so that’s part of the reason. But people have been able to, you know, step up to it. It is a challenge, like it was directing it. It’s a provocation, an invitation to join in. It leaves it open, it’s not definitive, it’s not trying to be a four-and-a-half-hour biopic with every fact incontestable. The facts are the least you can rely on sometimes.

And I think it’s partially because people know this was a man who demanded fresh thoughts. He was impatient for innovation, you know, specifically of the people he worked with, and that’s why he fell out with so many of them, when they couldn’t come up with it. And so in order to deal with this man and this uncompromising portrait of him — Sorkin’s idea, and our execution of it — the least we can do is the honor of actually doing it in an original way.

The through line of the movie is the idea between being a decent human being and being a great one. Jobs famously leaned toward the latter. But in the movie, by the end, you do offer him a measure of redemption. Is there a version of this movie where you come down more definitively on the other side of things? Yeah, he was a dick, but look at all this cool stuff he did.

It’s interesting, the redemption. I think it was maybe Raymond Chandler who said, “Every work of art has a quality of redemption to it.”1 And when you’ve been on this journey with him, I think it’s earned. And it’s accurate because [Jobs and his daughter Lisa] had a tempestuous relationship but they were reconciled. This is what Lisa spoke to Aaron about, that Jobs did mellow. It didn’t happen the way we do it. No, she wasn’t backstage at the iMac launch. But we wanted it to feel like this is how it could have happened.

It’s Shakespearean, really. He has flaws like us all. And he’s lucky as well, because he gets to acknowledge them, and he gets a bit of self-knowledge, and he’s able to admit to her that, despite making beautiful things, he himself is poorly made. And that clearly haunted him in his life, and you can see him fighting it early on.

The merits and the justifications of this technique are evident. But you are basically reinventing real people, using their real names and likenesses. Did that ever give you pause?

He did a lot of work, Aaron, and he spoke to a lot of people, and spent a lot of time with these people. They came to talk to us, and you were able to measure what the script was suggesting about these people against what they were really like. And they are dramatizations of these people — they’re not quite as eloquent as Sorkin has them. The technique is the language. The rhythm of the language is so outrageously eloquent. It felt like you were addressing what these people were really like, or even what their internal minds were. Their real concerns.

I think [Aaron] did a great job of representing everybody as fairly as possible. You can always pull it up on details. But I hope that they’ve forgiven us for any missed details. It’s not quite pinpoint accurate. But the intentions are honest and true.

The production of this movie was famously chaotic. But as the end product indicates, a chaotic development process is not necessarily a bad thing for making a good movie.

[Laughs.] There’s certainly an easier way to make a film! But it actually links to what you previously asked. We always felt that this was honest and true, and so when all the shenanigans began — it was just noise, you know? And you have to be very careful to not let it affect it, and to not let it cross-pollinate with it. Hollywood, it’s a very self-dramatizing town, and I’m sure they can make great movies about it. But you’ve got to keep it clear of your material. So we kept our heads down, kept it simple, and just got on with it.

This is a bit random, but in the spirit of “It’s tough to get movies made even when you’re an Oscar-winning director,” I’d love to hear about how you managed to land your first feature directing gig, Shallow Grave. I know you were working in TV at the time.

It was hard, yeah! I had nurtured ambitions for a long time, I’d been up for lots of interviews for stuff, and I never got any of them. And the way those films turned out, I was glad I didn’t! [Laughs.] You shouldn’t think like that but, you know, you’re disappointed, you’re desperate to try and begin a career in film. And then, um, I was very fortunate. There was this script, and the guy who had written it [John Hodge] and his producer, they met lots of people and they didn’t like them. And I usually take the option of being as honest as possible about most things. I’m not tactical, really. And I said to them, I said, “Well, you’ve stolen large chunks of it from the Coen brothers.” Which made them laugh, because clearly they had! And I said, “We should steal some more.” And we got on very well and I got the job and we made a decent job of it and we went on from there.