The Entourage movie is only one week away.

We never thought we’d get to type those words. Even now the dream seems too big, the imminent reality too much to ask for, a greedy prayer to the gods of Hollywood destined to go unanswered while they busy themselves preparing the next 10-figure-grossing comic-book epic that could fund Entourage sequels deep into this still-young century. Why build up a modestly budgeted premium-cable spinoff empire when you can destroy city after city, summer after summer, ignoring the relatable superheroes who wear designer jeans instead of spandex bodysuits?

The boys don’t think like that. They would never subscribe to such a defeatist philosophy; their prayers are always answered because they dare to pray. They dare to chase the dreams. And they’re rewarded with the houses, the cars, the nameless groupies, the medical-grade hydroponic herb, the sumptuous breakfasts, the top-shelf tequila investments, the chairman-and-CEOships of multibillion-dollar media conglomerates that come along with the fearlessness to spark one up in front of those Hollywood gods, blow a defiant cloud of Purple Starmaker in their faces, and demand what’s theirs. Give us our movie.

Fine, fine, say the gods, worn down by the tenacity of their cocksure supplicants. You get your movie. All you had to do was ask.

But do you think all dreams come easy, even to the boys? Sometimes it may seem that way, that every low-stakes obstacle is quickly overcome on the way to a triumphant, if foregone, conclusion 30 minutes later. But sometimes we need to remember that the struggle is real. That even a legend like Johnny Drama can wake up in the middle of the night, drenched in sweat and screaming, as he realizes a a dream has just been torn from his desperate grasp. Reminds the Hollywood Reporter:

“We were doing a party scene at Turtle’s house with cameos up the yin-yang,” says Dillon. “We had 20 trailers, each for a different celebrity — it was like a small city. It was fun, but it wasn’t really a party. As soon as they said, ‘Cut!’ the music would stop.” In yet another case of life imitating Entourage, Dillon’s favorite scene — in which Drama does a striptease with Channing Tatum — was dropped from the shooting script when Tatum canceled his cameo (“I did a lot of whining,” says Dillon).

But not next week.

Next week, all the dreams come true.

Next week, all the prayers are answered.

Next week, the Entourage movie is here.

The Entourage movie is only one week away. Were we not clear about that? As much as we’d love to embark on a series-long retrospective and take you through every beat of all 96 perfect episodes, time is running out. It’s the sacred duty of this Countdown to prepare you for the movie’s arrival, and the best way to do that on this final Wednesday — an impossibly short seven days before the June 3 premiere, hit up the Fandangs to peep your local showtimes — is to fast-forward to the last episode of Entourage ever. So here we are. If you feel like you need more than that, allow us to humbly direct you to a more comprehensive online resource.

Imagine a world in which Entourage: The Original Series is going away — possibly forever — and the boys do not share a meal in the final episode. What kind of world would that be? No world at all, and certainly not the world they’ve spent eight seasons building. The boys would never do that to you. The boys know how important those meals are, and so they dine together … in the very first scene.

Booyah. [Bumps fist. The windows on a thousand Dennys nationwide explode from the shockwaves.]

Turtle, Drama, Billy Walsh sit around a table, noshing. Vince quickly joins them. He has big news! The biggest news. He’s returned from the best 24-hour date of his life. And he’s getting married. In Paris. Tomorrow. To Sophia, the reporter from Vanity Fair with whom he has fallen deeply, madly, inadvisably in love.

The boys also have news. Equally big news. Sloan is pregnant. With E’s baby. And no, E and Sloan are currently not in a relationship; let’s not get too deep in the weeds of the particulars, but it has something to do with E having sex with Sloan’s father’s ex-wife. This development is a serious complication for both of them. For all of the boys, really. Entourage boys share their complications.

Mentally zoom in on the plates in the above scene for a moment. What do you see there, in your mind’s breakfast-scoping eye? Sausage? Potatoes? Fruit? That’s right.

WE DO NOT SEE HIM PREPARE IT, BUT JOHNNY DRAMA HAS PRESUMABLY MADE THE BOYS ONE FINAL BREAKFAST.

Booyah. [bumps fist. The windows on a thousand Dennys nationwide are magically restored.]

E desperately wants Sloan back. But even if he can’t have her, he’s going to move to New York — oh, right, Sloan is moving to New York — to be closer to the baby. The boys are also open to moving to New York. What are they going to do, let E move by himself and start a new life without them? No, of course not. Entourage boys share parenting duties. That’s everyone’s baby.

While not technically a “professional” decision — though it may indeed have eventual negative effects on his career — his impulsive proposal to Sophia certainly qualifies as irresponsible. They barely know each other, and now he’s chartering a private jet to fly everyone to Paris to witness their ill-advised nuptials? Come on, Vince. This is not going to end well. Take some time. Go hang out in one of the world’s most beautiful cities for a minute without the pressure of a poorly-thought-through lifetime commitment. Make sure this Vanity Fair reporter is the Vanity Fair reporter of your dreams. Buy a beret and chill the fuck out for a hot French minute.

At one point, Ari unleashes a spittle-flecked tirade upon Lloyd for the unthinkable sin of removing a long-forgotten pop-opera boy-band CD from his desk, the kind of violent overreaction to a minor transgression that has defined their professional relationship for eight harrowing seasons. So: textbook Ari! A lovable, dehumanizing rage-monster scamp to the very end.

Later, after Ari quits his agency to spend more time with the family he’s ignored, he will tell an inconsolable Lloyd — who will possibly abuse him in the sad, tragic way to which he’s become accustomed? — “You’ll always be the gay son I never wanted.” There’s something approaching tenderness in Ari’s voice. He can’t even bring himself to hurl a BlackBerry at his unwanted adopted son’s head. But there is, of course, one more homophobic joke for good measure. Old habits die hard, especially with family.

Indeed, he does. He quits the agency, Jerry Maguiring himself out while carrying a lucky horseshoe and a photo of his beloved family. (His family-family, not his boys-family.) He finally listens to the opera CD he promised his daughter he’d get to months ago. He goes to therapy with Mrs. Ari, then offers to save their marriage by moving to Florence with her indefinitely, leaving the relationship-eroding biz behind. He’s always been a family man, even when he’s been neglecting them in favor of building his empire. He did it all for them.

Celebrating the blossoming motherhood of the elegantly gravid Sloan, Drama offers, “Remember these words: From behind, you don’t even look preggers.”

There is no weed-smoking, possibly out of respect for Vince’s still-fragile, post-rehab sobriety, but also possibly because the boys are temporarily out of weed.

Mike Ditka shows up at Ari’s agency to give a motivational speech. Ari is too inconsolable — you know because he’s sitting in his office, unshaven, wet-eyed, and borderline catatonic — about the dissolution of his marriage to be lifted even by Ditka’s inspiring, championship-level oratory.

Rachel Zoe — you know, celebrity stylist/fashion mogul Rachel Zoe — helps Vince pick out Sophia’s engagement ring. “It’s not about money — she’s wearing this forever,” she offers, pointing him in the direction of a massive, 6.45-carat, emerald-cut diamond that winds up costing Vince $1.4 million. It’s not about money, indeed. It’s about potentially bankrupting yourself at a Beverly Hills jewelry store over a marriage that will probably be over before the Black AmEx  bill arrives.

At the airport where the boys will embark on their journey to Paris, E asks Ari if they should hug it out. Ari leans in … and then, nah. He pulls back. They laugh. And we laugh with them, for there will be no hugging it out this day, closure-seeking bitches.

How does two private jets sound? 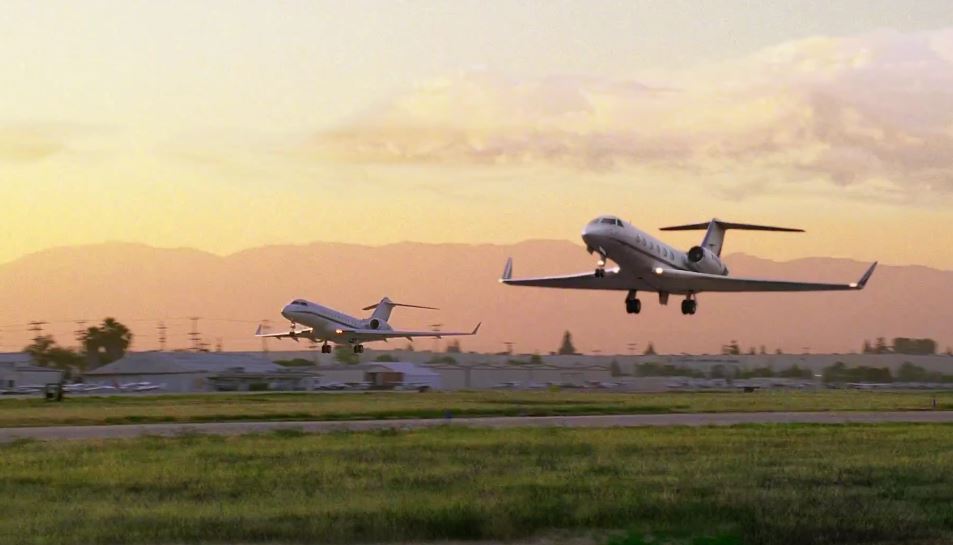 Vince is on his way to Paris to get married.

E and Sloan are on their own plane, relationship-repairing destination unknown.

Johnny Drama has high hopes for France. “We better find something to fuck in Paris.”

14. Is there a post-credits scene that sets up a potential Entourage movie, even if such a thing seemed at best an impossibility and at worst a terrible idea back in 2011?

Ari answers a phone in Italy. It’s John Ellis. And this is what Ellis offers the man who just has thrown it all away to live out a peaceful retirement with his wife.

“I want you to replace me as chairman and CEO. It’s my time and yours. This is not just about movies. It’s about a film division that grossed $4 billion. It’s about a television network and three premium cable networks. You want a sports franchise? Buy one yourself. Because there’ll only be a handful of people making the sort of money you’ll be making. And while everyone you know may own the fanciest clothes, or the best cars, you will own the companies that sell them. You want to know what heaven is? Ari, TRY BEING GOD.”

Ari hangs up without committing, telling Mrs. Ari it was a simple cable company solicitation. But we can see his eventual answer in his widening eyes. And it is just two words, echoing down Hollywood Boulevard: 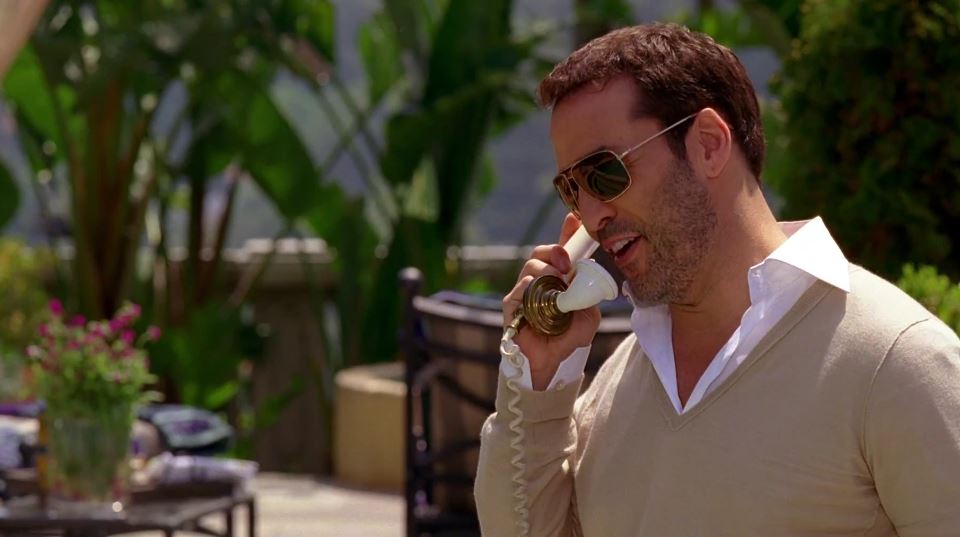 Ari Gold’s Acting Corner Starring Ari Gold, Part II: Your Latest Reminder That Ari Gold Is a Creation of Commedia Dell’Arte, in Case You Forgot How Much Goes Into Breathing Life Into One of the Most Important Characters in TV History

“One of the forms [of acting] that I did was commedia dell’arte, which is an Italian form where you’re in one of four states — happiness, sadness, anger, or fear — at all times, and you’re ramped up to a 10, you know? … The Italian form is a heightened emotion that has to be rooted in sincerity. I ran into Tim Robbins, the actor and director who taught me the commedia dell’arte form, and he just laughed, because he knows that that [Ari] character is played completely in the commedia dell’arte form. Now, if I were to explain that to the average person who maybe likes Ari Gold, I don’t know — I don’t even know why I’m telling you, to be honest.”

—Ari Gold on the making of Ari Gold, in GQ [previously]

Possibly Exaggerated Claim of Hollywood Verisimilitude of the Week

“The world has to be as real as possible to make it feel like it’s happening. People watching the first season thought it was a reality show — a lot of people didn’t realize it was scripted.”

—Entourage creator Doug Ellin on his encounters with fans who may have never seen scripted television before.

Instagram Memory of the Week, Involving a Battle Ax, a Viking Helmet, and a Locked-In Johnny Drama

Get ready New York, KD will be rocking the Garden tonight #victory

Can we also interest you in a comprehensive slideshow of Johnny Drama’s meals? Of course we can.

Next week: The Entourage movie is here. It’s happening.

Whether you’re ready or not.