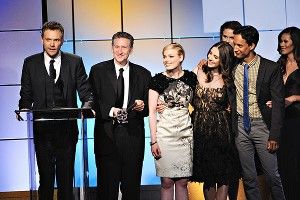 Well, isn’t this a pleasant turn of events? Community — the Job of network television — experienced not one but two positive incidents this week.

First, there was the Emmys board definitively coming down in the show’s favor in an argument raised by The Simpsons‘ Al Jean. Basically, Jean and a bunch of his animation veteran pals wrote the Emmys an open letter disputing the decision to allow Community to enter its special animation episode (the one where the Greendale gang got made into 8-bit video game characters) for consideration for an animation Emmys award. It’s all pretty nitpicky, so EW helpfully summarizes: “[The animators argue] that it’s not fair that Community writers can submit their work in both traditional comedy and animation categories. Animated writers have long been told they can only submit episodes for animated writing slots, which are handed out during the less glamorous Creative Arts ceremony.” For the record, Jean and the rest make it clear that they — unlike God, apparently — do not hate Community: as Jean writes, “This letter is in no way intended to be a slight on the terrific show Community.”

But the Emmys folks have already responded and, boom, Community gets to do whatever the hell it wants: “Community is a Comedy Series that for the last two years has included an animated ‘special episode.’ The competition includes a rule that a special episode can enter as a stand-alone special, ‘if it involved a significant and substantive format change throughout e.g. from whole-episode live action to whole-episode animation.’ The Community producers followed that rule when they entered the producer-writer-director team for the animated episode in the Animation category and the regular, live-action episodes in the Comedy Series program and Comedy Series individual achievement categories.” Got it? Community won’t get its right to double-enter taken away, because — unlike the animated shows, which only qualify for animated categories — it has episodes that qualify for both animated and non-animated categories. Great, good, congrats. OK, let’s move on to the other W notched by the program.

This one was of the more literal variety, as the show actually won a Critics’ Choice Award for best comedy series. Joel McHale accepted the award, saying, “First we want to thank show creator Dan Harmon” and adding that “without critics, this show would never have existed.” Of course, Harmon himself wasn’t present, on account of having gotten fired and all. After the ceremony, he tweeted, “Congrats, Community, and thank you, critics. Sorry I was unable to have been invited!” Ah, that’s actually pretty depressing. But hey, come on. It’s still Community.