Coherence is a movie you’ll want to see multiple times. It is, in fact, a movie about multiplicity. That’s really all I can say — such are the joys of its quantum physics–fueled plot. Just watch it.

Coherence opens with eight friends at a suburban dinner party — and all the relationship kabuki a setting like that entails. One of the movie’s many miniature triumphs is how perfectly it depicts the social dynamics of a group of friends in their mid-to-late thirties, and how well it takes that kind of wine glass–clinking ennui and warps it into something very, very weird, but very recognizable at the same time.

There’s the “barely sublimated career angst” person. The awkward “I’m dating your ex” person. The “I messed up my chance to live my dreams and now I’m pretending everything is fine” person. The “surprisingly into crystals and feng shui” person. The “annoyingly always has their shit together” person. The “10 years in recovery” person. People, in other words, at a point in their lives where idealism long ago gave way to reality — a point where some of them might be wondering about lives that could’ve been led, if this or that event had shaken out just a bit differently. That’s where the comet comes in. Because while this dinner party is taking place, Miller’s Comet is passing by the Earth, bending the laws of physics in ways the characters can’t understand.

One of the inadvertent victims of high-fidelity summer tentpole CGI, especially when it comes to the science fiction genre, is the strange and the weird. The mysterious. When I went to see Godzilla, for instance, I knew I was walking into a movie about a 400-foot-tall, nuclear fire–breathing lizard. I’m already suspending my disbelief and holding a chloroform rag over the mouth of my extremely basic knowledge of zoology. You can try limiting the beast’s screen time, à la Jaws, to focus the dramatic punch of its appearance. And you can add all the science-guy exposition about nature and the dark depths of the oceans to try to ground Godzilla in something resembling Earth’s reality. All well and good. But when the monster appears, smashing buildings and breathing flames in seamless Imax perfection, the last thing I think is how weird and how confusing it would be to experience a giant monster destroying a city. It just looks too fucking awesome to be mysterious.

Coherence doesn’t have the budget to show you the giant lizard, so it shows you eight people you might recognize from your own life going, “What the fuck is happening?” The disbelief and confusion of the characters ends up driving the movie. Imagine if the characters in Cloverfield never left the party and you’re on the right track.

Adult-malaise relationship drama and dimension-bending science fiction are not genres that spring to mind as being two great tastes that necessarily taste great together. Like, perhaps some would disagree, but the last thing Guardians of the Galaxy needed was to be more like Frances Ha. But the burbling naturalness of the dinner conversations in Coherence — people talking over each other, a tone of annoyance hitchhiking onto a sigh, a flash of anger in a glance while washing dishes — establishes a set of personal stakes for each of the characters that’s magnified when shit starts to get super-psychedelic.

When a character does something in Coherence, even if that thing is a structurally pedestrian “someone go see what that was” kind of suspense trope, it just flat-out works because the characters are so well drawn. Existential career disappointment organically gives way to alien paranoia. A relationship on shaky ground becomes a reason to walk into a reality-warping shadow. 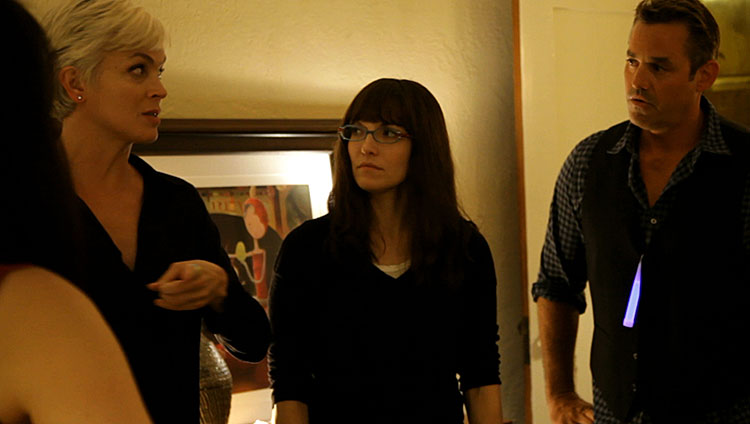 That’s not to say it’s all mystery and mood and no answers. Narrative payoff is actually what elevates Coherence from something interesting to something that feels truly special. Science fiction often falters when the genre’s baked-in impulse for intricately detailed world-building moves from small ideas to big concepts. Learning about the Millennium Falcon’s hyperdrive is pretty cool, but once we get to the Force being caused by midi-chlorians in the bloodstream, I’m out.

Director James Ward Byrkit manages to sprinkle Coherence with enough clues to reward the detail-oriented thread-pulling that makes sci-fi so much fun. As certain twists are revealed, you’ll find yourself reevaluating a line of dialogue, or the position of a piece of scenery, or the color of a pen. Better yet, when you do watch the movie again, you’ll find that attention rewarded with deeper understanding of what the hell just happened. That balance is hard to strike. Not enough answers and you get the end of Lost. Too much explanation and you get The Matrix sequels. Coherence gets the mix just right.