Thursday morning, I awoke to an email from a friend in Cannes concerning her plans for 8:30 a.m.: “Being bad. Going to Mad Max tomorrow.” In fact, I was just as guilty. I had gone to bed excited to pop out of it and run to the Palais to see 70-year-old George Miller’s reunion with his most important contribution to the movies. “Being bad” is film-critic speak for “I didn’t come to the world’s greatest festival to watch a movie that opens tomorrow ALL OVER THE PLANET.” But the programmers made it rather easy. That morning’s out-of-competition screening had virtually no competition — specifically in that time slot or aesthetically at all.

One of the set pieces for Miller’s Mad Max: Fury Road involves men swinging on pliable rods affixed to speeding armored vehicles. The rods make it easy to toss explosives into the runaway oil tanker alternately driven by Tom Hardy, Nicholas Hoult, and a one-armed, bad-ass, grease-painted Charlize Theron, who’s exiting her high-Dunaway phase and entering high Sigourney. The whole movie is like those “pole cats”: a grenade lobbed with amazing acrobatic finesse. To be clear, it’s also insane and very loud (I couldn’t hear most of what sparse, shouted dialogue there is over the surrounding roar). The plot and visuals hang together, however — at nearly a molecular level. But you should read Alex Pappademas’s beautiful review of Fury Road. I’ll just say that I enjoyed the headache that Miller and his production, stunt, mechanic, and effects teams gave me. (There is also someone specifically credited with maintaining the film’s look. That nod doesn’t seem unearned. I wanted to wear this movie.) Miller has also unified diverse ideas (drought, white supremacy, sexual enslavement, action-movie feminism) into a theme. It plows forward at a breakneck pace, but this is an old man’s action film, dangerously energetic, but also, in its angry way, wise — about how to generate, vary, and sustain violent motion, and about what all that motion means, what and whom it’s for. One of the plot twists involves a simple change of direction. You’re touched. You’re cautiously optimistic. Maybe Hollywood will follow him.

Rarely do I watch a movie that causes me to grind my teeth in stress. Today I watched two. A few hours after Fury Road, I saw the main-competition entry Son of Saul, a Hungarian Holocaust movie set in and around one of the Nazis’ crematoriums. With a few strategic exceptions, it’s told entirely from the point of view of Saul (Géza Röhrig). The camera rarely leaves his face. Saul works as a member of the Sonderkommando, Jewish prisoners conscripted into helping the Germans carry out mass exterminations. The terrible job consists of helping secure the gas chamber door, clearing the shower of corpses, scrubbing it clean, loading the bodies onto elevators, and transporting them to the incinerators. After one gassing, Saul hears a gasp. A boy has survived — not for long. But Saul is committed to procuring a rabbi for a proper burial. To a fellow kommando, he insists that child was his son.

Telling this story from Saul’s perspective entails the camera rarely traveling more than a few feet away from him. It’s virtually pinned to his coat, which has a big, red X painted on its back. The atrocities he facilitates occur as a blur to us. We’re not seeing what he sees, per se, but perhaps how he’s come to see it: as a sort of nauseating white noise. This is an ingenious formal innovation that the director, Laszlo Nemes, maintains for 107 minutes. He’s made a war movie through a moral and psychological keyhole. There’s a lot you don’t see, but Röhrig’s hard face and kind eyes fill in a lot of blanks, as does the sound design, by Tamás Zányi. It anticipates that your limited vision will enhance your sense of hearing. The gun shots, barking dogs, mewling women and children, and crackling flames become an atrocious orchestra.

The safest place to stand is with Saul. Not simply because he’s a Sonderkommando, but because he seems magical-realistically impervious to death. Saul’s theft of the boy’s body and his search for a rabbi become entwined with an uprising plot brewing at the camp.

This, apparently, is Nemes’s first feature. Filmmaking this strong and this ingeniously applied to a subject this familiar surely vaulted the movie into the main competition. The weakest aspect of the film is Nemes’s script, which he wrote with Clara Royer. The film puts you on such a visceral ride that it’s only once you’ve exited that the narrative bothers you. This is another film that prizes Jewish insurrectionists while the herded doomed go forth, faceless and anonymous. Unlike its counterparts — Defiance and Inglourious Basterds, to name two — Son of Saul find nothing celebratory in the distinction. But its form draws a heavy line between resistance and death nonetheless. 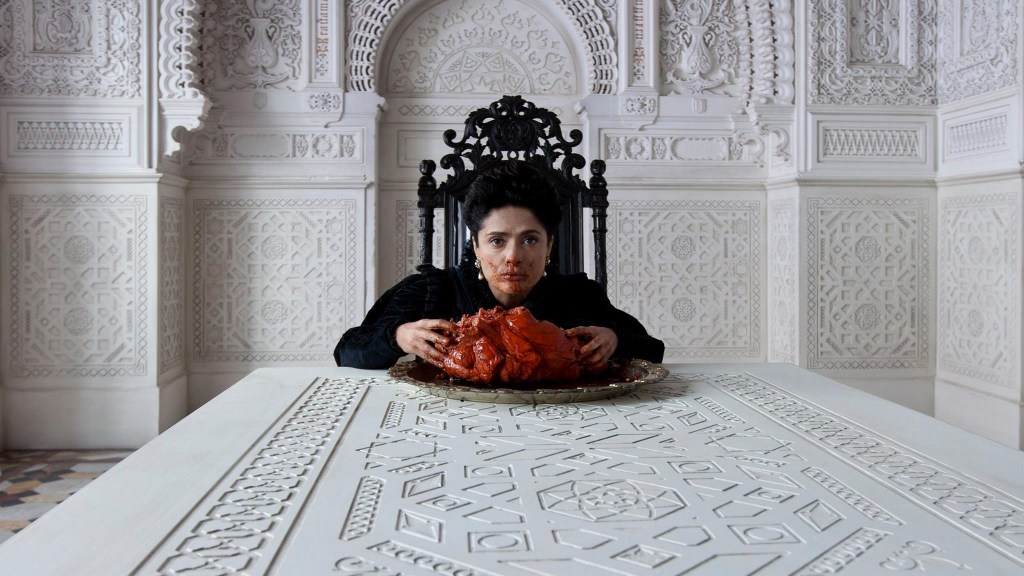 One of the highlights of coming to Cannes is that it works as a summit of national filmmaking. Son of Saul takes a Hungarian angle on continental tragedy. And Fury Road serves as an exclamatory reminder that few countries’ movies are as organically gonzo as Australia’s. Its directors treat “Down Under” as a license to be upside down. The same goes for Italy. Matteo Garrone, for instance, has been operating with a substantial permit. His area of interest is the Naples region. After one masterpiece — the globalist crime epic Gomorrah — and another very different but almost as fabulous opus on fame called Reality, I’d say that interest has become an expertise. I was excited to see what he’d do next, only to realize on opening night, while trying to stay awake through his latest movie, that I’m not sure he knows. His new movie is called Tale of Tales and is a kind of omnibus of connected storybook allegories, inspired by the Neapolitan writer Giambattista Basile, that nastily take on vanity, beauty, subjugation, maternity, and political institutions.

Garrone squanders the sense of place and local Technicolor that made the previous two movies so good. The new film, his eighth, is set in forests and castles and caves. Some of the production design is superb, but the pacing is a different story. The humor feels waterlogged, the connection among the tales too vague for the undertow that dark comedy and good storytelling can simulate. The film begins with the tale of a childless king (John C. Reilly) and his queen (Salma Hayek). A mystic suggests a surefire infertility cure that involves slaying a sea monster and eating its heart, but only if it’s cooked by a virgin. Mission accomplished.

In another tale, a different king (Toby Jones) ships his unsexed and lovelorn daughter (Hayley Carmichael) off to live with an ogre (Guillaume Delaunay) because he’s obsessed with the insect he’s raised to be an enormous second child. In a third, the maiden desired by a playboy king (Vincent Cassel) is also a cursed crone. That one might work best, because Shirley Henderson had figured out how to stock the prune with some pathos. Garrone is strongest in the film’s final scenes, with the princess and the ogre, when the film abuts boogeyman horror. There’s a template for him to exploit. It’s unclear whether working in English (the film was shot in Italy) or with such amorphous stories has thrown him off, but I vote for a return to the 21st century, where he can slay a sea monster and eat its heart in his sleep. 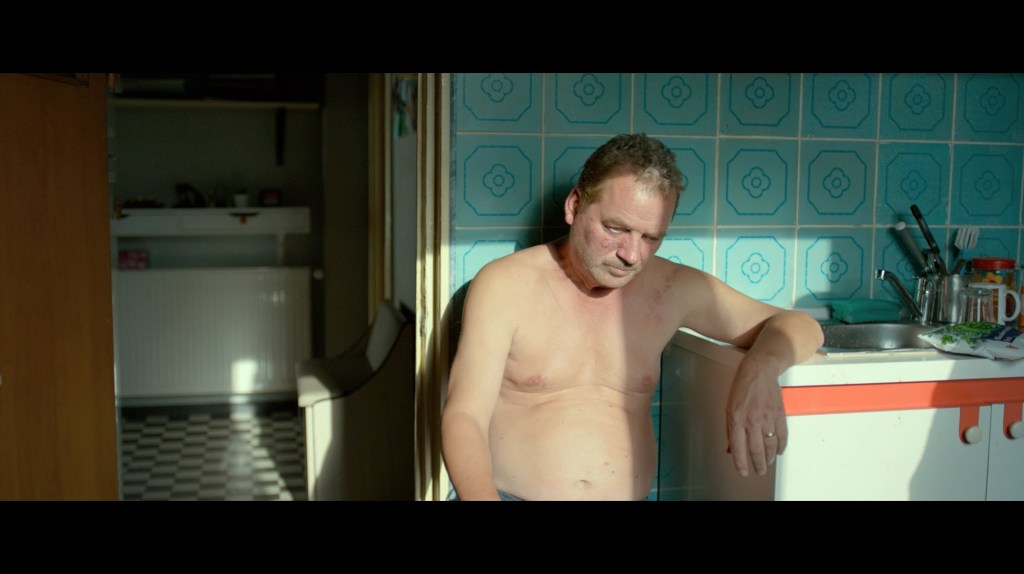 The Palais is like a collection of hallway lockers if you’re inclined to think this way. Near the mail station, a colleague mentioned that she doesn’t get “the Romanian thing.” I replied, you’ve probably been seeing the wrong ones. This recent 10-year spate of Romanian movies ranges from OK to extraordinary. Each operates with a highly calibrated story and thin veil over a post-Ceausescu political allegory. When one of these films works — the classics include The Death of Mr. Lazarescu and 4 Months, 3 Weeks, and 2 Days — your blood boils, your heart breaks, you laugh at the final figurative twist of a knife. Any one of these movies (they’re all wry and deliberately paced) is a like a chain of paper snowflakes: two hours of cutting and you aren’t entirely sure what you’ve got until the final couple of scenes.

That said, one moviegoer’s paper snowflake is another’s trip to the dentist. I happen to love the mounting suspense, mystery, and outrage, and the punch lines of the best of these films. I’m also the first to scratch my head when they don’t work. Radu Muntean’s One Floor Below is one that doesn’t.

A man named Sandu Patrascu (Teodor Corban) overhears his downstairs neighbor murder his wife. Rather than tell the police, Patrascu says nothing, going on with life. One Floor Below features many of the virtues I’ve come to adore about this class of Romanian film. There’s an attention to occupation as catalyst for behavior (Sandu does some kind of brokering of auto registrations) and to basic, everyday life. There’s a monologue or an exchange that creates a moral or thematic framework without also explicitly saying: This is my thesis. There are strong women, not always in small roles, and, not infrequently, the seemingly impossible conflation of Alfred Hitchcock and Krzysztof Kieslowski.

What’s missing here is what’s absent from Muntean’s previous film, the 2010 adultery mystery Tuesday, After Christmas: the connective tissue to prevent you from feeling that you missed something. The degree of difficulty is high with these films. One slightly errant plot point or credulity-straining form of behavior and the movie is off. Here, it’s the level of Sandu’s willing complicity. Maybe it can be written off as a peculiarity of the Romanian character. That doesn’t entirely excuse (or explain) the labored literariness of the final scene. And trying to put your finger on why this is damaging is like trying to find a hole in a tire in order to make a repair. It might just make more sense to buy a new one.