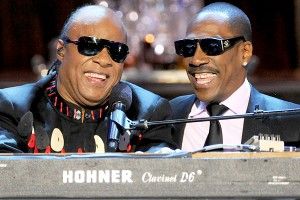 Last night SpikeTV aired Eddie Murphy: One Night Only, a star-studded tribute to Eddie. And even if it wasn’t SpikeTV, where every programming decision seems vaguely nefarious and inexplicable, it felt like kind of a strange time to do it. At any other point after, say, Dreamgirls, it would have made sense: Sure, Eddie’s mostly fallen off, but let’s celebrate all the awesome stuff he did back when he was on top. But then we got last year’s false-start adult-comedy comeback, encompassed by the lukewarmly received Tower Heist and the canceled plans to host the Oscars. So now it’s like we can’t help but think about how, at some point in the last decade, Eddie either lost his nerve or decided he didn’t really feel like trying anymore. It was an odd thing to see comedian after comedian come up and praise Eddie with what you could tell was genuine devotion, respect, and, sometimes, straight slobbering fandom, and to think, “but what about Norbit? Isn’t anyone gonna give this guy shit for making Norbit?”

As an excuse to get a lot of funny people together and to watch a lot of prime Eddie footage, though? It was pretty good.

Chris Rock probably came the closest to hinting at how Eddie’s stopped trying to be the funniest person in the world. He told an anecdote about a memorable nightlife excursion, prefacing it with a promise that when all the comedians are just sitting around, watching a fight at Eddie’s house, well, Eddie’s still the funniest.

Tracy Morgan chose to do some solid jokes about the joys of unprotected sex.

Stevie Wonder showed up and he and Eddie sang “Higher Ground” together. To his great credit, Eddie did not pass up the opportunity to do his Stevie Wonder impersonation. Also: “You takin’ up the whole stool, n—-.”

Here’s Adam Sandler telling a story about how Arsenio Hall has a large penis.

And here’s Brett Ratner, rocking “Party All the Time.” This is pretty funny, actually. But it doesn’t make up for the fact that if Brett had just shut up for a while after getting the Oscars producer gig, Eddie might have still been hosting the show right now.

And, finally, Eddie himself takes the stage. He says hello, he comments on how unsettling it is to have your ass kissed for two hours, and he dips out.