I received an e-mail on Wednesday afternoon, made possible only by finding the one RV at Burning Man with a wireless signal strong enough to open Gmail.

It was from Sean Fennessey. Of Grantland.com. 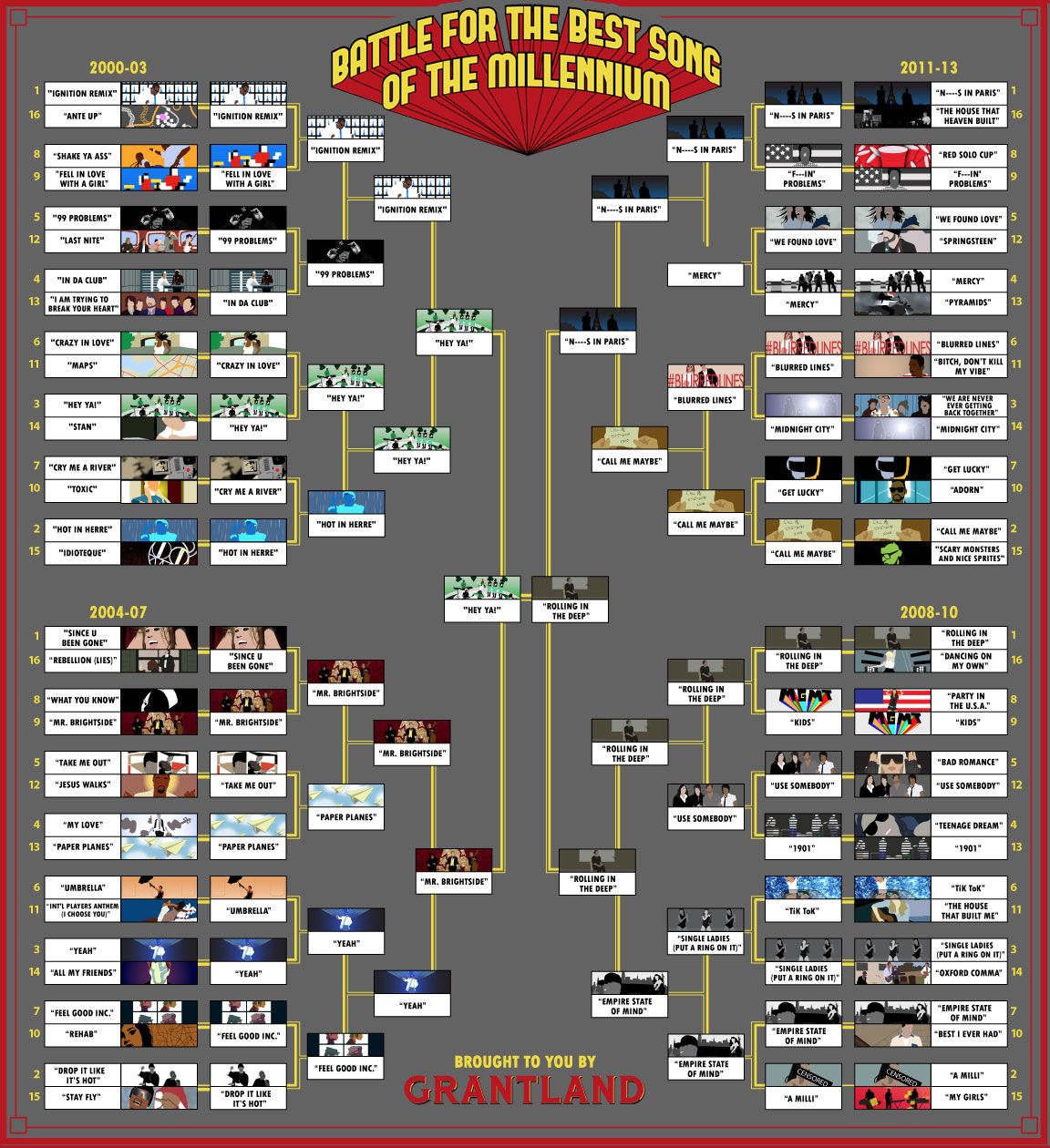 It’s worth noting this is the first news of the bracket I’ve heard since the first round. Initial thoughts:

1. Why did we do this bracket?
2. Oh yeah, brackets are fun, that’s why we did it.
3. Yeah, we definitely shouldn’t have done this bracket.
4. Well at least “Mr. Brightside” eventually lost, after the act of terror that was a hearty defeat of T.I.’s “What You Know.”

Soon after, the wireless died, even before I could respond. But I knew he wanted some words on the finals, if I could find a way to send them, so I began my mental two-pronged thesis of the situation: my biases that will always align me with OutKast, even if it’s not a true Andre and Antwan production, versus “Rolling in the Deep,” the third-best song on 21, but a monster of a track nonetheless.

And now I’m here. Sitting in a tent at 9 p.m. with a headlamp illuminating my Mead notebook, dealing with the slap in the face that is this bracket, the democratic process, and Earth.

Want to know what I think? I hope “Mr. Brightside” wipes the floor with Adele’s song that continues to go platinum every pay period. I hope I return to the Internet on Monday to learn that the Killers are responsible for the song of the millennium. And I hope when I check my e-mail on Monday, instead of a message from Simmons, Bill, it’s from Flowers, Brandon, the new editor-in-chief of Brandland.

As for Adele, I hope she finds out the results and “is simply happy to have made it this far.”

Finally, I hope that every person who repeatedly voted for “Mr. Brightside” to make it out of a region with “Since U Been Gone,” “Paper Planes,” “Rehab,” “Yeah,” and “INTERNATIONAL PLAYERS ANTHEM” looks in the mirror after the pro-Killers results, fist-pumps, and reads aloud the text on their shirt: “Stand for something or nothing at all.”

(One minute after sending e-mail, another message from Sean.)

“Hey, our bracket got spammed by Killers fans. The numbers have been fixed and ‘Hey Ya!’ beats ‘Mr. Brightside.'”

Well then. Take back everything I said. Except Brandland. That imprint’s got legs.

I don’t care who wins. The real victory has already taken place. FOLLOW YOUR BLISS.