I can see now that we’ve made a grave mistake. This bracket, this choice we made in the dead of summer to celebrate the fun and foolishness of popular songs, was all wrong. There were other opportunities, dismissed without a second thought. Great brackets. Brackets you’d never forget. The Coolest Cats Ever. The Best Sitcom Stars of the ’90s. The Coolest Cats Ever Who Were Sitcom Stars in the ’90s. The possibilities for cats and sitcoms were endless. But we went Big Tent. We wanted people to join us in the yelling and the crying and the pain. And now we’re here. Left with these songs. Four days have passed and voters have turned out in droves. But have we done right by a generation? Are these songs really the Songs of the Millennium?

The answer, of course, is no. They’re songs. And they were released during the opening moments of the next 1,000 years. What do they say about us now, as a society of consumers? Mostly, I think, that we feed on nostalgia like so much Fruit by the Foot. This is what we tell ourselves at Grantland HQ to reconcile the wreckage of the last six days. Here is what happened yesterday, you monsters. 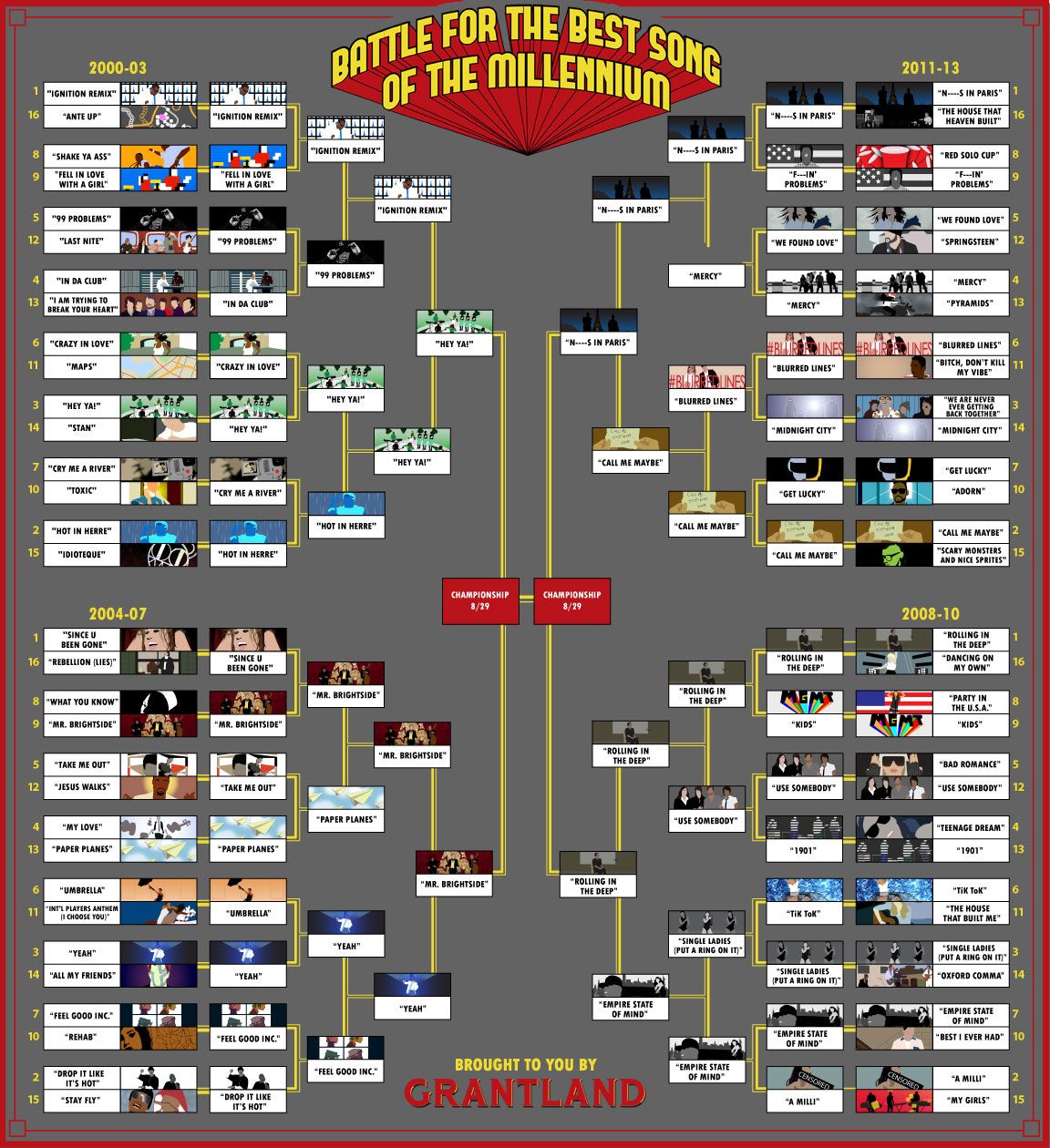 There have been bigger upsets in this exercise (see: next horrifying entry), but none have registered quite as painful a body blow. The day Grantland’s Senior Committee for Jams convened, I’d venture to guess that 80 percent of its members predicted “Ignition (Remix)” would win the whole thing in a walk. (An aside: Lost in a generation’s swooning over catered parties and all that “toot toot” is the original “Ignition” — a really good, crude extended Kellz midtempo sex jam. No one cares about this song anymore, if they ever did, but it deserves a Bob Dylan Bootleg Series–style restoration at some point. Are there other versions of “Ignition” banished to one of R. Kelly’s many hard drives? “Acoustic Version”? “Slow Grind Edit”? “Klezmer Version”? On second thought, let’s forget about the contents of the Pied Piper’s hard drives.)

Anyway, OutKast. More specifically, Andre 3000 — solo — took down the presumptive favorite, and handily at that. I don’t really know what to make of this, other than to assume that moment when everyone’s mom was saying “Shake it like a polaroid picture!” had some staying power? The first time I heard “Hey Ya” I liked it, but I understood that it would change my favorite rap group forever. And it has, for the worse. It sapped the continuity, the oddity, and the unity of Big Boi and Three Stacks. They’ve recorded together since, but they’ve never really been together since. Andre was always bigger and bolder, but he needed an anchor to keep him from floating away. The last 10 years of OutKast have been demonstrably worse than the first 10. I’m just being honest.

“Yeah!” garnered more votes yesterday than in its victory on Day 3. And it still lost by a margin of nearly 15 percent to a song we refused to seed higher than a no. 9. Romantics will regard the Killers as this year’s Gonzaga, or more recently, Butler — a mid-major with a solid program, and a dynamic man out front. (There’s an Adam Morrison–Brandon Flowers mustache joke to be made here, but let’s not and say we did.) And there’s some truth to that theory. Consider these similarities: the Killers’ Las Vegas home base and those mid-majors’ Southwestern roots. The Killers’ lockstep sound, and the mid-majors’ rigorous execution. The Killers’ overwhelming whiteness and, well, yeah.

But mid-majors typically surge to the late rounds with some combination of grit and ingenuity. Brad Stevens was one of college basketball’s progressive thinkers — that’s why he’s the new head coach of the Celtics. The Killers are revivalists; their songs are about 30 and 20 and 10 years ago. “Mr. Brightside” has a riff like a scythe and a chorus made for karaoke. But it is ultimately homage. Are we prepared to say that across the span of four very important years — years of terror, social unrest, a lurking financial collapse, and Fear Factor — that the Killers defined the time? Give me Usher Raymond in a laser club and a pair of Air Force Ones or give me death.

I am a New Yorker, born and raised. And I support this decision, America.

Save us, Adele. You’re our only hope.

So this is weird.

If you’ll indulge me a blowhard-y story: I was in a room at the Mercer Hotel in July 2011 with Jay-Z. (DO NOT DELETE HYPHEN, THIS IS HOW YOU SPELL JAY-Z.) It was me and a few other journalists and a publicist and the genius producer-engineer Mike Dean and Hov. We were there to hear Watch the Throne for the first time. At that moment, approximately 30 people in the world had heard the album, and so in the warped context of First! Internet fandom, this was a rare treat. Jay played the album in its proper sequence, and while we were taken with “No Church in the Wild” and its Frank Ocean chorus, and had our eardrums eviscerated by Beyoncé on “Lift Off,” it was not until “N—-s in Paris” was queued up that people in the room — journalists, ostensibly — stood up and started hooting. People who made eye contact with Jay-Z gave him the Oh, this is the one face. In these listening sessions, the drums are pushed way up in the mix, so it often sounds like you’re on the bombed-out front lines of World War I; the shrapnel is everywhere. “Paris,” as it later came to be known to radio DJs and white people, is an astonishing banger. I don’t think it’s in the top 10 Jay-Z or Kanye West songs ever. But still, it’s something: fast, aggressive, transgressive, tuneful, and of course, provocative. It barely has a chorus. What an achievement that it has made it this far, and with such unflinching power. Maybe with more time we’ll see that it is not the song of the past few years. But for now, it is the truest outcome yet.

The front end of this bracket is a mangled matchup: a no. 3 vs. a no. 9. But oh, the beautiful, balanced synchronicity of two no. 1 seeds staring each other down from across an illustrated, made-up competition. Adele, Kanye West, and Jay-Z are super-duper-stars. Theirs is the real showdown. It gets the people goin’.