With weeping and moaning and the gnashing of teeth, we move closer to determining a champion sound. Round 2! Almost every vote I cast in this one felt like a betrayal. But it’s like in that poem where the guy comes upon the beast in the desert, eating its own heart, and the guy asks the beast how its heart tastes and the beast looks up and says, “It’s just — I mean, like, this is exhausting, y’know, like … ?”

Um, I forget where I was going with this.

Oh, right: We do this because it hurts.

This is for Taylor: 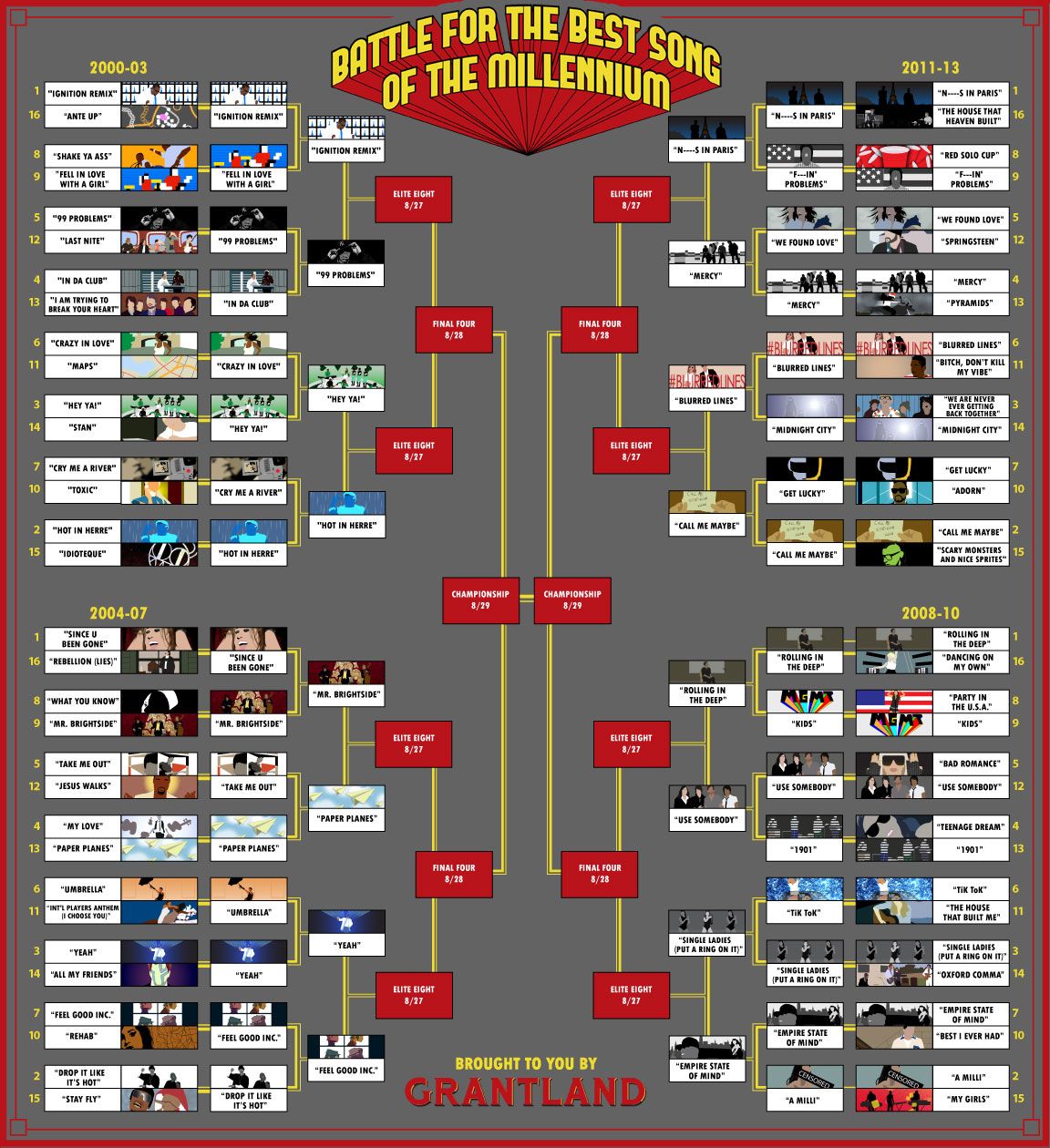 Once the parameters for this bracket were decided upon, I think it took about three seconds for somebody to call it for “Ignition (Remix)” right there in the room, before a single nominating vote had even been cast. It’s still my pick to win the show, the after-party, and the hotel lobby. It’s a perfect song. Every time you play it, an angel gives another angel that toot toot and that beep beep. “Fell in Love With a Girl” has rusty-nail guitars and Jack White hollering about a crush that feels like tetanus, but R. Kelly has “food everywhere, as if the party was catered,” which is the greatest simile in the history of similes. YOU ENJOYING THAT VEGGIE WRAP? CUT IN HALF JUST PERFECTLY, RIGHT? THE WAY A CATERER MIGHT DO IT? WELL, GUESS WHAT.

The only matchup in this bracket where the lyrics to the winning song mention the person who sings the losing song. I am writing this before the polls have actually closed, but as it stands right now Beyoncé has 17 percent of the vote and OutKast has like 80,000,000 percent, which suggests that this was an easier decision for most of you than it was for me. I felt like some evil sentient supercomputer was demanding that I choose which kitten to save from being pushed out the airlock into the chilly blackness of space. Anyway, good job voting for the hyper-buoyant pop song about how all relationships are doomed over the hyper-buoyant pop song about the sexiness of commitment, you heartless kitten-murderers.

“In da Club” is the coldest song ever to mention hugs, just under three and a half minutes of sneering triumph, a track so futuristic that Dr. Dre had to invent new headphones to properly reproduce its laser-finished contours. “99 Problems” is “99 Problems,” though — if it doesn’t go Final Four, I will break my desk in half using the rap-hands gestures I make when this song comes on at a wedding.

Not long ago, on a podcast I argued that Rihanna might end up being the most influential artist of the mid-to-late ’00s, having spawned a micro-generation of female singers operating in a genre we’ll colloquially call Sad Songs ‘Bout the Club. “Umbrella” and “We Found Love” are both so emotionally apocalyptic in tone that the delivery bulldozes the note of hope they’re supposed to strike. You voted for a song featuring 2 Chainz bragging about being drunk & high at the same time and an Usher et al. crunkgasm that sounds like being drunk & high at the same time feels, and I don’t fault you for that.

Well, yes. Well, of course. How good is “F—in’ Problems,” though? It feels like I’ve had this song in my head for 16 months, even though it’s less than a year old. “Yeah, I like to f—, I got a f—in’ problem” is the greatest dumb hook of the year. You can think of as many dumb Weird Al spoof versions of that chorus — “Yeah, I’m stuck on the first of the 12 steps, I got a f—in’ problem” — and they will still not be as perfectly dumb as the real thing.

Really? OK. Friendly reminder, though — “Since U Been Gone” pretty much single-handedly justifies the existence of American Idol, whereas there is only one Killers-related thing that is not a Beadazzled mason jar full of farts, and it is this:

I have no problem with this.

This, though: Are you people drunk and high and fucking kidding me at the same time? New Yooooo-ooork! I’ve got a gun, let’s go to a Broadway show! Broadway indeed: “Empire” is Jay Z planting the seeds for Hovi!, the jukebox musical he’ll license his catalog to when he’s 80 and needs some quick cash to buy Eleuthera. It’s Jay’s sentimental streak teaming up with his bottomless cynicism to beat you over the head with a foam Yankees no. 1 finger full of silver dollars. It’s not a song, it’s a Statue of Liberty keychain, a double-decker bus tour of famous crack spots that ends at Magnolia Cupcakes, a silver shovel throwing dirt on a mass grave full of poor people.

Plus it was in Sex and the City 2: The Quest to Make the Original Sex and the City Movie Look Like Citizen Kane. I voted for “A Milli” because I like “A Milli” a lot, but I would also have voted for “Gangnam Style” or “cleaning the bathtub” or a novel by Newt Gingrich. Oh, hey, wait, I forgot to mention Alicia Keys. I have a couple of dormant dumb-joke Twitter accounts that I’ve signed up for and never done anything with, and you know who Twitter is constantly suggesting that you follow, if you have yet to follow anybody? Alicia Keys! Which is smart, because people who don’t really know what they like tend to like Alicia Keys.

I’m old enough to remember when the Neptunes seemed like the dudes you got if you couldn’t get Timbaland; the fact that Pharrell and/or Chad had their names in the credits to more songs in this round than anyone except Jay Z says something about how dramatically that balance has shifted. Even though everyone claims to be sick of it, I’m not surprised “Blurred Lines” beat “Midnight City,” which is (admit it) more of a vibe than a song. I’m a little surprised that “Hot in Herre” beat “Cry Me a River.” But I’m stunned about “Feel Good Inc.” winning. I bet even the Gorillaz don’t think “Feel Good Inc.” is a better song than “Drop It Like It’s Hot.”

Grantland’s Juliet Litman insisted that Adele had this bagged up unless we imposed pre–19th Amendment voter-eligibility guidelines on the poll; if Adele keeps meeting ham-and-eggers like MGMT, I don’t see how this hypothesis will be disproved. Which is great, because it’s been like six weeks since Adele won something, and I miss hearing her say “Fank you.”

This one was recount-the-chads close as of 4:30 PT on Friday, which was surprising — I would have bet on a groundswell of rockist protest votes for the Kings over the French aristocrats. In his great book about another ridiculous band, the Doors, rock critic Greil Marcus wrote about the way radio (and therefore history) tends to compress oeuvres, reducing even great bands’ legacies to a single song, “as if they were forgotten hacks forever playing the same squalid dive with the same announcement on the door, the name of the one hit maybe bigger than the name of the act because you can always remember the song even if you can’t remember who did it,” and for Kings of Leon that song is probably “Use Somebody.” You know you’ve hit one into the upper decks of the pantheon when it spawns a country version and a panty-dropping cover by Trey Songz.