One week ago, Evan Ross — son of Diana, husband of Ashlee, stepfather of Bronx — made an announcement.

The son of Diana/husband of Ashlee/stepfather of Bronx was trying to tell us something: that a sequel was coming. But where was the fanfare? Where were the blog posts? Where was ATL 2 trending worldwide?

The answer is nowhere. This should have been Evan’s moment, to leak the biggest news of 2015. But instead, a week later — yesterday — it was TIP’s moment.

This photo — one of Rashad, Brooklyn, Esquire (Jackie Long), and Teddy (Jason Weaver), getting directions at a diner from what appears to be Chris Robinson, director of ATL — is what “confirmed” it. And at the posting of this photo — as well as a photo of T.I. and Lauren London (New New) — it was clear that this was actually happening. To those who enjoyed the film, this is either exciting news, a terrifying reality, or well, Drumline did get a sequel, too, so …

My take: shock. Because I was not consulted. Which is problematic, because I’ve already written the script to ATL 2.

Of course I have. What else do you think I do with my time? Read the Internet?

This script wasn’t written in hopes that this film would happen. I wrote ATL 2 in case ATL 2 happened. It was my DHARMA Initiative video, set to be a guiding tool for society should things turn chaotic.1 People get pressured into terrible decisions all the time, and if the presumably-set-to-eventually-air-on-VH1 sequel to the Grand Hustle version of The Breakfast Club became a reality, I wanted to be ready so they would at least have a foundation to stand on.

I stopped watching Lost during Season 2, so I don’t really know what any of that means.

But it appears they’ve decided to go on without me.

Is it insulting? Sure. Rude? Of course. But more than anything, it’s dumb.

T.I.’s King came out in 2006 on my birthday, March 28. And King was supposed to be the soundtrack to ATL, but T.I. made too much good music, so they put out a full studio album. Given the mountain of facts I’ve just laid out, of course I was the one who had to write the sequel. It’s not that I wanted to, it’s that I had to.

Who knows what will now happen to the real script of ATL 2? Maybe I’ll take it to a community theater back home in Atlanta and find people to perform the work. Maybe I’ll send copies to the cast the day the film is released, via Snapchat, just to remind them what could have been, and — seven seconds later — how quickly things can disappear.

Or maybe I’ll leak portions of the script on Grantland from time to time.2 Yeah, maybe I’ll do that. That seems like something I can do: Set up the first scene of ATL 2, on Grantland, right now.

Editor’s note: This is probably the first and last time this will happen.

FADE IN, WITH CHOIR HUMMING, THE SAME CHOIR FROM THE OLD ATLANTA FALCONS “RISE UP” VIDEOS:

The setting is a funeral. The year is 2011. Everyone you know from the first film is present, marching in a processional, dressed in all black. Everyone but ANT (Evan Rose) and UNCLE GEORGE (Mykelti Williamson). Because UNCLE GEORGE is dead. And they’re saying ANT did it. 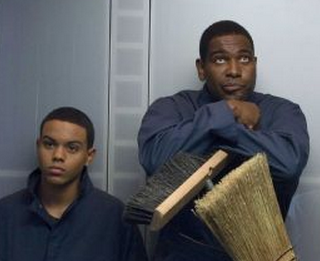 Good luck on your film, friends.