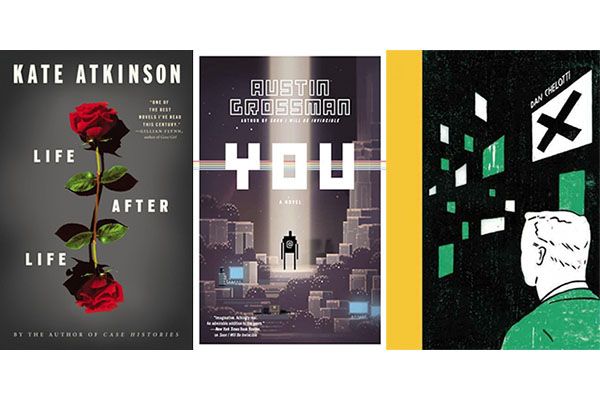 Life After Life, by Kate Atkinson

Ursula Todd has many pasts and many futures. Every time she dies, Ursula starts back at the beginning of her life, able to proceed differently the next time (think Groundhog Day meets The Butterfly Effect). Atkinson doesn’t spend much time dwelling on the whys of the cosmic trappings of her novel and neither does Ursula, who is barely aware that this is happening to her, except through a sense of chilling déjà vu that causes her to avoid repeating the same tragedies. Accept the metaphysics as a given, because Atkinson isn’t interested in explaining them. Instead, she wants to explore the bigger questions surrounding Ursula’s many lives: How does one life affect others? What is the value of a life when you have many of them?

These themes are explored on different scales, and Life After Life leaps back and forth in time, and between alternate histories. It can be a little disorienting at first, but Atkinson gives us just enough to go on that the narrative threads can be followed. We see how Ursula’s actions affect her own life and the lives of her friends and family. Toward the end of Life After Life, Kate Atkinson writes, “Sometimes it was harder to change the past than the future.”

Life After Life opens in England in 1910, and as the First World War looms large, Ursula’s decisions begin to affect the larger political landscape. The true centerpiece of the book comes in the Second World War when Ursula is recovering bodies from the post–London Blitz rubble — a scene that is as gripping as it is horrifying.

You’d think that when a novel started dealing with the outcome of World War II, the comparatively small lives of Ursula’s family and friends would begin to feel trite. And yet Atkinson has so richly detailed the lives of her characters, fleshed out and endeared to you over many iterations and timelines, that Ursula’s loved ones carry the same emotional heft as that of the world.

When I first started reading Life After Life, I assumed it was a mystery (Atkinson is best known for her Jackson Brodie detective series). I was driven to figure out which of Ursula’s lives represented the real timeline. But even though Ursula’s death varies drastically in each — stillborn, at the hand of an abusive husband, of old age, assassinating Hitler (seriously!), and so on — the end of each is the same: Ursula dies. Many fates, but also the same fate. And somehow, in this seemingly dark note, Atkinson reaffirms the power of life and how important it is to do our best for the lives that matter most.

I cannot recommend this book enough. It’s nothing short of a genre-bending masterpiece — thoughtful and compelling, convoluted in plot but clear in resolve. If I had many lifetimes, I would make sure to read Life After Life in each.

You, by Austin Grossman

Early in You, Russell, the book’s central character, says, “Let’s admit something about video games. They are boring … They are fun but don’t tend to make a person more interesting.” It’s not a line you’d expect to read in a novel about video-game developers written by a video game developer, but perhaps this is Austin Grossman’s sleight of hand at work: In the end, video games reveal so much about Russell and his cohorts at the fictional Black Arts Games, a company that must create and ship a best-selling game to prevent itself from going under.

At the heart of Black Arts is a game engine called WAFFLE, the brainchild of two of Russell’s childhood friends, one of whom, Simon, has recently died under mysterious circumstances. Even more baffling is a game-breaking bug that seems to haunt the code, which Russell suspects was intentionally buried by his late friend. Also, no one at Black Arts knows what WAFFLE stands for.

You is set in the late ’90s, and anyone who played PC games in that era will have an instant fondness for the games Black Arts is developing. But while nostalgia is one of You‘s appeals, it’s not what this book is about. I expect Grossman’s work will draw comparisons to Ernest Cline’s Ready Player One since they’re both about video games, but You has more in common with the techno-mystery core of Robin Sloan’s Mr. Penumbra’s 24-Hour Bookstore or the nerds-coming-of-age lessons in The Magicians series by Lev Grossman (who happens to be Austin’s twin brother). You is more about friendship and relationships between its characters than the technology that surrounds them.

Toward the end, Russell comes to this overarching conclusion about video games: “[The] secret of the ultimate game is that the ultimate game is a paradox, because there’s no way to play a game without knowing you’re playing it.” But this is the point of video games: the division between the game and the player. The way someone interacts with a video game, the way he plays it, can say so much about him.

Leading up to National Poetry Month (a thing), I read a handful of poetry collections. The standout was Dan Chelotti, whose surprising debut, x, is like experiencing a late-night hallucination, full of the strangeness and deadpan humor of a David Lynch movie. Chelotti likes to take specific experiences — interactions with people, sensory moments, pop-culture references — and draw them out into larger, sadder expressions. Chelotti talks about his cat, day-old sushi, and The Seventh Seal. “Sandwiches” are a recurring feature throughout the collection, often representing a pleasant banality of life. X is delightful in its weirdness, surprisingly heartbreaking in its compassion.

I’ll admit: Talking about poetry requires a vocabulary I don’t possess. So for validation, I e-mailed my coworker Bo, because he is a poetry expert and people named Bo like poetry, I guess. He replied, “x brilliantly straddles a thin line between flarf/slam-style poetry that exists for pure fun, and really hard-hitting modernists like Stephen Dunn and Jack Gilbert.” I felt validated, and it gave me an excuse to Google “flarf.”

My favorite poem in x is “If You Travel Far Enough … ,” and in the spirit of “show, don’t tell,” the publisher McSweeney’s was kind enough to let me excerpt it in its entirety for you here:

The captain once said

If you travel far enough

you will meet yourself.

Once at a faraway gas station

Hey Billy, how goes the day?

But I am not Billy. Not at all.

A mime at heart,

and tomorrow, I imagine.

You said it, Phil said.

He flopped a pack

of Camels on the counter

and punched a quick pick.

Going to CJ’s this weekend?

I always thought if I met

my double I would either

have sex with it or kill it,

with it by a gas station attendant.

—Excerpted from x by Dan Chelotti, copyright 2013 with permission from McSweeney’s.

TL;DR: If you at least felt guilty for rolling your eyes when I said “poetry collection,” this might be for you.

Kevin Nguyen (@knguyen) is a founding editor at The Bygone Bureau.