Nick Spencer doesn’t want to get boxed in. A bit ironic, then, that the atomic building block of his chosen medium, the comic-book panel, is literally a box. Spencer broke into the industry in 2009 with his creator-owned series for Image Comics, Existence 2.0, about a narcissistic genius who finds his consciousness transferred into the body of the hit man who murdered him. Since then, he has written an existential puzzle box questioning the nature of reality set in a sinister boarding school (Morning Glories); resurrected Superman’s Silver Age buddy, Jimmy Olsen (Jimmy Olsen #1); reimagined Spider-Man’s rogues’ gallery as a band of scuffling, blue-collar-criminal non-masterminds (the truly hilarious and not-to-be-missed Superior Foes of Spider-Man); and injected a much-needed dose of 1970s-style Parallax View paranoia into Marvel’s spy characters (the underrated Secret Avengers).

Spencer’s latest work for Marvel Comics,1 Ant-Man #1, is, from the ever-important standpoint of corporate synergies, his most crucial. Sure, this isn’t the first time Spencer has been entrusted with properties from inside Marvel’s and DC’s toy chests. But it’s a question of timing. With Marvel Studios’ Ant-Man hitting movie screens this summer — after a long and arduous journey through the development process that saw the driving force and raison d’être behind the film, writer-director Edgar Wright, leave the project mid-leap — Spencer’s Ant-Man series exists as a vehicle to build buzz (sorry) and reacquaint audiences with Scott Lang, a character who, for most of his existence, has lived in the shadows (sorrryyyy) of his more iconic compatriots.

Good news, and unsurprising to anyone familiar with Spencer’s work: Ant-Man #1 is wonderful. It’s a witty, brilliantly structured issue that manages to slip literal years of expository backstory into a candy-coated pill that left me thinking, Fuck it, I’m in. Perfectly realized by artist Ramon Rosanas, AM#1 combines the down-on-his-heels-thief-turned-hero vibe of Out of Sight with slick, techno-heist action that, one assumes, foreshadows this summer’s Paul Rudd tentpole.

I talked to Spencer on the phone recently about how he broke into comics, not being typecast, and Marvel’s tiniest, least (for now) cool Avenger.

How did you break into comics? I heard you were throwing pitches around when you were still in college and you got your foot in the door that way.

Well, I really didn’t. Joe Quesada [a former Marvel editor-in-chief and now its chief creative officer] was very kind back when he and Jimmy [Palmiotti] were at Event Comics, and they had just signed a deal with Marvel to do Marvel Knights.2 And I was a regular on Event’s website and so I knew how to get ahold of the guys and asked Joe if he would be nice enough to take some pitches from me. And, you know, he was very kind and agreed to do it. I did three of them and I remember the first two he had no real interest in.

In 1996, Marvel filed for Chapter 11 bankruptcy. Desperate for new ideas and, not incidentally, new revenue streams, the company hired Quesada and Palmiotti in part because the two had sold a property to DreamWorks and had connections in Hollywood. Marvel put the pair in charge of revamping Daredevil, The Punisher, Black Panther, and The Inhumans. “We wanted to show Marvel that we could do their characters better,” Palmiotti says in Sean Howe’s Marvel Comics: The Untold Story.

Do you remember what they were?

Click here for all of our interviews with fascinating people from the worlds of sports and pop culture.
Oh, god. I’m 90 percent sure that one of them was a Ghost Rider pitch and I feel like the other one was a Hulk pitch, but I don’t know if that’s right. What I do remember is the last one he did like, which was a Black Cat pitch. That was very much about her becoming a professional thief again and a peek into the lives of Spider-Man’s B-list and working-class rogues. So, really I pitched him Superior Foes way back then. He liked that one. But, you know, at the time, they were like, “We’re not actually looking for any pitches or anything.” So it was very nice of him to humor an 18- or 19-year-old kid.

There’s that saying in Hollywood, “One for you, one for me.” You’ve got that dynamic going pretty much simultaneously with your ongoing creator-owned stuff at Image and your work at the Big Two (DC and Marvel). Was that always the goal?

I personally feel like you should always be working from a foundation of creator-owned work. You should look for projects that you can build a shelf on, that you’re keeping in print, that you’re keeping a steady flow of interest in. Right now that’s Morning Glories,3 and I’ve got a lot of new ones in the works that, by virtue of how many of them there are, it’s taking a little while for them to get out there. But they’re all under way and being worked on. So that’s something I’m really excited about.

And things at Marvel are great right now. I really enjoy working at Marvel. They’ve been really good to me. It feels like lately, between Foes and Ant-Man and, before that, Cloak and Dagger, I think I’m getting a better feel for what works on the Marvel side of things. Things like the more recent work, it seems like people are really responding to it.

You really seem to thrive with lesser-known characters; would you say that’s accurate?

When you’re working on Spider-Man or The Avengers, a lot of ground has already been staked out. And there’s obviously going to be a lot of oversight of those characters because of what they represent for Marvel as a company. So when you get an assignment for a character that’s a little lower-profile, that maybe hasn’t had a great sales record in the past, you find a lot of open space by virtue of there not being a lot of writers working on that for a while. Also, you’ll find you have a lot more freedom in terms of what you can do with them.

I’m the kind of writer where I like to sift through a character’s backstory, kind of like the Geoff Johns school, [where you] dig through the library and you say, “What are the recurring elements here? What are the foundational elements? What are the things that are intrinsic to this character?” and you build from that.

I think if I were a millionaire and had, like, no financial concerns, you’d probably see me doing more kind of puzzling, long-form mysteries that are no fun to read until they’re completely finished. [Laughs.] I’ve kind of spent a lot of time on those kind of books, which can be very rewarding. With Morning Glories, we have a very die-hard fan base and lots of analysis of the book and theories about what’s going on. But this past year, I kind of said, “You’ve got some of those set up, so why don’t you remind people that you like doing character work and that you like writing dialogue and that you like trying to be funny.”

I’ve always been really paranoid about being boxed in. After Morning Glories hit, Marvel and DC wanted me to do every title that starred a 16-year-old girl and I had to turn down a lot of really good books because I just didn’t want to get too pigeonholed. 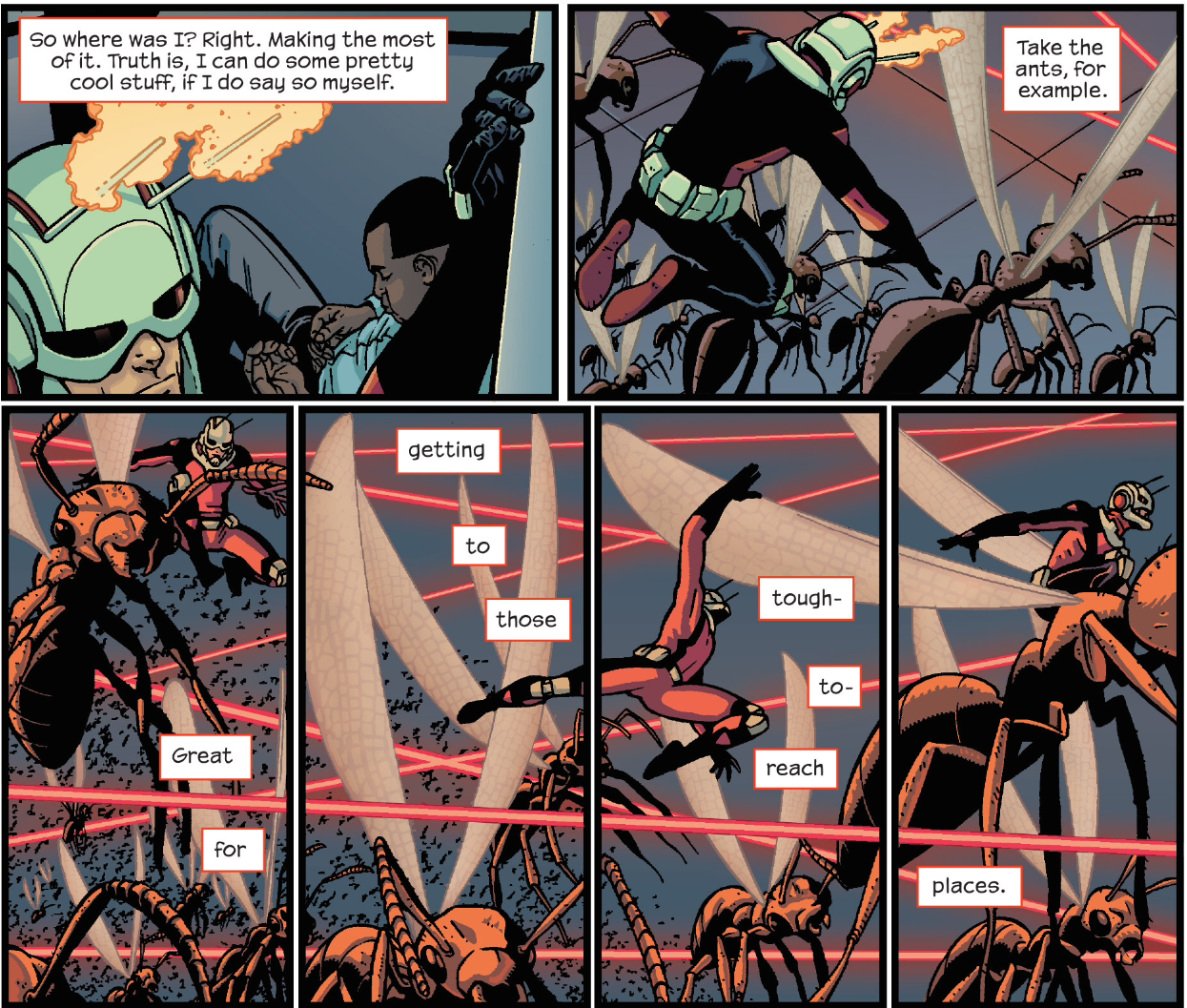 Ramon Rosanas’s artwork seems a perfect tonal match for the tone of Ant-Man. Same with Steve Lieber’s work on Superior Foes. How does that relationship start? Were you guys assigned to each other?

Well, Ramon was on the book before I was. He had done a book called Night of the Living Deadpool 4 and [Marvel editor-in-chief] Axel Alonso was a big fan of his work. So Axel already knew he wanted Ramon on the book. With Superior Foes, Steve Lieber had done a half an issue of Hawkeye, the Hurricane Sandy issue. I immediately asked [Marvel editor] Steve Wacker, “Oh, what about Lieber for this Foes book?” And, thankfully, Lieber said yes, and we’re off to the races. So sometimes it’s a suggestion from the writer, sometimes it’s a suggestion from the editor. You know, they didn’t get to their jobs by not knowing how to pair people. Marvel, especially, is really good for that.

“DP wakes from a self-induced food coma in a locked up Mexican restaurant. He finds a note left by the owner that they tried to wake him up but were not able to, so they locked the doors to hopefully keep the zombies out.” —Synopsis on the Marvel wiki

Did you pitch Ant-Man or was that an assignment?

I had a really good lunch with Axel a couple of summers ago at San Diego and we had sat down and talked about potential new projects. And I had mentioned that I had really wanted a crack at Ant-Man. But at the time it was still way too early and I think they were wanting to take their time with that, obviously, with the movie coming up. They wanted to make sure that everything was lined up perfectly. And I didn’t hear anything for, I guess, a year probably. Suddenly, Will Moss, who had been my editor at DC and had recently come over to Marvel, emailed me and asked me if I wanted to put together an Ant-Man pitch.

What’s your vision for Scott Lang and for the book going forward?

It’s really a new kind of experience for me. I hadn’t gotten to do a lot of solo, straight-up superhero books. I had done a lot of team books, ensemble books. And I had done a lot of assignments that were shorter in nature. So this is a book that I could very well be on for a long time. I want to do a book that is funny, but also has stakes and also has real action. I want to do a nice, long, solo superhero run that has personal drama and a colorful rogues’ gallery and has those kind of crescendo moments. But I want to do it a little more as a comedy. You know, like, 50 percent more humor, 50 percent more gags. It’s about finding that balance. So, I think sometimes you’ll see arcs begin with some very funny stories and then end on a little bit more of an action-packed or a little bit more of a serious note. I think it’s going to be interesting over the first arc, the first couple of arcs, to see how people respond to that.