Now more than ever, Hollywood depends on the eyeballs and wallets of citizens worldwide. And while “summer” box office season creeps earlier into the springtime calendar each year, the very idea of summer blockbusters has already migrated from a uniquely American notion to something much more worldly.

This week it was reported that Frozen surpassed Ice Age: Continental Drift as the highest-grossing animated film of all time in “international markets.” But in our globalized economy, that modifier seems gratuitous; what other kinds of markets are there? While navel-gazing American media remain obsessed with domestic box office returns, the studios — like almost every other major American industry — have logically turned their business strategies outward, beyond the confines of our 50 little states.

If it’s true that geography is destiny, then Hollywood’s destiny is rapidly evolving to accommodate the tastes of an emerging international filmgoer.

Just 10 years ago, American box office accounted for 51.3 percent of worldwide gross. Last year that number was down to 42.9 percent. In other words, about 57 percent of the total box office take these days is international. Some movies do better than others internationally, of course, and it’s these differences that may evince the most interesting trend this summer.

While the American film market continues to experience relatively tepid growth, its equivalent markets in places like China, Brazil, and the Middle East are exploding. As a result, the trends in Hollywood filmmaking/moneymaking will be increasingly tied to the tastes of foreign audiences. That makes sense, but what exactly are those tastes?

It’s foolish to try to generalize, but it’s clear that some kinds of pictures tend to succeed in international markets more than others, and you can’t forecast the future of American filmmaking without a basic familiarity with the geography of international film consumption.

According to boxofficeguru.com, of the last 20 films to gross at least $500 million worldwide, none made more money domestically than internationally — however, the ratio of foreign to domestic gross is far from consistent from movie to movie. For example, Ice Age: Continental Drift grossed four times more internationally than domestically. Life of Pi has a similar story. However, the first two Hunger Games films, which combined to gross more than $1.5 billion, exhibit the opposite trend: They did extremely well in the States, less so overseas.

Conversely, here are five that exhibit the opposite effect:

While it’s fair to label all 10 of these films “blockbusters,” they achieve that status in different ways. As a franchise, the Hunger Games films could soon be a relic, earning as much domestically as internationally, while films like The Hobbit, Skyfall, and, yes, the fourth Ice Age movie offer a different path to blockbuster status. There are a number of factors to consider when looking at these results: The English-language source-material issues of Suzanne Collins’s novels. The portability of cartoons. The international pedigree of James Bond. The undying appeal of Middle Earth.

Examining a map of last weekend’s box office–winning movies — a sort of unofficial worldwide summer season kickoff, mitigated by the international but not domestic release of The Amazing Spider-Man 2 — we can see at a glance that while the U.S. is still the biggest source of filmgoers, it’s hardly alone. The map identifies the most popular movie in each of 39 countries around the world and its attendant box office gross. 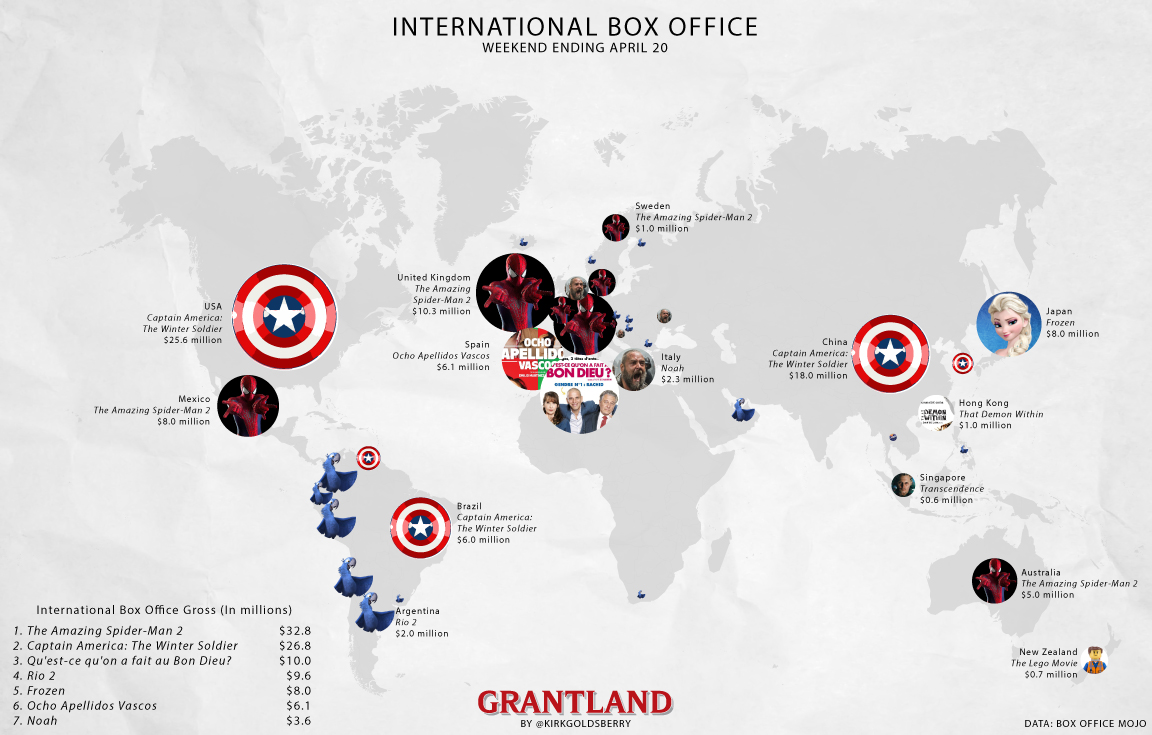 While, Captain America: The Winter Soldier made $25.6 million stateside last weekend, it earned more abroad — including $18 million in China alone. And given that nation’s rapid economic development, those numbers will likely seem ordinary in a few years, or perhaps even disappointing for a blockbuster comic-book movie.

The Chinese box office trends are both undeniable and stunning. Back in 2007, Transformers was the no. 1 overall movie in China; it grossed $37.2 million. Two years later, that film’s sequel was its no. 2 overall movie; it grossed $65.8 million. Sixteen weeks into 2014, Captain America: The Winter Soldier already sits at $98.3 million, and it’s only the third-highest-grossing picture in China thus far this year; Cheang Pou-soi’s 3-D fantasy The Monkey King has already grossed a staggering $167.8 million. AND IT’S APRIL!

Those numbers point to a Chinese audience that is poised to become the most relevant group of moviegoers on the planet. In turn, their tastes will increasingly influence the kinds of movies that will emerge from Hollywood studios going forward. You know, movies like The Monkey King, Captain America, and Need for Speed.

While Europe remains a vast source of box office income, it’s a less sexy destination to the marketing departments in Hollywood, for a couple of reasons. First, European countries lack the magnificent growth potential of Asian markets; second, American movies face stiffer competition from homegrown pictures over there. Last weekend, the most popular films in both Spain (Ocho apellidos vascos) and France (Qu’est-ce qu’on a fait au Bon Dieu?) were native. In fact, Hollywood films have “won” the weekend only six out of 16 times in France this year. Meanwhile, Ocho apellidos vascos has been the top movie in Spain for six straight weeks. That’s less common in other parts of the world. Hollywood productions have dominated the Chinese box office in eight consecutive weeks.

In a way, the massive shifts in the movie industry are not unique, and similar market changes are occurring in everything from fossil fuels to iPhones. However, when these shifts directly affect the look and feel of our precious summer blockbusters, they become more personal to the average American filmgoer. As the technological, cultural, and financial obstacles that have hindered the ability of Hollywood to reach Asia in the past dissolve at breakneck speed, the course is clear, and the good old days are gone with the wind. Once upon a time, Hollywood studios catered strictly to American tastes. And in a way, they still do — after all, what’s more American than unbridled global capitalism?