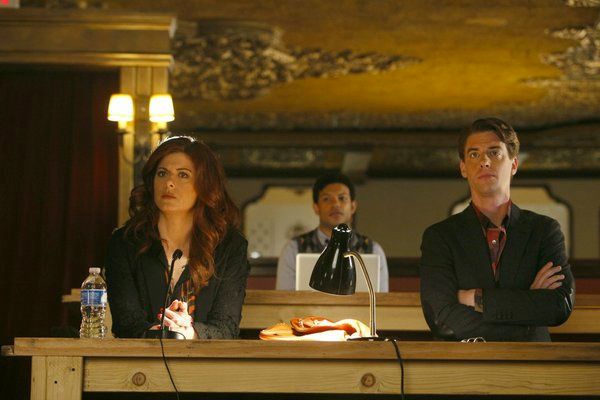 Hate-watching, 2012 buzzword and a more fun activity than working in a soup kitchen, has eluded Steven Spielberg, who until recently lived in a cocoon of blissful innocence without the knowledge that people hate-viewed Smash. “I have a choice — I can either watch all the dailies or I can follow the social media. I can’t do both,” he said, which also means that he can’t be expected to read Smash-related articles in The New Yorker when there are Bloxes to be Boomed. He was, however, aware of how you felt about the show’s ubiquitous scarves, which were fired from the cast when Joshua Safran took over as showrunner. Now they’re just doing commercial work and thinking about pursuing their master’s degrees.

• Adam Levine is set to host Saturday Night Live on January 26. I am guessing that the anxiety meter will register a very high read on this one, and I would also like to request that Wiz Khalifa drop by for the musical opening monologue. Thank you. I have needs here.

• Fred Armisen and Questlove in a drum-off on Late Night with Jimmy Fallon: impressive, but could have used more extreme drummer face.

• Time Warner dropped Current TV a few hours after it was sold to Al Jazeera, though it refused to acknowledge whether the decision to do so was politically motivated. The company also stated that it’s pretty sure the technician came to your door and rang the bell, but nobody answered, so he went away and can’t come back until next Friday.

• Gerard Depardieu, who now looks like Tony Sopraneaux, has been granted a Russian passport after the actor became publicly crankypants over a proposed tax hike. The Hollywood Reporter stated: “Putin’s spokesman later on Thursday said that the that [sic] Russian citizenship was granted to Depardieu “based on his significant contribution to Russian culture and cinema.” He added: “Depardieu starred in a number of very big projects, particularly he played Rasputin.” National treasure!

• Zooey Deschanel, greedy have-it-aller, wants to be a “fucking feminist” and “wear a fucking Peter Pan collar,” sadly unaware of the fact that a law was passed in 2010 stating that feminists may only wear turtlenecks to conceal their long, gray beards and unsightly word-talking mouths that should only be used for eating things with pink frosting.

• Bronson Pelletier’s human stain means you can never eat gumbo off the carpet of LAX again. Is that what “the most perfect” heroin does to a person? I’m so relaxed, man. This terminal engulfs me like a giant, warm Jacuzzi that I just want to piss in at my leisure.

• Grantland contributor Max Silvestri does mushrooms and sees The Hobbit, wrestling with his jacket like an Ab Roller and finding the druggie animal-healing wizard to be a little “on the nose.”

• Would you like even more drugs? OK! Frank Ocean was busted for speeding, having tinted windows, and possession when cops smelled weed in his car on New Year’s Eve. Every time I see a car with tinted windows, I’m like, “That car is so high.” Tinted windows are the equivalent of a car walking around the concession stand like this -__- grubbing for Red Vines.