The 27th Annual Nickelodeon Kids’ Choice Awards were held this past Saturday in Los Angeles. Mark Wahlberg hosted and many children attended. Even more watched from home, from 8 p.m. to 9:36 p.m. on the East Coast.

Aloe Blacc continued his tear of performing anywhere with speakers, as did Australian pop singer Cody Simpson (est. 1997). Harry Connick Jr. presented, as did Chris Rock’s daughter and John Cena. Pharrell’s hat was not slimed. Pharrell, on the other hand (seen here with Kaley Cuoco of Priceline.com fame), was very much slimed.

Awards were given out, including one for Most Enthusiastic Athlete, which went to Dwight Howard. And the first ever Kids’ Choice Lifetime Achievement Award was given to Dan Schneider, the producer of All That, Kenan and Kel, and Zoey 101. Kel came out to say a few words. 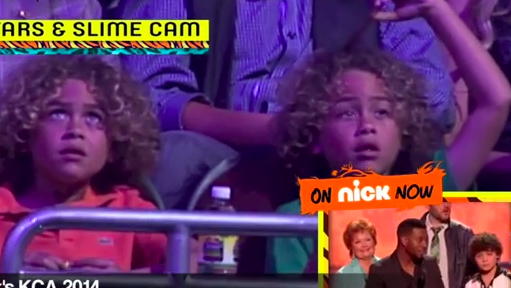 As for Kenan, he offered his thanks via video.

It was another laugh-filled, heavily watched award show, full of hijinks and memories. But among all the mayhem, a real milestone was achieved, one that fully disrupts the power structure that is Kids’ Choice Awards royalty.

That milestone number is the 10th Kids’ Choice Award for Adam Sandler. It’s a startling number of wins, but not the record. That would be 12 awards, and that record is held by Will Smith. Because of that figure — in addition to his long history of other appearances and offspring keeping him forever young — Smith would seem to be the rightful king of the Kids’ Choice Awards.

But after this 10th win from Sandler, for Grown Ups 2, it’s not that simple anymore. Because it’s bigger than just wins. It’s about how these two men have won. And that involves really looking into the numbers to  decide which of these ’60s babies is the true king of the Kids’ Choice Awards.

Let’s start with Will and his impressive track record.

The range of years (1989-2013) is an accomplishment in itself. That’s 26 years of award shows. As is the variety of categories in which he’s been nominated, from music to television to film. But the more you look at it, the more it looks like Will Smith leads the league in home runs and strikeouts. If you take out the Hall of Fame and Wannabe Awards (Wannabe Award = a non-voter input award for the person kids most want to be like), that’s 30 nominations and 10 wins. You know, 20 losses.

And then there’s Adam Sandler:

You take out the Wannabe Award and he has 10 total nominations. And he’s won nine times. If Will Smith is Adam Dunn, Sandler is David Ortiz in the 2013 World Series — both impressive, but one the stuff of legend. And putting that in even deeper context, Sandler’s got nine out of 10 in 16 years. Will, on the other hand, 10 out of 30 in 26 years. Still, it’s difficult to declare one more superior and deserving of the Kids’ Choice Awards belt. Which is why it’s officially time to apply the oldest human method for deciding a winner — the duel. Smith vs. Sandler: head-to-head.

Will Smith has lost to almost everyone, from Bill Cosby to Jim Carrey to Jesse McCartney to Lil’ Bow Wow. Also on that list: Adam Sandler. Three times. There was 2000’s Big Daddy performance over Smith’s Wild Wild West; 2003’s Mr. Deeds over Men in Black II; and 2007’s Click over The Pursuit of Happyness. As for Sandler’s only loss: 2009’s Favorite Movie Actor category for Bedtime Stories.

The winner: Will Smith in Hancock.

And you wonder why they’ve never done a film together.

Or why you haven’t seen them in a picture together since 1998, the year before all this Kids’ Choice beef began.

They’ve both been slimed (the Kids’ Choice Awards equivalent of the Presidential Medal of Freedom), both have Wannabe Awards, but Will also has a Hall of Fame award. And has hosted. And has performed. And has children who have presented and been nominated. And has better anti-aging cream. But his reign as Kids’ Choice King might be over.

This decade hasn’t been kind to Will, with his last win coming in 2009. Yes, he hosted in 2012, but his only nomination this decade was in 2013 and he lost to Johnny Depp of 21 Jump Street fame. Sandler, on the other hand, seems to be getting stronger, with three wins in the past three years.

This 10th win for Sandler certainly suggests he’s ready to take the crown. Or perhaps it’s already his. In the next 12 months, keep an eye out for highly subpar projects from these two, because just one could very well be the movie that places Sandler atop the Aggro Crag. Or that gives Smith a few more years of breathing room.