Editor’s note: This article appears in the July 17 issue of ESPN The Magazine.

My morning ritual used to go like this: Roll out of bed at 7:15, play with my daughter for a few minutes, suck down 185 ounces of coffee to wake up, then answer e-mails and zoom through Web sites for a couple of hours as “SportsCenter” blares in the background.

Then the World Cup started.

Much to my surprise, the 7:30 a.m. game quickly became part of my routine. Soccer, it turns out, is the perfect sport to watch while you’re doing other things. Maybe it’s that constant soothing sound, a never-ending din of cheering and singing in strange languages. Maybe it’s that you only have to glance at the TV every so often. Whenever something seems like it might happen, the play-by-play guy warns you with the rise in his energy level. There’s always time to catch a play before it unfolds … even though it usually ends with some exhausted striker rocketing the ball 25 feet over the crossbar. Maybe it’s that you know what you’re getting every time out: six or seven exciting plays, a game that ends at a specific time, no annoying sideline reporters or goofy camera angles. All in all, a peaceful two hours of competition. 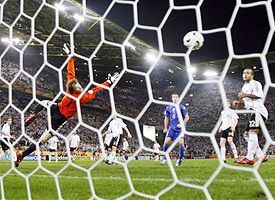 And when something does happen, it happens. There isn’t a more electric moment than a World Cup goal, especially one of those crazy ones, like when that Argentine absorbed a long cross with his chest, wheeled 90 degrees and whipped a soaring lefty kick to beat Mexico’s goalie in OT (degree of difficulty: 12.9). I looked up from Chad Ford’s 332nd online mock draft just in time to see it. Yes, this is the perfect morning viewing: better than old NBA games, better than Red Sox replays, better than anything on TV Land. On the morning of June 28, when I realized no games were scheduled, I actually made this noise: “Oh-awwwwww.” What was I going to do? No game? What now?

Does this mean I like soccer? Of course not. I’m a World Cup fan, not a soccer fan. Here are 10 reasons why:

1. I like watching anything that lets you say, “Hey, these guys are the absolute best of the best.” That’s why pro soccer will never catch on here: Nobody wants to watch a bunch of second-rate guys playing a sport that isn’t that interesting in the first place. Fundamentally, it can’t work. You have a better chance of uncovering a Star Jones-Al Reynolds sex tape.

2. These games feel like life or death. No, really. When the Colombian defender was murdered after 1994’s World Cup, the stakes were set: Screw up and you may die. You can see it on everyone’s face. After Argentina’s OT goal, the shell-shocked coach of Mexico looked as if he’d gotten a terminal diagnosis from his doctor. I half expected him to start hastily scribbling a will. For most of the countries involved, soccer is the equivalent of baseball + football + basketball here, if those sports came around only one month every four years. You can feel the tension. It’s suffocating. The winners are relieved, the losers decimated. There’s no in-between.

3. The red card/yellow card thing. Nonsensical, completely arbitrary, even crooked to some degree … I love it. Why hasn’t the NBA adopted this yet? Can you imagine how many yellows and reds the Mavericks would have gotten in the Finals?

4. There’s something fascinating about the underlying baggage in every game. My buddy Kurt e-mailed me last week, “If you’re a Nazi war criminal who escaped the Allied forces after WWII, who do you root for tomorrow: Germany, who propelled you to the top of their system, or Argentina, who took you in and helped hide your crimes against humanity?”

5. The postgame ritual of players exchanging sweaty jerseys cracks me up. Imagine if some Czech guy, drenched from running around in 95-degree heat for an hour and a half, handed you his shirt. Ah, gee, thanks … Can’t wait to put this in my duffel … No, really, this is great.

6. The whole player-with-one-name thing is fantastic. Nene tried to start the trend in the NBA, but it never caught on. There’s still time. Carmelo should legally drop his last name. So should LeBron. And the Clippers’ center should just go by Kaman.

7. You know my Remote Control Test that says you can’t deny someone’s or something’s appeal if you can’t flick the channel when he/she/it is on? (Like when some Sox fans wanted to trade Manny last season, I asked: Do you turn the channel when he comes up? No? Then why trade someone like that?) Well, no matter how you feel about soccer, would you ever turn the channel right before penalty kicks to decide an elimination game? Ever? In a million years? 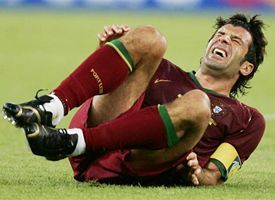 8. Everyone makes fun of the flopping, and it is hideous, but it’s also funny as hell. These guys drop like they were gunned down by a sniper, then they roll around for 10 seconds in absolute agony, heroically hop up and limp around to “shake it off,” and within 30 seconds they’re running full speed again. Even Ric Flair didn’t sell pain so well. More important, it’s the one thing that will keep soccer from ever, ever, ever becoming a bona fide force in this country. Americans won’t stomach such dishonesty. We see right through it. No way Dwyane Wade pulls that crap; we’d never allow it. OK, bad example.

9. The whole injury-time thing. I mean, what other sport keeps some arbitrary amount of extra time in an official’s back pocket? It’s so stupid yet weirdly effective. I’m convinced the guy who came up with that was drunk.

10. I have enjoyed soccer’s partisan songs and chants since “Victory,” when the crowd inspired Sly Stallone to stone Werner Roth’s penalty kick. Yes, part of it is that soccer fans need to invent ways to kill time because so little actually happens. But you have to admire their creativity. It makes you wonder why we don’t have more chants and songs for our sports. “Take Me Out to the Ball Game” brings down the house every time, right? So why stop there? We can’t muster enough brainpower to do anything but sing along to crappy music that blares from the PA? We should make chants for goal-line stands, for closers looking for one more out, for opposing players shooting free throws. Instead, we settle for an expletive (the one involving cattle) after bad calls. What’s wrong with us?

No, soccer isn’t so bad, and that brings me to my big question: Why put four years between World Cups? Long ago, someone decided that significant international sporting events should occur only every four years, and everyone else agreed, even though the reason was probably something like, “We don’t have planes yet, and since everyone has to arrive by boat, we’d better not do this too often.” Why not whittle the window to three years? Would anyone be against this?

When I asked my dad about this, he dismissed me, saying simply, “That’s the way they’ve always done it.” Well, if we used that argument for all things, we’d still be drinking tap water. So here’s my vote for a triennial Cup.

In the meantime, I’m preparing for life after soccer. So long, World Cup. My morning coffees won’t taste the same.