Lunchtime, at work. The subject is Aaron Horton’s Tumblr blog What the F— Is Michael Jordan Wearing? The phone rings.

Friend 2: I did. But I have to tell you. I don’t even know what to say. I mean, the site name says it all. What the fuck is Michael Jordan wearing? I didn’t know Color Me Badd had a Macy’s collection.

Friend 1: Macy’s? You wish. This is some strip mall mess.

Friend 2: I was sitting here at my desk looking at some of these pictures — like the one that says January 12th, with him and Derek Jeter. Michael Jordan has money. Even in these clothes, he looks like he has money. But it’s weird because he obviously doesn’t spend a dime of it on a tailor. Anyway, I’m looking at this, and people kept coming over to see if I was OK. I had to change my screen because I don’t want anybody to see this. It’s Michael Jordan. Whoever’s putting this up needs to be on a terrorist watch list.

Friend 1: What? I disagree. Do the ESPYs recognize humanitarian work? They should, and the person running this site should get a standing ovation. It’s Exhibit A for when A.I. and Kobe and Carmelo get up there. When you get into your 40s, you have to buy new clothes. You don’t have to look 48, but you don’t have to wear a power lifter’s pants, either.

Friend 2: The thighs on those jeans broke my heart. What leg would ever fit in there? What are those trees from Lord of the Rings? Somewhere, two of them are going cold.

Friend 1: I also think it’s important for everybody to see that black men can lose their cool, too.

Friend 2: Well, these clothes make you wonder if Michael Jordan was ever cool. I used to find him sexy.

Friend 1: You used to find him sexy on the court. Off the court, it was always crazy-print shirts and baggy jeans and weird suits. But at least it was crazy-print shirt and baggy jeans when those shirts and those jeans had some company. They had Scottie Pippen. They had Dominique Wilkins. They had Karl Malone and Hakeem Olajuwon. The sad thing about these clothes is that now they’re on their own. The Mailman has moved on.

Friend 2: Who is that in some of these pictures with Michael Jordan? Is she the girlfriend? And if she is, is it not in her interest to take him shopping? I mean, I know he probably takes her shopping, but she needs to return the favor. 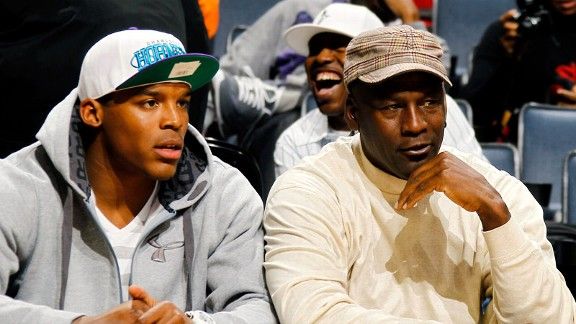 Friend 1: Did see you the January 19th one, where’s he’s freaking those two white girls in the club, with the cigar in his mouth?

Friend 2: I’m not even about to pull that back up. My boss is right over there, and the last thing I want to do is explain what Michael Jordan is doing trying to ride the train on two Girls Gone Wild.

Friend 1: Well, remember the T-shirt in that picture? What size is he wearing? I’ve been with some big men, but that seems impossible. It’s like he went to the tailor to make that shirt bigger.

Friend 2: What about the one with him and the friend in army fatigues?

Friend 2: Yes. That jacket with all those boxes and buttons and fabric? It looks like something Spike Lee couldn’t use for the zoot-suit scenes in Malcolm X. It’s so long you wanna send it to the free throw line.

Friend 2: The soldier’s face is like, “I love me some MJ, but get me the hell away from this coat.” Look at her hand. That jacket is burning her. It’s grilling her alive.

Friend 1: I won’t say anything about the couch blazer he’s wearing with Robin Thicke.

Friend 2: The “raymour and flanigan swag” hash tag says it all. But at least now we know why Robin’s new record is just OK. Paula Patton must have made Robin spend the night on that sofa. What about one of the other January 12th ones?

Friend 1: The one with him reading something at a game in that blazer and those pants?

Friend 2: The jacket looks like the backseat of a used Oldsmobile that somebody went into Fred Sanford’s front yard and skinned. The pants? I can’t even discuss the pants.

Friend 1: He must be reading instructions for how to stop your pants from pilling. Can pants even do that?

Friend 2: They shouldn’t, and that note’s from Prince. He needs his boots back. How can they even be Jordan’s size?

Friend 1: You know, I actually feel bad because he really doesn’t know. And I don’t know that there are many people who would have the heart to tell him to burn those pants. And the sweater vests. 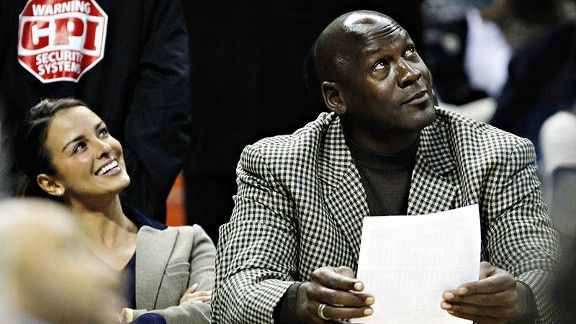 Friend 2: And the jackets — oh, the jackets. Wait-to-exhale, all of those.

Friend 1: I’m just saying, at some point, the world grew up with “If I Could Be Like Mike” and paying $125 for Air Jordans. We grew up with this idea that his casual style was just an extension of his court sense. We were brainwashed. That’s the only way to explain those Hanes commercials. We couldn’t even call him out for doing one in a Hitler mustache.

Friend 2: Whatever. He and Juanita got divorced 10 years ago, and he thinks this is how single men dress —

Friend 2: Like the pastor at the Ebenezer-Baptist Boyz II Men Church. Every time we go out, these clothes are at the club. But only on Michael Jordan could these clothes get you riding the train. Like, if he knows how ridiculous that mustache makes him look, he doesn’t care. He thinks his Michael Jordanness is bigger than that mustache’s Hitlerness. He thinks his Michael Jordanness is bigger than his obvious preacher-bachelor-midlife-crisisness. For him to do that to his face and leave the house and show up on the set of a commercial — a set with a crew — and still let the cameras roll means that his world is one person big. For him, it’s “Like Mike,” not “Like Hitler.”

Friend 1: This is the thing, though. The bagginess, the acid-wash and bleached and pre-shredded jeans, the flared pants, the mock turtlenecks —

Friend 1: Don’t they just say, “Hey, the late ’80s and the 1990s were good to me”? Don’t they just say, “I may be with this girl now — or with this one over here — but Juanita will always dress me”? This is a man who changed a sport at a particular moment in time, and for him to change out of that era, out of those clothes, would just be some kind of psychic betrayal.