Noah Vonleh has the second-largest hands ever measured at Indiana University. From a closeup of his face you might think he was a 14-year-old boy, but he is already 18, and he stands 6-foot-10, and when he holds a basketball, his hand completely engulfs one half of it. Seeing this, if you are used to normal hands, is a little like seeing a snake unhinge its jaw to swallow a melon. And in fact Vonleh’s wingspan measures 7 feet, 4 inches, the length of a boa constrictor. He has a good jump hook despite not being a powerful leaper, and in many of his best plays for Indiana he seems to come from nowhere, uncoiling the top half of his body to block a shot or pull down a rebound from what looks like implausibly far away. “Lacks explosive hops” is how the NBA scouting reports describe this quality, “but makes up for it with length and hustle.” He is averaging 11.6 points and 9.1 rebounds in just over 26 minutes a game his freshman season, and he is widely regarded, with Kentucky’s Julius Randle, as one of the top-two power forwards among this year’s draft prospects. If the selection were held tomorrow, he could go as high as fifth, to the Lakers.

I’ve been thinking about Vonleh, and about Indiana basketball, a lot lately. For a long time what I was thinking seemed too vague and complicated to put into words, but then I realized that it seemed vague and complicated only because it was so simple. What I’ve been thinking about is innocence. It wasn’t all that long ago, after all, that you would still hear people say they preferred college sports to the pros because the college game was “more innocent.” “Those kids are out there for the love of playing,” you’d hear. “It’s not all about the money.” That sort of thing. The increasingly public moral insanity of the NCAA has made that attitude harder to hold with any seriousness. But the longing it represents, which is one part nostalgia and one part fugitive romanticism and one part racial coding and one part actual niceness, is still strongly present in the experience of college sports. It’s there in the marching bands and cheerleaders, it’s in the corny mascots, it’s in the closeups of student sections rioting peacefully on TV. The only thing college sports offers over the big leagues, in the end, is a kind of atmosphere. But the atmosphere does so much. Like the Olympics or certain sections of the music industry, college sports has become its own antidote: It wants to heal the innocence that it itself is threatening to destroy.

In the world of the NCAA, the nicest stories are also the most cynical. They’re cynical precisely because of their niceness, because their niceness makes them appealing and their appeal makes them salable and their salability makes them untrustworthy even when they happen to be true. Noah Vonleh has a grin that could make you believe in Christmas and a story that could make you believe in Nike copywriters. Maybe you already know the particulars: How he’s descended from a Liberian tribal chief famed for his exploits in battle. How his mother worked as a nurse in Massachusetts, picking up extra shifts after she and Vonleh’s father divorced. How he spent all his free time in the gym from the moment he picked up a basketball. How, when his family went to Disney World, he ditched the park and spent 10 hours a day shooting hoops at an Orlando YMCA. How he’s hardworking and unassuming and humble and generally the sort of person of whom his own AAU coach could say, “God’s not done with him, and neither is Indiana.” I can’t name the exact distance between God and Indiana, but I imagine it was from someplace equidistant from those two points that I once heard a commentator say, “He’s everything Big Ten basketball is all about.” 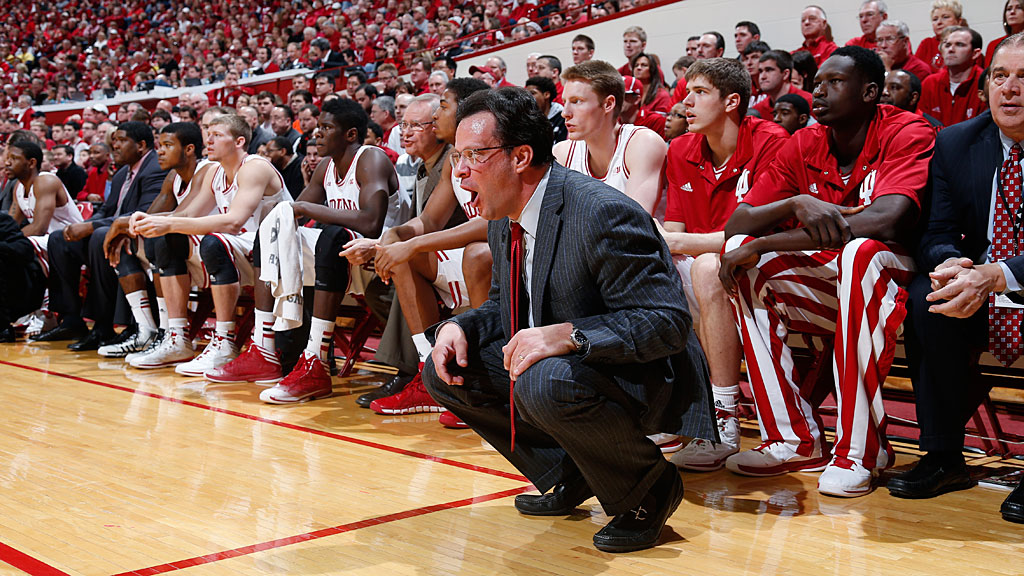 But what, really, is Big Ten basketball “about”? One of the obvious ironies of college sports, an irony present virtually from its inception, is that we want it to be edifying and yet frequently entrust it to thugs. Before the 1908 game against Yale, Harvard football coach Percy Haughton is said to have strangled a bulldog to death in front of his players;1 the parents of the same players were surely in agreement that their sons were learning many fine things about life from their sporting experience. Possibly they were right. We could go back further: One of the reasons soccer is so popular worldwide is that moralizing Christian schoolmasters in 19th-century England thought violent games would curtail homosexuality and masturbation among their aristocratic pupils. The pupils spread the game throughout the British Empire. Just as the schoolmasters expected, no one ever masturbated again.

History says he probably didn’t, but then history is an unreliable source.

The modern version of this problem is that we turn to college sports for the reflection of some vanishing American innocence, and yet many of the most visible figures within college sports are bullies and assholes. It’s an irony so ubiquitous it’s almost hard to notice, which is why the Indiana dynasty under Bob Knight was so helpful. You can ignore, say, Mike Krzyzewski snarling to his feet and spraying hatred out of a jaw as hard as a nutcracker’s; you couldn’t ignore Bob Knight.2 Those teams were the perfection of the form. No place was nicer than Indiana, so green and flat and lovely, and no fans were more passionate about basketball, and no movie seemed more innocent than Hoosiers, and the players wore candy-stripe warm-up pants and graduated, and the old lady pushed her mop, and everyone said the right things. Disrespect was as unthinkable as losing.

It was exactly the world that college basketball is “all about,” only somehow at the center of the orb was a sullen despot, a man so visibly angered by the fact of existing in his own skin that he could awaken your fight-or-flight response merely by appearing on television. He coached the best teams. He choked his players. He raised money for the library. He perfected the motion offense. He came out of a bathroom stall and showed his squad his used toilet paper. He won three national championships.

There are people who think Tom Crean, the current Indiana coach, is no picnic to be around either, though no one would suggest he’s an ogre in the mold of Knight. After spectacularly resurrecting a program drugged and left for dead by Kelvin Sampson’s recruiting violations, Crean has this year fielded a team that’s underperforming its own modest expectations. (Indiana lost its four leading scorers from last year’s no. 1–seeded tournament team, was projected to finish at worst around .500 in Big Ten play, and is currently 6-9 in the conference after outlasting a reeling Iowa team last night.) Its tournament prospects are cloudy. Whatever the Big Ten is all about, it isn’t the spectacular.

The mood on Hoosiers message boards is bleak. On February 2, fans booed Crean’s substitutions against Michigan, in a game Indiana won by 11. It’s only one rebuilding year after a season in which the Hoosiers spent 10 weeks ranked no. 1. But Crean’s attempts to convince his detractors that the roof isn’t falling in on the program haven’t been helped by the roof literally falling in on the program: An 8-foot metal beam crashed down from the ceiling of Assembly Hall into some empty seats earlier this month, forcing the postponement of Indiana’s game against Iowa. You can say what you like, but some metaphors are invincible.

And all this leads to the following situation, which strikes me as emblematic of the condition of college basketball in 2014. If the Lakers and the Jazz keep losing at a moderately respectable clip, it will almost certainly be a better move for Vonleh to declare for the NBA draft than to return to an Indiana team that could struggle again next season. On the other hand, another disappointing year would make some people with a lot of money very willing to think about revising Crean’s employment status.3 To do what’s best for Vonleh, Crean has to urge him to go. To do what’s best for himself, Crean has to keep his most talented big man at all costs. So the cynical outcome involves college basketball keeping one of its most innocent players for another season. The innocent outcome involves college basketball losing that player to a whole lot of NBA money.

Vonleh played his worst offensive game of the season against Iowa on Thursday night, scoring four points on 1-of-2 shooting; in the two games before that, he’d scored 30. Crean, who publicly questioned Vonleh’s aggressiveness just two weeks ago, spent this week praising him. He’s quoting Proverbs on his Twitter feed. You can interpret all that any way you like, of course. You can interpret anything that happens in sports. The people who loved Bob Knight saw him the same way the builders of cathedrals saw gargoyles, as a monster who kept the other monsters at bay. The rest of us wondered how the demon got inside the church.