Let us say at the start that, if you liked Sunday night’s hysterical extended exercise in frostbitten football — won by the New England Patriots, 34-31, over the Denver Broncos in Foxborough — then you’re going to love this year’s Super Bowl, which is going to be played in February, in the open air (such as it is) of New Jersey. There were plenty of signs and wonders Sunday portending a Super Bowl of almost spectacular eccentricity. There was a cold north wind that turned every long pass into a wobbly balloon and made every punt returner look like a man trying to catch a feather dropped from a skyscraper. (The game-winning field goal was set up by a New England punt that bounced up off the ground and hit Denver’s Tony Carter in the hand. The fault, ironically, belonged to former Patriot Wes Welker, who ended his return to Foxborough by failing to call Carter off the bouncing ball in time.) Fingers turned to stone and then to fragile ice; the first three New England drives ended in fumbles, one of which was returned by Von Miller for the first Denver touchdown. In all, the teams combined for 11 fumbles and lost six of them. New England’s LeGarrette Blount fumbled and got knocked silly on the same play. His teammate, Julian Edelman, dropped the same punt twice. The game was only Dorothy Hamill and a chorus line shy of being a performance of Holiday on Ice.

In fact, the elements were essential to the game’s most critical decision — Bill Belichick’s choice at the beginning of overtime to play with the wind behind him rather than to take the ball. This briefly bumfuzzled his captains, who won the toss and pretty plainly were unsure what the old man wanted. “That’s Bill,” said New England safety Devin McCourty. “He’s a genius.”

The night was more than a meteorological freak show, however. It was a display of considerable toughness by the Patriots, who were down 17-0 almost before Al Michaels had uttered his first banality, and who trailed 24-0 at halftime — and were lucky to be that close. It also was a game to give pause to anyone who’d already punched Denver’s ticket to the frozen chemical tundra of the Meadowlands. The Broncos simply took the third quarter off, inexcusably letting New England back into the game. In addition, lest we forget — and for any of our readers who don’t speak fluent NFL Hype — it was also Brady-Manning XIV, and it was as big a mismatch at the quarterback position as this particular rivalry ever has seen. After halftime, Brady was magnificent. He ended up, gales be damned, completing 34 of 50 passes for 344 yards, with three touchdowns, no interceptions, and a quarterback rating of 107.4.

(And again I voice my distrust of any statistic that insists that perfection includes decimal points. Thank you.)

Meanwhile, gifted with a huge lead, Denver quarterback Peyton Manning simply petrified over the first 50 minutes of the game. He was 11-for-25 in the second half and threw a groaner of an interception that set up the touchdown that put New England ahead, 28-24, at the beginning of the fourth quarter. He did manage to get Denver into a tie in regulation, but Denver decided to pass in overtime, and incompletions killed off both drives. That left nothing for the Patriots to do except wait for the inevitable botched punt return, which Nate Ebner fell on at the Broncos’ 13-yard line. Two plays later, Stephen Gostkowski kicked a 31-yard field goal and everybody ran for the locker room, the bus, or anyplace else where the wind didn’t blow. 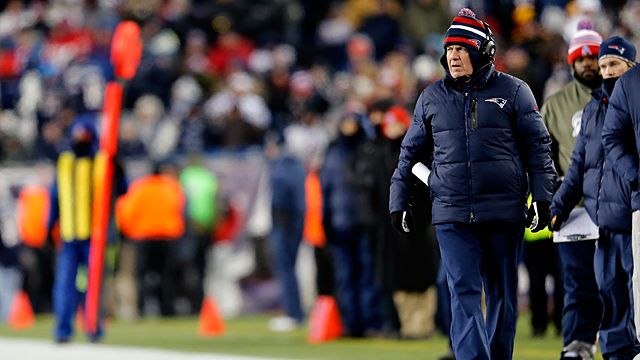 With December almost hard upon us, it’s difficult not to think in terms of Tom Brady in winter. He’s in his 14th season as an NFL quarterback. His team has changed completely around on him; he is working with young and unfamiliar receivers. He has had some “episodes” with the referees; he even had one Sunday night, with 10:20 left in overtime, when Denver’s Quentin Jammer applied what appeared to be a grand amplitude hold to Kenbrell Thompkins, and you did not need great lip-reading skills to determine that Brady was not impressed with the back judge’s ancestry. There is more than a little talk — of which, I guarantee you, he is more than a little aware — that the sound you can hear in the distance is that of his window slowly closing. Nonetheless, Sunday night, playing from behind the Broncos and against the elements, he managed to remind everyone why he has had the career he has had in New England.

“You’ve got to put a lot of the stuff aside,” he said. “You’ve got to forget about what happened in the first half, because it was a terrible half of football. I don’t even know what you coach at that point, you know? So we came in and we talked about some of the things they were doing that we needed to do. We needed to put together some good plays which would make a good drive, and if that happened to be a few good drives, we’d be back in the game, which ended up happening.”

The third was as good a quarter as Brady has ever played. He hit on 12 of 14 passes, none of them spectacular but all of them precise. On the opening drive, he chopped the Denver defense to ribbons with six straight completions. (In this quarter, it should be noted, he was helped in his play-action by Brandon Bolden, who put up 58 crucial rushing yards in the game and was the only New England running back who managed to hang on to the football with any regularity.) When Denver fumbled the ball back on its next possession, Brady mixed two runs and three passes, sending Bolden into the end zone from a yard out to cut the lead to 24-14 after the extra point. By this time, the Broncos were completely at sea, especially their secondary. Shortly before the end of the quarter, Brady hit Rob Gronkowski for a six-yard touchdown that pulled New England to within three at 24-21 and, in celebration, appeared to be ready to head-butt Gronkowski’s melon off in the general direction of Seekonk.

Brady has a strange team around him now. He came into the season with all of his primary weapons from last year gone. Danny Woodhead is woodheading around San Diego, and Welker was on the opposite sideline Sunday night. Meanwhile, of his two young and talented tight ends, Gronkowski didn’t get healthy until recently and Aaron Hernandez is sitting in a jail cell, accused of killing a dude. Brady probably has better options at running back than he’s had since Corey Dillon was carrying the ball, but Stevan Ridley has a fumbling problem that’s moving into Steve Blass territory. Brady spent the first half of the season trying to hold together a team that was damned near embryonic. It had no identity.

“Yeah, it’s a little bit better in a night like tonight where the weather conditions are a factor, you’ve got to figure a way to do different things, and they try to stop those things and you have to figure out something else to do,” Brady said. “We’ve been a little bit more consistent on offense and we need to keep being that way and keep really leading the charge.”

The most fascinating thing about Brady’s season is watching him develop trust in the young and unfamiliar cast he has around him. This is particularly the case with Thompkins, a rookie out of Cincinnati who hit training camp this year with a pocketful of swagger and hasn’t lost any of it yet. Sunday night, Brady spread his passes around to six different receivers; Edelman caught nine balls, and running back Shane Vereen caught eight. Thompkins got six catches, all of them in the second half, when the game turned around.

“He made some big plays last week. He gets his opportunity and takes advantage of it. That’s the great part about him,” Brady said. “He’s a real fighter. He’s a tough kid and he wants to do what’s best for the team. He’s got a great attitude and I love being his teammate.”

Kenbrell Thompkins will be one of Tom Brady’s last teammates, one way or another. The winter is coming. That may be a metaphor, it may not be.