So many times in sports, a potential juggernaut gets built in the offseason and everyone goes overboard wondering about its invincibility. … And then, the season starts and the team doesn’t look like a juggernaut. But “Patriots 38, Jets 14” was one of those times when the potential juggernaut actually looked more unstoppable than it had on paper. This was a complete and total decimation. That’s the best way to describe it: A decimation. 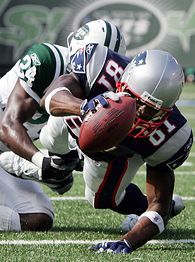 I watched the game at my friend Jimmy’s house, where he has a big plasma surrounded by three smaller plasmas in the kitchen (where all the food is). The Pats-Jets game earned “big plasma” status for two reasons — it was the best early game, and half the guys there were either Pats fans or Jets fans. Near the end of the third quarter, we all agreed the game could be moved to a smaller screen. Midway through the fourth quarter, we bumped it entirely for a closer game.

Here’s the point: In six years of going there, I don’t ever remember saying, “Yeah, that’s fine, this game’s done, I’ll watch the rest on TiVo later” about a Pats game before the end of the third quarter. Even when they won two straight Super Bowls and had the 21-game winning streak, they were beating teams because of their experience/coaching/smarts/clutchness/teamwork/defense/efficiency. They weren’t just blowing opponents away with both barrels.

Look at their 2003 and 2004 seasons … for dominant teams, those Patriots weren’t exactly churning out 300-yard passing days, 175-yard receiving days, 150-yard rushing days and blowout victories. They had a knack for controlling games but never totally putting a team away (with the Super Bowls against Carolina and Philly being the best examples). You never wanted to turn them off and chalk up that “W” until the final few minutes, that’s for sure.

The first Sunday of 2007 was different. They killed the Jets. It was a massacre. When a team wins 38-14, on the road, without forcing a single defensive turnover, you know it has been a one-sided game. Randy Moss received most of the attention afterward, and rightfully so — don’t worry, we’ll get to him — but the nuts-and-bolts story was New England’s offensive line (if the line blocks like that for 17 weeks, Brady’s jersey won’t have to be washed) and New England’s front seven (which stuffed Thomas Jones and harassed the Jets’ QBs for four quarters). It was such a dominant performance that we didn’t learn anything about the Jets. Are they good? Are they a top-10 team that was simply outclassed? It’s impossible to say. We’ll know more next week.

All I know is this …

For lifelong Pats fans, you can’t imagine how thrilling it was to watch Moss run amok in the Meadowlands. This was like upgrading from a station wagon to a Ferrari, only if you’ve been driving station wagons for 40 years. There have been five elite New England receivers in my lifetime: Harold Jackson (who had a monster year in ’79), Stanley Morgan (graceful and underrated), Irving Fryar (never peaked until he found God in Miami, although he peaked from an Unintentional Comedy standpoint in New England), Terry Glenn (a quality deep threat for Bledsoe for a few years) and Troy Brown (unstoppable as a slot guy in 2001). Everyone else ranged from “awful” to “very effective.” As far as I can remember, four Pats receivers have made the Pro Bowl since I was born: Brown (’01), Glenn (’99), Fryar (as a kick returner in ’85) and Morgan (four times). None of them was overpowering. None of them could rip the heart out of an opposing team. None of them could silence 60,000 fans on the road and have them wonder aloud, “Uh-oh, how do we stop this guy?”

So, we trade for Moss in April and everyone’s pumped. (Here’s the column I wrote when it happened.) Even when non-Pats fans were playing the “He’s gonna break your heart” and “He’s gonna kill your team chemistry” cards, we didn’t care. We were too pumped by the possibilities — after all, Brady had never had a true deep threat before, and when Moss showed up for minicamp and said all the right things, we were even more delighted.

Summer rolled around, and we became distracted by the KG trade, the Sox-Yanks battle and the increasing possibility that J.D. Drew could be the Antichrist. In the middle of everything, training camp started and Moss quickly tweaked a hammie, then started missing preseason games. Uh-oh. Suddenly, we weren’t as pumped about the Moss era. Right before final cuts, rumors started swirling that Moss wasn’t healthy and might get sent packing. Didn’t happen. Now, our expectations had been lowered to “Well, maybe he can limp out there and be a decoy.” Heading into the Jets game, when more rumors swirled that Moss might play, everyone took the old wait-and-see approach. Rightfully so, by the way.

Randy Moss tears up the Meadowlands. Nine catches, 183 yards and two plays nobody has ever made in franchise history — a 33-yard catch down the sideline in which Moss effortlessly jumped in traffic and hauled in a pseudo-lob pass, and a 51-yard touchdown in which Moss sprinted downfield, drew three defenders, then kicked it into another gear and basically ran a delayed crossing route to haul in a Brady bomb for six points. Everything would have been exciting enough on its own, but when you factor in the variable that NOBODY SAW ANY OF THIS COMING IN WEEK 1, the collective giddiness was practically indescribable. Right after the 51-yard crossing route TD, my dad answered the phone cackling maniacally like Herm Edwards. We all felt that way. You just wanted to cackle maniacally and say “Can you believe this?” over and over again.

The truth is, nobody knew how good Brady could be statistically because he has never had an above-average group of receivers, and nobody knew how good Moss could be because he hasn’t had a reason to give a crap in four years. In the postgame news conference, there was a genuine defiance about Moss as he answered questions from reporters who wondered whether Moss felt vindicated about what happened. It was as if he wanted to scream, “Look, I’m Randy F—ing Moss! I’m still the best! I just spent the past three years playing with Daunte Culpepper, Andrew Walter, Kerry Collins, Mike Tice and Art Shell! I’m on a real team, I have a real QB and I’m playing for a new contract — this was not an aberration! All right? Get used to me making plays! OK! I am what you thought I was! All right!”

What’s going to happen the rest of the way? You got me. I just know that the ceiling has been removed for the 2007 Patriots, and that no Patriots receiver has ever ripped through an opposing defense like Moss did Sunday. In Monday’s Boston Globe, Dan Shaughnessy made an astute comparison of Brady and Moss to Larry Bird teaming up with Bill Walton in the ’86 season. Obviously, that’s the ceiling for the Brady/Moss era, because Walton’s energy and ingenuity pushed that Celtics team to another level, and he was just as much of a risk in 1985 (because of his feet) as Moss was in 2007. Here’s the big difference, though: The Celtics gave up the ’81 Finals MVP (Cedric Maxwell) and a No. 1 pick to roll the dice with Walton. The Patriots gave up a fourth-round pick for Moss, and that’s it. So far, that pick has been worth one win. And counting. Whether the trade eventually ranks up there in the Boston Heist Pantheon with “Joe Barry Carroll for Parish and McHale” and “Heathcliff Slocumb for Derek Lowe and Jason Varitek” remains to be seen.

Today? It’s looking pretty damned good. I thought this e-mail from Steve in Amherst summed everything up: “My favorite moment happened after Moss caught that amazing TD pass, after all the players were mobbing him in the end zone, Brady walked up to him. The two of them just stood there in the end zone for a second looking at each other, smiling. Then they hugged and ran off the field. I don’t think either could have been happier. This is a special team, and I can’t wait for more.”

Me neither. In fact, I think I’ll call my dad at work just to hear him cackle maniacally again.