One way to understand professional sports is as the commodification of innocence. If that sounds like a contradiction, then welcome to the irony at the heart of fandom — welcome to human nature, too. We’re forever being sold what’s essentially the vision we first had as children, this bright, clean world of colorful uniforms and fair play and stars who are good people and stars who love their teams. We know this vision is false and we buy it anyway. We believe it and we don’t believe it. We create a little space in our heads in which it’s allowed to seem kind of true, and then we never quite close that space, even when it’s under siege from everything else in our experience.

It’s always been this way — the first instance of corruption in sports I’ve personally written about took place in 1810, in a championship fight in a muddy field outside London, at a time when sportswriters were piously selling boxing as an incubator of national virtue. (It was racist and full of crushing head injuries, so about as virtuous as the British Empire overall, I guess.) Now an entire talk-radio alt-culture exists to skiff across the murky channel between what we know and what we refuse to disbelieve. Vinny and the Pooch on 570 AM — their whole act is built on the idea that no one’s been around more blocks, or in uglier cars: that no B.S. is thick enough to fool them. They tell it like it is. But when they start ranting about how one guy or another is a clown or a disgrace, it’s usually for a sin that would maybe surprise a 10-year-old. Their pseudo-cynic routine indulges both sides of your double consciousness: First it makes you feel knowing, then it plays to your apple-pie fantasies.

What We Learned: The 2013 Roundtable

Our experts weigh in on the continued proliferation of advanced stats, the year’s most exciting sports moments, and what to look for in 2014

Andrew Wiggins, Jadeveon Clowney, and what happens when we get too excited about athletes too soon

So 2013 was not the year when sports lost their innocence, because nothing involving a dollar and human competitiveness has ever been all that innocent. (If you want to experience some chilling shit, watch little kids playing Monopoly.) But it was a year when the two halves of the fan experience completely delaminated from one another. Between concussion scandals, PED scandals, match-fixing scandals, construction-workers-dying-in-quasi-slavery scandals, fallen icons, lawsuits, investigations, homicides, suicides, bombings, and lies, you couldn’t watch sports in 2013 and not know that things were deeply, anatomically messed up. It was not possible to pretend, even if you wanted to, that things were mostly fine. And yet you went right on watching, and while you were watching you probably didn’t think much about how toxic the system was. You just thought about all the fun you were having, because in 2013, sports were also as exciting and beautiful and great as they’ve ever been.

We spent 2013 in a strange state of un-innocence. Fully aware that we couldn’t love sports with an entirely clear conscience, and fully aware that we still loved sports, we somehow decided that those awarenesses just … didn’t need to be resolved. They were like two bubbles that would pop if they touched each other, only they didn’t touch each other, because we figured out a way to keep them apart.

In late August, the NFL agreed to pay ex-players $765 million to settle a concussion lawsuit, causing both widespread outrage (the deal was seen as a win for the league over the players it exploited) and a new set of hard looks at the league’s suicide epidemic (four in eight months during 2012 alone). In early September, 25 million people tuned in to watch the Broncos beat the Ravens in the league’s season opener. So it went, all year. In October, the Guardian reported that “hundreds” of migrant workers, held in Qatar in a state of near-slavery, had died constructing venues for the 2022 World Cup. In December, the world nevertheless cheerfully consumed the doofy spectacle of the draw for next year’s World Cup in Brazil, which included FIFA president Sepp Blatter going full Apollo Creed with the entrance: 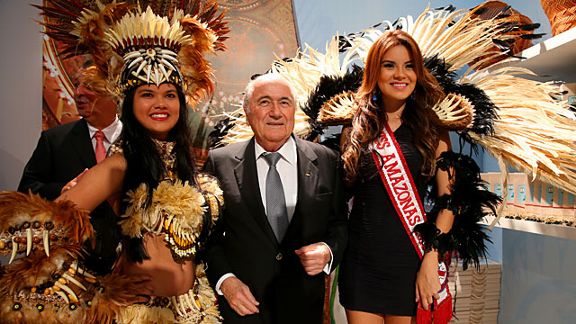 This was the year when we all came to terms with the new way in which sports can embody cynical capitalism. The old way was about disapproving of greedy players (they say they’re loyal to the club, but they’re really all about the money!) or owners who sneak the franchise out of town in the middle of the night for a tax break. In other words, it was about how the people who make the games disappoint us or wrong us as fans. The new way is about how the games themselves can destroy the people who work at them — can leave them with a disintegrating brain, as in the NFL, or kill them outright, as in Qatar. In other words, it’s no longer about how a backstage glimpse at the theater of commerce outrages our perfect ideals, it’s about how our participation in the commercial enterprise of sports actually helps wreck lives. We’re implicated in this, for a bunch of obvious reasons. And yet … Peyton Manning is playing so well, and the USMNT has to go to the Amazon, and it’s all right there, and the flags are waving. And everyone’s watching.

Un-innocence doesn’t mean that fans don’t care about concussions (the NHL got its own lawsuit this year) or about preventable deaths. Or about the Dolphins’ locker-room hazing scandal, or the A-Rod doping witch hunt,1 or the Jameis Winston sexual-assault investigation, or Lance Armstrong confessing to Oprah, or any other symptom of the increasingly inverted relationship between sports and social systems. It doesn’t mean we’re numb to the fact that a Patriots tight end was charged with murder in June, and that people connected to the case keep dying. It means that we spent 2013 caring intensely about all this stuff, following the stories, feeling sad, betrayed, angry, etc. — right up until the moment when the camera zoomed in and we could see Ed Hochuli’s breath. And then we shifted, with no friction, into a different mental rule-set, and ate chips.

Sub in “quest for pure and firm justice” for “witch hunt” as desired.

Of course we did. Because sports — many sports, maybe all sports — were brilliant in 2013. I mean, did you see the end of Auburn-Alabama? As an adrenaline delivery system, Chris Davis’s 109-yard missed–field goal return was something more than great. It was irresistible. That big swerve to the left, where it seems like three Alabama players are going to pound into him; then the huge block to give him a yard of clear running room; then the moment when you realize Oh my God, he’s behind the whole Bama defense … he’s GAINING on them … he’s going to SCORE … Sports are such a perfect product because at their most elemental they’re not a product at all. It hits your nervous system at a point that precedes volition. It’s as unrealistic to expect us not to respond to, say, the insane first half of Louisville’s win over Michigan in the final of the NCAA men’s basketball tournament as it is to expect athletes not to cheat for competitive advantage or owners not to lie to make money. There’s a reason gladiators were a thing. Forget the NCAA’s botched investigation of Miami, announced back in January, or SI‘s controversial dive into Oklahoma State recruiting. You could know the losing team is going to be executed at the end of Auburn-Alabama and still feel a thrill at that last play.

Back in February, Europol, the criminal-intelligence division of the European Union, released the results of an investigation into match-fixing in soccer. The report identified 680 suspicious games, including both Champions League matches and World Cup qualifiers. International organized crime, the inference ran, had bitten big, toothy chunks out of the fundamental principle of organized competition — the idea that the games are decided on the field.2 I wrote about this at the time and argued, basically, that once fans lose trust in that idea, you don’t have a game in crisis. You don’t have a game at all.

Police in Singapore finally arrested Dan Tan, the alleged leader of the match-fixing ring, in September, though it’s unclear what long-term effect this will have on gambling fraud in sports.

Did anyone, anywhere, watch one second less soccer in 2013 because of this investigation? I didn’t. And I’m not really sorry I didn’t, because I got to see maybe 30 beautiful goals, caught a dozen amazing matches, and jumped out of my chair about 100 times. Of the major men’s sports leagues, only the NBA didn’t face a huge, structural-type scandal this year.3 But the leagues and the TV networks and the websites employing ambiguously self-critical sports-obsessive year-in-review writers felt stronger than ever. The most archetypally innocent sporting event on the planet, the Olympics, saw its 2014 edition overrun by stories of “unprecedented corruption,” contract fraud, cronyism, and outright theft, and that’s before you even get to the movement to boycott the event over Russia’s violent crackdown on gay rights.4 And yet when the games kick off in Sochi, we will tune in to NBC and probably feel good about it. Being thrilled will convince us to be inspired, even if we’re not sure we should be. Even if we’re sure we shouldn’t.

Basketball had some flickers and proto-scandals, but nothing quite like Major League Baseball suspending its 2011 NL MVP 65 games for PED use.

Ever the compliant symbol, the Olympic torch, currently in the midst of its pre-Sochi relay across Russia, recently lit one of its carriers on fire in Siberia; another carrier suffered a fatal heart attack while walking his 218-yard stretch.

I want to believe that the NFL will solve concussions, that we’ll reach a sane consensus on PEDs, that international pressure will transform the Qatari labor market into something less murderous, that my desire to believe these things won’t be swiftly rerouted into another way for some human locusts to graze on money. But as this great, terrible year rolled along, I found myself wondering whether, if none of these things happened, it would affect my sports fandom at all. And I don’t know the answer to that question.

In 2013, it turned out that you didn’t need innocence to sell sports. Innocence was a luxury your audience was prepared to supply on its own.