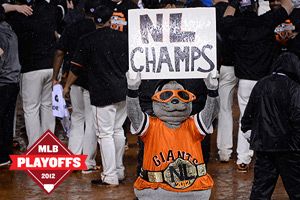 There were no late-game heroics in this one. There were no rally caps and no controversial calls at the plate. Time didn’t stop as a full-count ninth-inning pitch hung in the void between strikeout and grand slam, between going to the World Series and going home. There was no palpable tension last night in the air at AT&T Park. The score was 7-0 Giants after three innings of play against the St. Louis Cardinals, and 9-0 after eight.

Instead, there was rain. The weather had been threatening all day, like an umpire warning a feisty manager, but it wasn’t until the top of the ninth that it finally snapped. One minute we fans were enjoying a beautiful, big-clouded evening with the occasional passing mist, singing along to Brian McKnight’s silky performance of “God Bless America,” and the next we were totally soaked, our orange “Rally Rags” dripping, everyone scrambling to secure their prophylactic ponchos just a few minutes too late.

But rather than scatter for cover or use the conditions as an excuse to bounce a little bit early and beat traffic, everyone reveled. The harder it rained, the harder we cheered. For a few minutes AT&T Park felt like it was populated by a bunch of strapped-to-the-mast Lieutenant Dans on their way to that one really muddy Woodstock. The man next to me, who was listening to the radio feed on his headphones while watching the game, reported that if the grounds crew came onto the field with the tarps it’d be at least a 45-minute wait before they’d start play again. I secretly hoped that we’d be there all night.

Down on the field, with the Giants pitching to end the game in the top of the ninth, Giants second baseman Marco Scutaro was enjoying the suddenly ugly weather too. He spread his arms, gazed up into the rain and beyond, and like a little kid opened his mouth wide to catch some of the drops. Minutes later he would also, in more conventional fashion, catch the game’s final out. And shortly after that, with the rain still pouring down as field workers hastily assembled an awards podium on the field, Scutaro — who batted .500 in the seven-game series, recording 14 hits and scoring six runs — accepted the trophy as NLCS MVP.

Later, he talked about the one thing still on everyone’s minds.

“I spent four years with Oakland, and I don’t remember it ever raining,” he said.

In addition to those four years in Oakland, the 36-year-old Scutaro has had various cups of coffee with the Mets, Blue Jays, Red Sox, and Rockies during his middling career. He also passed through the Milwaukee Brewers farm system at one point, a stint that earned him a spot in a documentary about minor leaguers called A Player to Be Named Later. Last fall, he was part of Boston’s historic late-season collapse. He came to the Giants this summer in a trade with Colorado for infielder Charlie Culberson that drew little fanfare at the time, particularly compared to splashy moves by teams like the Dodgers, but he has turned out to be one of the most fruitful acquisitions in recent MLB history. His teammates have taken to calling him “Blockbuster.”

He became a human rallying cry for the Giants in Game 2, when Matt Holliday, trying to break up a double play, slid aggressively into him at second base. Last night, five games later, pitcher Matt Cain took the opportunity to remind Holliday that the incident had not been forgotten, bonking him on an 0-2 count. (This delighted a woman sitting in my section, who for the next several minutes kept saying, ostensibly in Cain’s voice, “I coulda struck you out, but I’m gonna bean you!!!” to anyone who would listen.) And so it was fitting last night when it was Holliday who popped up to second in the pouring rain and it was Scutaro who did the honors of ending the inning, the game, and the series.

Scutaro wasn’t the only recent Giants pickup to have had a big impact last night. Hunter Pence, the former Philadelphia Philly who rides to games on a scooter and looks like he just stumbled out of a Judd Apatow flick, had perhaps the biggest and strangest play of the night. With the bases loaded in the bottom of the third inning, nobody out, and starter Kyle Lohse pulled, Pence connected with a pitch from rookie reliever Joe Kelly and hit a searing ball that left the Cardinals fielders looking like they’d had their shoelaces tied together. Three runs scored for San Francisco on the play.

The reason for the bonkers trajectory? Pence’s bat had shattered upon impact, and the ball rolled along the shards of wood as if it were a puck on a hockey stick, making contact three different times.

It was fitting that one of the biggest at-bats of the series for the Giants would be such a wacky one. This has been an unlikely postseason for San Francisco, a team that trailed Cincinnati two games to love in the best-of-five divisional series and had also fallen behind 3-1 to St. Louis in the NLCS before taking the last three in a row. This makes them only the second team to earn wins in six straight elimination games (the 1985 Royals were the other). They’ve done so despite widespread hitting woes. They’ve benefited from the quiet and somewhat unexpected resurgence of Barry Zito. They’ve come alive when it counts, outscoring the Cardinals 20-1 over the last three games of the matchup. They’ve been on the brink of elimination again and again, and they haven’t gone anywhere. And last night, neither did their fans.

The Giants will have home-field advantage in the World Series, for which they owe awkward thanks to Melky Cabrera. (His MVP performance in the All-Star Game in July was followed just over a month later by his being busted for doping and bad web design.) They’ll play host to the Detroit Tigers, who have been sitting idle since dismantling the Yankees in a sweep last Thursday.

Detroit bears some similarity to the Giants team that won the World Series in 2010, with a dominant starting pitching rotation — in this case, one centered on hot shot Justin Verlander, who will be on the mound pitching against Zito in Wednesday’s Game 1. Drawing this series out to the full seven games could mean facing the ace up to three times, an unenviable challenge.

“I was telling a guy at the bar today about the way to beat Verlander … ” explained one guy in our section. It was the eighth inning, and the the vibe was one of anticipatory restraint, everyone’s knees knocking and minds wandering as if we were perched on the stairs in footie pajamas on Christmas morning while our parents brewed coffee. The monsoon had not yet begun.

” … you only have to beat him once,” the guy said. “Then you just sweep after that!” He laughed, but he seemed to almost believe it was possible. With this Giants team, it’s beginning to feel like everything is.

“Lights” by Journey came over the loudspeaker, as is the AT&T Park custom, and we all sang along. When the lights go down in the city / and the sun shines on the bay … The sun was no longer shining on the bay. The rain started falling. It was mildly uncomfortable but mostly satisfying, like being licked in the face by a happy-to-see-you St. Bernard. There was also no question that this sloppy, drenched field ringed by sloppy, drenched fans was the appropriate way to celebrate this particular team.

Some of the players ran a lap around the soggy edges of the field, high-fiving and skipping; others wandered around the infield in a daze, hugging at random. Pablo Sandoval broke out a small Venezuelan flag and proudly held it up to TV crews struggling to not get their camera cords stuck in the mud. Just outside the entrance to the park, a dance party was getting under way, presided over by a guy in a black-and-orange mau5head. Fireworks went off over the bay. Just like everyone else in the building, they weren’t about to be shut down by a little bit of rain.