Writing about pop culture inevitably influences how you process pop culture. You wind up thinking in terms of story lines, and how otherwise unrelated phenomena fit into those story lines. And often those story lines shape opinions. For instance, I think one reason why critics seem to like Yeezus more than the general public does1 is that it slots easily into a number of critic-friendly narratives, whether it’s the one about the “provocative and challenging loner genius pushing an art form forward” or the one about “how an album can still form the ‘nucleus’ of culture.” As good as Yeezus is musically, the record’s primary attribute (among critics, anyway) is that it’s interesting fodder to think (and then write) about.

Yeezus had the worst first-week sales of any Kanye West record, which could be blamed on the early “leak” but is probably due more to a lack of any obvious hit singles.

The overarching (some might say overbearing) narrative in all of pop culture concerns how art is catalogued and ranked. As a writer and fan, I wish I could say I’m above caring about year-end lists. But while there’s a lot that annoys me about this annual practice,2 I can’t stop myself from comparing everything I hear and see against each other and plugging those things into a carefully curated list. Worse, I care just as much (if not more) about lists over which I have no direct control. List-making is an inherently trivial exercise, but it’s undeniably impactful — particularly for the legions of artists who aren’t catalogued and ranked. Lists construct an orderly reality out of chaos, where the haves are “important” and the have-nots conveniently no longer exist.

As I wrote in my year-end music piece in 2012, I’m not crazy about calling my list the “best” music of the year. There’s way too much music released in a given year for me to feel confident about using the b-word. I prefer “favorite out of the stuff I was able to hear,” because it’s more accurate.

Instead of exercising greater self-control over my list-making issues, I’m doing the opposite: This year, I’m not going to wait until December to be unhappy about the inadequacy of year-end best-album rundowns. There might be a whole half-year between 2014 and us, but I’m already thinking about which records will be the consensus picks for 2013’s most critically acclaimed music. In fact, I think I have a pretty good guess of what the top 20 will be:

That aside, I’m confident that my picks will be at least 75 percent correct. This isn’t about guessing whether albums I haven’t heard yet are great; it’s about anticipating which albums will attract a plurality of critical supporters. While that of course hinges on the musical quality of each record, it’s also greatly influenced by whether the album fits into a story line that critics favor. And that, actually, isn’t so difficult to predict.

Let’s begin with the 10 albums on the list that have already come out. I picked them because they rank among the year’s best-reviewed records (as we’ll see below), and also because they’re well known and palatable enough to garner a wide base of support. So, even though Deafheaven’s Sunbather (one of my three or four favorite albums of 2013 so far) currently has a Metacritic score of 95, which is higher than any record on this list, I didn’t include it because a euphoric New Agey black metal record likely won’t have general-interest appeal among music scribes.

Here’s my nonscientific methodology: I took the Metacritic score for each record and added it to the scores from Rolling Stone, Spin, and Pitchfork. (For Rolling Stone, I converted stars to a numerical score.) In essence, I counted these publications twice, which I’d argue is appropriate since these are the reviews that other critics pay the most attention to.3 Whether a record is understood to be “good” or “bad” is often informed by these publications; a divergent opinion to the party line is commonly marginalized as “contrarian.” Tellingly, there’s little disagreement between Rolling Stone, Spin, and Pitchfork about the albums on this list:

Full disclosure: I write reviews for Pitchfork, and I’ve been a contributor to Rolling Stone.

Think of this list as the Jessica Biel to the first list’s Justin Timberlake — nearly every entry mirrors a record from the first half of the year. D’Angelo is the reclusive Kevin Shields figure working on the follow-up to Voodoo, the Loveless of modern soul. Arcade Fire, like Vampire Weekend, is a bulletproof legacy act for rock fans under 30 that’s due to make a “grown-up” record; U2, like Bowie, is the bulletproof legacy act for rock fans over 40 that’s due to make its “mortality” record. M.I.A. is the Daft Punk–like maverick set back by an abrasive third record, but whose influence on current pop trends has positioned her for a critical and commercial renaissance. Janelle Monáe is the innovative oddball who appeals to people who don’t normally listen to her genre — she’s the Queens of the Stone Age of R&B. Jay-Z and Beyoncé are poised to make their own versions of Timberlake’s proudly opulent 20/20 Experience. The Weeknd (like Vile) sounds like classic singer-songwriter fare to indie fans and freeze-dried molasses to the indie-averse; Tune-Yards (like the Knife) toes the line between exciting artiness and plain old irritating noise. This leaves Drake: the lonely, paranoid, and sex-obsessed Kanye for critics to wring their hands over in the back half of ’13.

Obviously I can’t guarantee this is how things will play out — it’s entirely possible that somebody will come out of nowhere in the next few months and make the album of the year. But I have little doubt that this is how these albums will be talked about, at least initially. There are thousands of records released every year, but only about a dozen different conversations. The subject matter changes constantly, but the words mostly stay in the same place. 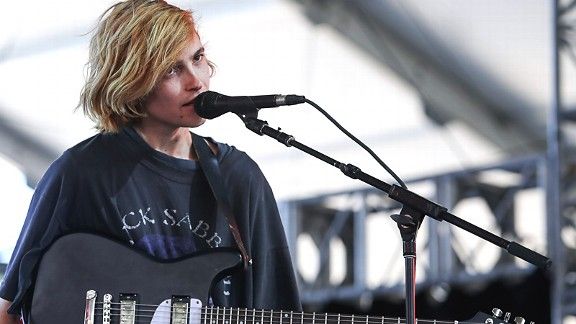 Last week, a highly entertaining and deeply ridiculous interview with Zachary Cole Smith of the band DIIV appeared on Pitchfork. If you’ve never heard of DIIV — and you probably haven’t — the story serves as an unintentionally hilarious primer.4 Smith basically comes off like a hipster-doofus Nigel Tufnel — conversation topics include Elliott Smith and Royal Trux, Smith’s supposedly “huge problem” with drugs, and how he has the same Saint Laurent haircut as Ariel Pink, Christopher Owens of the band Girls, and Courtney Love. The best part of the interview occurs when Pitchfork writer and Grantland contributor Ian Cohen asks about Smith’s preoccupation with Kurt Cobain and how it relates to his current relationship with indie-pop singer Sky Ferreira.

I put Oshin at no. 13 on my 2012 list. It’s a really good record, though Smith has now made me feel a little silly for believing that.

“He was a spirit guide in the beginning,” Smith says. “I knew what all the fame would feel like already because I read about it in his journals. And I saw the angry letters that he would write to Lynn [Hirschberg], who wrote a shitty article [in Vanity Fair] about Courtney Love — there’s a copy of the fax he handwrote to her saying that he’s going to kill her. So I had a sense of what it was like to be a couple who has exposure. But again: Kurt is completely different. To be told that you’re the voice of your generation is such an incredible amount of pressure, and I haven’t faced that. Maybe by the time our third record rolls around, I will.”

My immediate thought after reading this was that Smith (like practically everyone else who makes or follows pop music) has no way to gauge how truly “big” anything is anymore. The collapse of the record industry and the subsequent glut of music festivals and never-ending tours have created a perception vacuum that’s been filled with media coverage; story lines are now the only currency with any (perceived) value for measuring popularity. Bigness used to be felt by the public; now it’s dictated.

This shift from “actual” to “fabricated” worth has had a corrosive effect on our collective understanding of culture. I was ready to write off the lead singer of a moderately popular rock band likening himself to Cobain — and citing him as a mentor for understanding his (nonexistent) fame — as patently delusional in a way that no longer seems delusional. Many of us reside inside personalized pop culture bubbles that we somehow believe represent the whole world. Smith was just more self-important about his bubble.

But after thinking about it a little deeper, I realized that Smith might be a lot savvier than I gave him credit for. When I played Oshin for the first time, I had no idea that DIIV was a Nirvana reference. (DIIV is named after the Nirvana B-side “Dive,” and Smith somewhat resembles Cobain physically.) The record’s appealingly melodic, reverb-heavy guitar pop didn’t make me think of Kurt Cobain at all; it made me think of the appealingly melodic, reverb-heavy guitar-pop band Real Estate. I find it hard to believe that anyone would compare DIIV to Nirvana based purely on the music. But after this interview, it’s an almost certainty that Incesticide references will be appearing in reviews for DIIV’s upcoming album. The next time Smith does something remotely controversial, it will probably prompt speculation over whether this “dark” and “angsty” individual is going down the path of the Big C. If DIIV has any success after this, Smith’s “voice of a generation” comments will seem prescient, not moronic. DIIV is comparable to Nirvana because Smith said so; he invented his own story line. Whether Smith turns into a Kurt/Kanye-like loner-genius figure remains to be seen, but he’s done all he can to push critics into thinking he might be, even before they’ve heard the record. Talk is cheap, but it’s still worth more than most albums these days.