If the first three games of the NBA season are any indication, Amar’e Stoudemire is on his way to one of his worst seasons in a very long time. He’s averaging just 17.3 points per game with a PER of 15.48, according to John Hollinger, and his true shooting percentage of just 51.2, down from 56.5 percent last season. Most teams would be pleased with that production from their power forward, but the Knicks rely on Stoudemire and Carmelo Anthony to score most of the team’s points, and right now Stoudemire’s production hasn’t been enough to make the Knicks a real threat to Miami and Chicago in the Eastern Conference.

That said, Stoudemire’s numbers aren’t half as troublesome as the fact that he seems to be floating further and further from the rim this season. Through three games, let’s look at Stoudemire’s shot distribution by distance so far this year compared to last year: 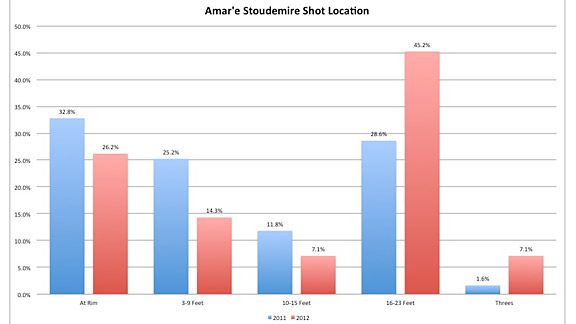 Stoudemire is taking fewer shots at the rim, fewer shots from three to nine feet, and fewer shots from 10 to 15 feet this season. Instead, he’s attempting a large number of “long 2s” — shots between 16 and 23 feet. He’s shooting 63.6 percent at the rim through his first three games, and 26 percent on long 2s.

It’s easy to look at these numbers and shrug them off. It’s a small sample size. Wait until he gets a real point guard to play with. But the tape shows a trend that’s difficult to ignore. The first observation that jumped out at me is how moving to power forward has hurt Stoudemire on offense, especially on isolation plays. Stoudemire went from playing 49 percent of the Knicks’ center minutes last year to playing 16 percent of them this season, according to 82games.com. With another big — newly acquired Tyson Chandler, most of the time — on the floor, the lane is more crowded than before. This has caused Stoudemire to drive less and settle for jumpers more often when he isolates against his defender. Last season, he shot jumpers on 32.8 percent of his isolations; this year, he’s shooting them 38.1 percent of time. The reason, once again, is spacing. 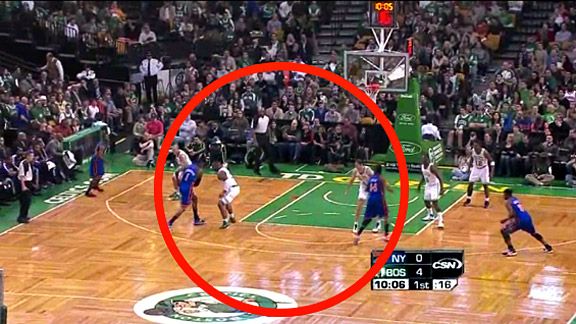 Here’s one recent possession with Stoudemire at power forward and Chandler at center. Chandler plays like a true center in that he doesn’t camp on the perimeter and take jumpers. He plays around the rim, looking for drop-off and lob passes, as well as putback opportunities. Since Chandler sticks around the lane on offense, his defender will be there, too. In this case, Josh McRoberts is guarding Chandler, and he has both feet in the paint, ready to help if Stoudemire drives. Stoudemire sees that he has no lane and settles for a jumper. The result ain’t pretty. 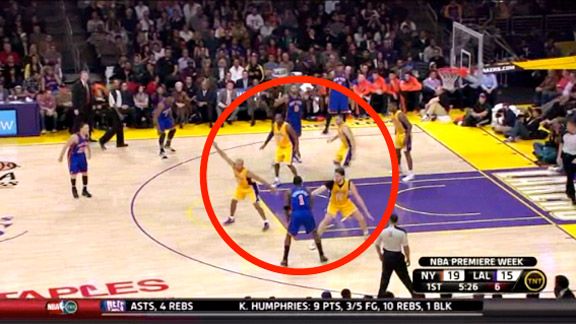 Things were different last year. With Stoudemire at center, there was no other big man who needed to be in or around the paint. This opened up the middle for Stoudemire. On this possession, the Knicks’ power forward and his defender are at the top of the key, which means there is no help defender in the paint. Stoudemire reads this, attacks the lane, and finishes at the rim.

Video from this season also shows that the Knicks could be using him better. In the three games Stoudemire has played, he has been involved in just one pick and roll as the screener. It’s almost impossible to comprehend why a player who made a living as Steve Nash’s pick-and-roll partner in Phoenix and who found similar ball-screen chemistry with Raymond Felton last year would be involved in just one pick and roll so far this season. For Stoudemire, the play is particularly effective because slipping and rolling after ball screens gets him moving to the rim, where he’s all but unstoppable.

Along with David Lee and David West, Stoudemire is one of the NBA’s quickest rollers to the rim. When Stoudemire sets screens, he gets to the paint and beats help defenders to the basket more times than not. Stoudemire rolls so well after screens that the play should be effective despite the Knicks’ current lackluster point guard trio of Toney Douglas, Jeremy Lin, and Iman Shumpert. In fact, more ball screens with Stoudemire should help those guards by forcing defenders to focus on stopping the roll and allowing the ball handlers to come off screens in space.

If the Knicks want Stoudemire to play closer to the basket, they need to make some changes. For starters, they should give Stoudemire the backup center minutes while Chandler is on the bench. One reason why Stoudemire posted a PER of 22.79 and scored 25.3 points per game last season is that he often matched up against centers who were slower and less athletic than him. Last year, many analysts focused on how the Knicks’ lack of a true center made them a weak defensive team. Stoudemire’s struggles so far this season are a reminder that the Knicks also benefited by playing small ball.

That said, the Knicks needed to get better on defense, and Stoudemire and Chandler will be playing together for a majority of their minutes. So far, the Knicks offense has looked disorganized and random, with players just floating around. Under these circumstances, Chandler naturally gravitates toward the rim, which clogs the lane and forces Stoudemire to rely on jumpers. To clear some space, the Knicks need to get more strategic about where Chandler and Stoudemire position themselves on offense. For example, when they want to isolate or post Stoudemire, they could position Chandler in the opposite corner, far enough away that his defender will have a long way to travel to help against Stoudemire’s move. If that defender decides to help, Stoudemire will have a simple dump-off to a cutting Chandler. If he sticks with Chandler, Stoudemire has the space to take his man.

Another strategy the Knicks could use is to run a pick and roll with Chandler and ball handler on the strong side, then quickly reverse the ball to Stoudemire in the weak-side post. This would get Stoudemire the ball close to the basket while keeping the other defenders occupied with the ball screen.

One final offensive scheme that might help the Knicks would be to run pick and rolls with Anthony and Stoudemire. Other teams with pairs of dynamic scorers, like LeBron James and Dwyane Wade in Miami or Kevin Durant and Russell Westbrook in Oklahoma City, have tried using their stars together in ball-screen situations, and have been very successful. 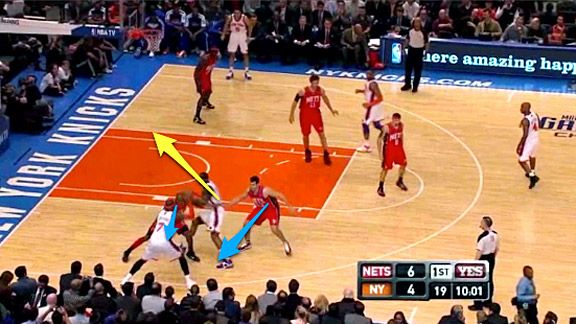 Here, Stoudemire sets a screen for Anthony on the wing. 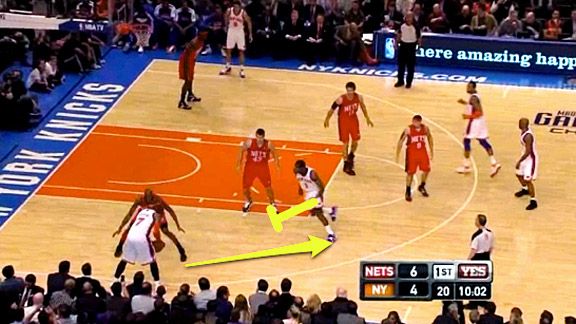 No defense would allow Anthony to come off a screen untouched, so Kris Humphries, Stoudemire’s defender, hedges hard at Anthony and traps him before he starts his dribble. This is a perfect opportunity to slip the screen, and Stoudemire, being the fantastic roll man that he is, reads it perfectly and slips to the rim with space. The result is an easy finish.

The fact that the Knicks haven’t been running this play at least five times a game is mind-blowing. Anthony isn’t the most willing passer, but putting him in situations that create wide-open passing lanes and easy scoring opportunities will invite him to share the ball. If teams focus on stopping Stoudemire’s roll, Anthony can look for his shot off the screen.

In all likelihood, Stoudemire won’t be shooting almost half his shoots from 16 to 23 feet for the entire season. At least Knicks fans should hope he won’t. Mike D’Antoni and the Knicks’ coaching staff, however, would be wise to tweak their offense in ways that will make it easier for Stoudemire to get into the lane, where he’s most effective. Even with Chandler guarding the rim, the Knicks can’t rely on defense to win games this season. That means they need Stoudemire’s offense as much as ever, and if they don’t find ways to get him going, the Knicks won’t make their much-hyped jump into the league’s elite.

Previously by Sebastian Pruiti:
NBA Rookie Rankings, Week 1
Cuban & Lamar or Tyson & Melo?
James Harden’s Path to NBA Stardom
How Chris Paul will change the Clippers’ offense
A breakdown of Eric Gordon’s path to superstardom
Chris Paul and the Lakers: What could have been
How John Wall can become a Star in his Second NBA season