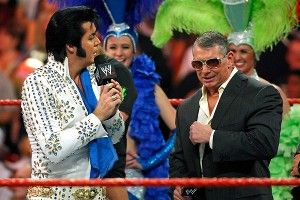 The last episode of WWE’s Monday-night Raw before a pay-per-view is called a “go-home show,” a night used to put the finishing touches on feuds that will come to a head at the big event. It’s more about hype than story. This past Monday, the “go-home show” before Sunday’s Money in the Bank PPV, WWE flipped the script by answering a question that had been confounding serious wrestling fans everywhere: They revealed the identity of the anonymous Raw general manager who ruled the show with a wry iron fist between June 2010 and July 2011.

It had been a year since we’d seen the anonymous GM, and the suspense hadn’t exactly been building. It was a pretty silly idea to begin with, a means to draw cheap jeers at announcer Michael Cole, who was obliged to climb atop a pedestal and read the GM’s directives, which were sent via e-mail to a ringside laptop. By Monday, the gag had become mostly an in-joke among wrestling fans, an abandoned plotline that was never resolved. But in preface to the 1,000th episode of Raw (which is coming up in a couple weeks), GMs from over the years have been returning to run the show on special one-off nights, and Monday they brought back the much-maligned Anonymous One. Comedy wrestler Santino played the role of Sherlock Holmes (literally — he wore a costume and everything) and eventually uncovered who the GM had been all along.

It was Hornswoggle. Yes, Hornswoggle, the wrestling leprechaun who lives beneath the ring and who only gained the ability to speak last Christmas as a magical gift from Santa Claus.

It was a laughable ending to an all-but-forgotten cliffhanger. Of course, pro wrestling history is full of wrongheaded story lines and abandoned angles. But there’s a special place in the wrestling fan’s heart for the most outrageously anticlimactic payoffs. In honor of the anonymous GM, let’s remember professional wrestling’s most ridiculous gimmicks and their endings.

To this day, you can find Yahoo! Answers pages with questions like “Did Vince really die on TV?”

He was named a steroid user when 10 WWE stars were reported as customers of a shady online pharmacy.

Oddly, if memory serves, in both the illegitimate-son story line and the “Who ran over Austin?” story line, the mystery man was identified as having blond hair before he was revealed.

To be perfectly fair to WWE, they do seem aware of this ridiculousness, and they seem to take some joy in inflicting it upon their fans. Wrestling fans — myself included — love these historical outliers in an ironic way. As far as Monday’s Hornswoggle reveal goes, the writers were pretty much playing it for laughs. Michael Cole, who in the past would notoriously read the “e-mails” off a sheet of paper atop his laptop keyboard, was doing it more ostentatiously than ever, and Hornswoggle’s inclusion seemed like an almost deliberate reference to the McMahon’s-son arc. It was a playful nod to the painful lack of continuity in the GM story line, a simultaneous wink and middle finger to the hardcore fans.

In most of these flops, though, the uniting factor has been uncertainty. When a story evolves and the original ending gets scrapped — or if there is no ending to begin with — there are basically three backup plans: (1) Substitute in something lesser and accept the wrath of the fans, (2) play it for comedy, or (3) insert Vince McMahon.4 The big problem is that fans’ expectations in these situations often grow beyond the writers’ ability to deliver a satisfying ending. Almost no wrestler would have been a big-enough surprise to warrant the type of buildup that preceded the Black Scorpion and Gobbledy Gooker reveals. Wrestling is very good at un-hyped “holy shit” moments: When a wrestler appears unannounced, or a conventional match takes a surprising turn. But it’s often terrible at the slow build. Maybe the lesson is that wrestling just isn’t built for that kind of storytelling.

Don’t get me wrong — as bad as some of these finishes are, McMahon is at least a functional solution to any story line problem when all else fails. And he’s at least a few degrees better than Flair as The Black Scorpion.

The lesson for fans, though, is simple: If a character is offscreen, masked, or otherwise obscured, don’t get your hopes up.

At least we can look forward to Money in the Bank this Sunday. The eponymous briefcase matches in the event offer exactly the kind of storytelling that wrestling executes well: Some number of guys5 fight it out until one of them climbs a ladder and grabs a briefcase suspended above the ring. That man wins, and he gets a title shot at any point of his choosing over the next year. Almost always, that means he waits until the champ is beaten down after a big match, and then he runs to the ring and beats him. Edge, the first winner, pinned John Cena after he’d won a grueling Elimination Chamber match in 2006. Two years later, CM Punk beat Edge after a match with Batista, and in 2009 he pulled the same stunt against Jeff Hardy, who had just beaten Edge. Jack Swagger, Jane, and The Miz felled Chris Jericho, Randy Orton, and Rey Mysterio, respectively, in the same fashion. Just last year, Daniel Bryan beat The Big Show after he had won the title against Mark Henry.

It’s usually eight, but it can be any number, theoretically. They’ve gone as high as 10. This year, one match has eight and the other has four.

Outside of winning the Royal Rumble, there’s no better onscreen projection of WWE choosing a path and christening a wrestler for future success. Whoever wins on Sunday night will be champion someday — it’s more or less a given.6 This year’s event has two MITB matches: One featuring all former champs — John Cena, Big Show, Kane, and Chris Jericho — and one featuring mid-carders and up-and-comers: Christian, Cody Rhodes, Dolph Ziggler, Sin Cara, Tyson Kidd, Santino Marella, Tensai, and Damien Sandow. Both setups are intriguing — the former because it will influence top-level feuds for the foreseeable future, and the latter because it will anoint an heir apparent.

The one wrestler who won an MITB match but didn’t end up as champ was the aforementioned (and ill-fated) Ken Kennedy, who got hurt after winning and so lost his briefcase in a match against Edge.

The two former MITB winners who have ensconced themselves atop the WWE hierarchy of late are CM Punk and Daniel Bryan. Those two will face off in the main event7 with their mutual ex AJ as a special referee. This story line has been incredibly compelling so far, at least up through last week, when AJ threatened to throw herself through a table — a sort of mock-suicide — and instead tossed both of her erstwhile love interests through it. In Monday night’s opening sequence, AJ incongruously proposed marriage to Punk, then she was proposed to by Bryan, and the whole thing threatened to devolve into something that would find a comfortable home on the above list. They have plenty of space to salvage this, of course, but that’s the thing about expectations — once something gets good, sometimes the only way out is disappointment.

Although the match may not go on last. One gets the feeling that Sunday’s sequencing will depend on in-card storytelling. Maybe the winner will cash in the briefcase right after the Punk-Bryan match, or perhaps Punk will lose the belt to Bryan in the semi-main, and then he’ll enter himself in the former-champs MITB match.

Don’t get me wrong: I have high hopes for Sunday. But if one of the Money in the Bank matches ends with Vince McMahon holding the briefcase, or if AJ ends up making out with Hornswoggle — or if The Big Show gives birth to a plastic hand — you’ll know what happened.