There isn’t even officially a name for it. Frankly, it’s too ghastly to have a name. For the purposes of this column, we’ll call it the Horrible Sound.

You only hear the Horrible Sound during especially big games, and only if something unthinkable happens to a good player on the home team. If you think of noise being measured from 1 to 10, an especially big game carries a particular buzz that never seems to fade. It’s like the last few seconds before a concert when they shut the lights out, only the band hasn’t emerged yet. That’s just how it sounds for two and a half hours. If something unthinkable happens to one of the home players, that ongoing, this-game-is-bigger-than-all-of-us buzz doesn’t screech to a stop like a record being halted. Rather, it fades over the course of a few seconds — like someone is slowly turning down a knob that controls the crowd volume from 8 to 7 to 6 … until finally, you’re at 1 and everyone in the building is standing in shock. It’s awful. It’s one of the worst experiences you can have at a sporting event. 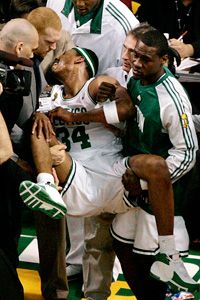 But that’s not even the Horrible Sound. That’s just the chain of events needed to get there. During Game 1 of the NBA Finals on Thursday night, when Paul Pierce was clutching his right leg in agony, the Boston crowd was rocking minus-4 on the volume knob within a few seconds. He slumped into a heap a few feet in front of the Celtics’ bench, with teammates and coaches quickly surrounding him so the fans couldn’t see anything. Two agonizing minutes passed. If you placed thought balloons over everyone’s heads in the Whatever The Hell The Garden Is Called, each one would have looked the same:

“I knew this Finals was too good to be true.”

See, fans are selfish that way. Pierce might have blown out a knee or broken a leg, but we were thinking about our improbable, once-in-a-generation Lakers-Celtics Finals going down the tubes. Watching from 40 feet away with my father, Dad just kept muttering, “no … no … no … no …” We all felt that way. That’s what made it so painful when it seemed like Pierce was finally standing up (volume going back up to 2, then 3, then 4 …), only we realized he wasn’t actually standing but being carried off the court by two teammates. Brian Scalabrine had one of his legs, Tony Allen had the other. Pierce’s arms were draped around their necks. They hurriedly schlepped him off like a wounded soldier on a battlefield.

That’s when the Horrible Sound happened. It’s like a groan crossed with a gasp crossed with an exhale (only if 18,000 people are making it at the same time), quickly followed by somebody pressing “MUTE” on the entire crowd. I’m telling you, it’s the worst noise in sports — maybe a one-second blip followed by dead silence that conveys three emotions and only three: