Those are three words you never expect to say as a Patriots fan. Not during the Belichick-Brady Era, anyway. But after a truly remarkable AFC Championship Game – Colts 38, Pats 34 – those were the only three words I kept saying. We had it when we were driving inside the Colts’ 20 with a 21-3 lead. We had it when we kicked the go-ahead field goal with five minutes left. We had it when we stopped Manning three-and-out. We had it on our own 40 with 3:30 to play, needing only a first down to finish the game.

This isn’t sour grapes, I promise. (No, really. I promise.) The Colts deserved to win one of the greatest NFL playoff games in recent memory. They made up an 18-point lead in about 20 seconds. They withstood every haymaker and kept throwing punches right back. They came through in the clutch and so did their much-maligned QB. And the Patriots did just enough to blow the game – they couldn’t run the ball in the second half and the defense wilted as the game went along, worn down from last week’s slugfest in San Diego, the flu and a glaring lack of healthy bodies. By the time the fourth quarter rolled around, cramped pass rushers were getting their legs massaged on the bench, random special teamers were playing key defensive positions and I found myself actually saying things out loud like, “My God, Artrell Hawkins is out, what do we do now???” 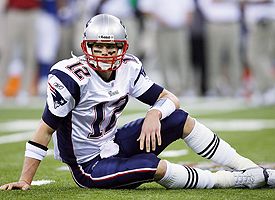 Watching the game in my office and trying to determine how to stop the Colts (who had rolled off four straight scoring drives heading into the fourth quarter), I was so desperate for a momentum change that I hijacked my daughter and brought her in front of the TV for good luck. And you know what? It worked! Indy went three-and-out and Manning banged his thumb on somebody’s helmet; CBS even showed a replay of Manning telling backup quarterback Jim Sorgi, “Be ready.” Instantly, I remembered Wilt Chamberlain’s famous knee injury in Game 7 of the ’69 Finals, when Wilt took himself out in the fourth quarter and the Celtics ended up winning their 11th (and last) title of the Russell Era. This was like Wilt, The Sequel. Manning had an out, the Pats would win, and we’d spend the next two weeks making jokes about his thumb. Seemed like a perfect ending to me.

Even when Manning returned and completed a 50-yard wobbler to Dallas Clark to set up a game-tying field goal (exit: my daughter), he still didn’t seem quite right. The Pats responded with a quick drive and go-ahead field goal (in my notebook, I wrote down, “Gostkowski: WATERMELON BALLS”), followed by Manning struggling through a three-and-out series and looking positively A-Rodian. Now the Colts needed the Patriots to self-combust somehow in the final four minutes, even though they owned crunch time in the past (as CBS banged home with a “Bill Belichick is 8-0 in playoff games decided by 7 points or less” graphic right before the drive started). Fortunately for the Colts, all hell has broken loose in 2007 – already, Chris Kattan is engaged to a supermodel, Eddie Murphy might win an Oscar, Steve Nash is headed for a third straight MVP award and Boise State beat Oklahoma in a January 1st bowl game. So really, anything’s possible at this point.

How did the most clutch team of the decade blow the game? They kicked things off with a too-many-men-in-the-huddle penalty to make it first-and-15, followed by two short passes to set up a third-and-4 near midfield with 2:30 left. Naturally, this was the time for Brady to find Troy Brown for a five-yard out for the 10 millionth time … only Brown ran to the wrong spot, Bob Sanders nearly picked the pass off and Brady walked off the field yelling at Brown. (Note: I’m going to have this entire sequence digitally removed from my brain next week.) That was quickly followed by Todd Sauerbrun punting it into the end zone (so much for the Little Things, folks), then Manning jogging onto the field for a career-defining two-minute drive as Jim Nantz made one of those schmaltzy, “You get the feeling so many lives and careers could be affected in the next two minutes and 17 seconds” comments before nearly giving himself diabetes.

At this point, I was prepared for anything: An interception, a fumble, a long touchdown, an Elway-like drive, Manning’s head exploding … you name it. But Manning was ready. Bullet pass to Wayne for a first down. Thirty-two yard strike to Fletcher for another first down. Another pass to Wayne for a first down (which he nearly fumbled away — a goofy play that didn’t even rank among the top-10 goofiest plays in this game), punctuated by a horsecrap roughing-the-passer call that CBS was too embarrassed to even replay. In about 10 seconds, the Colts were on the New England 12 and you could tell the Pats had nothing left. (Note: You know your defense is done when you’re rooting for the other team to score so you can get the ball back faster.) Running on fumes of their fumes, the Patriots’ defense allowed the last 12 yards on runs and failed to touch Joseph Addai on the winning score — with backup linebacker Eric Alexander failing to plug the hole and backup safety James Sanders whiffing on Addai completely — a far cry from the memorable 2003 victory in the RCA Dome when Willie McGinest stoned Edge James on fourth-and-goal. 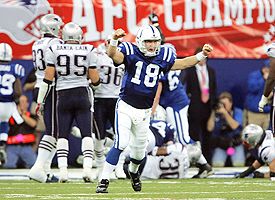 (These are the moments when you remember, “Hey, it’s really, really, REALLY hard to get a dynasty going.” You need to keep replenishing the talent base, you need to replace character guys with more character guys, you need your core stars to stay healthy, and you need a ton of luck in close games. For further explanation, look at the Yankees during 2001-2006. That’s why Belichick said about eight words to a quivering Solomon Wilcots after last night’s game. He knows. You only get back so many times.)

That was that. After Brady got picked on a desperation drive to end the game, a slightly stunned Manning kneeled to end the game and kick off a massive celebration capped by the blood-curdling sight of Vinatieri and Manning hugging (around the year 2036, I’ll recover from that one). I spent the next 20 minutes making excuses, shaking my head and passing blame around. On the phone, my father was even more distraught, bringing up the offensive pass interference call on Brown – leading 21-3 and driving for another score, when they whistled Brown for the same exact pick play that New Orleans used to spring Reggie Bush for an 86-yard TD earlier in the day (you know, the same pick play that every team uses and never, ever, EVER gets called) – at least 300 times during our conversation, as well as the aforementioned bogus roughing-the-passer call that moved Indy from the 27 to the 12 and apparently isn’t allowed to be mentioned ever again. Eventually, we realized that we sounded like the Rams fans in Super Bowl XXXVI, or the Eagles fans in Super Bowl XXXIX, or the Chargers fans last week … nobody cares if you could have won the game, just whether you did.

Besides, Sunday night was about Manning over everyone else. A lightning rod over the years for sports radio hosts, football experts, talking heads and snarky columnists like myself, Manning seemed profoundly snakebitten after last year’s Steelers loss and utterly incapable of carrying his team when it mattered. He had become the A-Rod or C-Webb of his sport, a mortal lock to melt down in every big game. Hell, any football fan has probably attempted an off-the-cuff imitation of the Manning Face at some point. Even last week against the Ravens, Manning was throwing the ball up for grabs and dancing in the pocket like a contestant on “You’re the One That I Want.” His body language never seemed right, not even during the first half last night, after the Pats scored on a fumble recovery by their left guard and CBS showed a great replay of Manning reacting like a little kid who just had his Big Wheel taken away. Nothing about the guy inspired real confidence. He needed a borderline miracle to turn things around.

As strange as this sounds, I headed into halftime believing that the 21-6 score removed much of the pressure off him. There were eerie parallels to the Dave Roberts Game in that the Colts (A) were handicapped by their collective history (much like the Red Sox heading into that 2004 ALCS), (B) were battling their long-time nemesis who always owned them (much like the Yankees), and (C) needed to hit rock-bottom to set up the whole “miracle comeback that makes everyone forget that this team was snakebitten in the first place” thing (like the Red Sox being three outs away from a sweep). Nothing’s scarier than a home team playing with house money in front of a desperate crowd dying for a reason to jump back into the game. 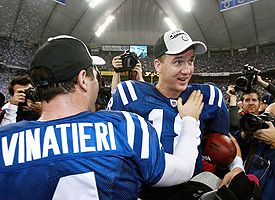 Still, Manning needed to come through. He had four legitimate outs last night — after the brutal Samuel interception made it 21-3, after Wayne’s pass interference got overturned right before the half, after the thumb injury, and after the three-and-out with four minutes left — and didn’t take any of them. For once, he got better when it mattered, even if there was never a moment when anyone thought, “Wow, he’s cutting the Pats up with a SCALPEL right now.” Unlike the famous QBs from the ’80s and ’90s (Marino, Elway, Montana, Favre) or even Brady right now, Manning never gives you that feeling that he stepped right off the set of a sports movie to save the day. He’s exceedingly human, dorky and endearing, the kind of guy who might have a giant pimple pulsating on his forehead during a big game. Even as Brady was trying to save the game in the last minute, Manning remained sitting on his own bench, his head bowed, staring at the ground and terrified to look up. Almost like he was sitting in a hospital waiting room awaiting the results of a blood test. He certainly didn’t seem like your typical football hero.

And if Brady had pulled off a miracle in those final 54 seconds, we wouldn’t be discussing Manning for the next two weeks. But that’s the crazy thing about sports: One moment can alter the entire history of somebody’s career. Ask Tony Romo. Ask Earnest Byner. Ask Kevin Dyson. Hell, poor Dan Marino sits there on the CBS studio show bristling every time Boomer Esiason compares him to Manning, with the implication being, “If Manning’s not lucky, he could end up with an unfulfilled career just like Dan the Loser over here.” Sure, you need talent over everything else, but you also need timing and luck, and you need to come through when it counts. Until last night, just like Marino, Manning couldn’t get all four things working at the same time.

Now he’s one win away from putting that “can’t win the big one” label to rest and getting to enter the John Elway Zone – loosely translated to mean, “All right, here’s my ring, now you guys can all shut the hell up and leave me alone.” And if he ends up beating the Bears and winning a Super Bowl, 30 years from now, nobody will remember that the Patriots needed only to convert third-and-4 to win the 2006-7 AFC Championship Game. They’ll remember that Peyton Manning came back from 18 down, toppled his arch-rival and prevailed in one of the greatest playoff games in NFL history.

(And some day, I might even believe that I just wrote that sentence.)