It probably seemed so safe at the time. It was late April, one of those drowsy Tuscaloosa afternoons when the light filtering down through the trees makes everything seem like a dream. Nick Saban had only meant to sit in the recliner for a minute, just long enough to sort through some papers that had slipped loose from the “Aa-Aj” sector of his master recruiting corkboard. Lousy pushpins, he was thinking. Why can’t someone design them to hold more than 18 pages? It was incidents like this — a loose pin here, a broken staple there, seemingly minor but with implications that could scarcely be calculated by the human intellect — that kept you from signing that three-star defensive back who could maybe redshirt his way onto your practice squad. You had to control your mistakes, keep chaos firmly in hand. Otherwise the kid would strut out to his crappy little folding table on signing day and you’d think you had him sewn up and then he’d bust out a Narnia State cap and the leopard sitting on his left shoulder would offer you an apple and oh my goodness what was this feeling of warmth and contentment …

Why, he’d fallen asleep! He, Nick Saban! It had only been for 15 minutes, he confirmed angrily, unpocketing his tertiary backup stopwatch. But it happened! He hadn’t slept since — well, since September, when he’d given himself permission to take a short nap as a reward for learning the entire Latvian language in order to send an exploratory text to a 14-year-old free-safety prospect named Jazeps. Good kid. A little slow, maybe, but a natural tackler. But that wasn’t the point! The point was he’d lost 15 minutes, a whole quarter-hour that he could have used signing “from” cards on single mom–targeted gift baskets. Well, he reflected, he must have been tired. And now, at least, he wouldn’t have to sleep again till 2014. Perhaps ever. Perhaps he could finally forget the word “sleep,” in English as well as Latvian, and make use of every football hour in the football day for football. After all, what could you do when tragedy struck but suck your teeth, mean up your eyeballs, and move on?

And that, I think, is how Saban and his Alabama Crimson Tide managed to lose the funniest football game I have ever seen to Bob Stoops, a coach so diminished in recent years that his own nickname was often spotted making out with irony in public. On Thursday night, Big Game Bob hurled the dice from basically the first time no. 11 Oklahoma touched the ball in this Sugar Bowl matchup to the last, and Saban, infinitesimally better rested but underprepared by the length of one accidental nap, was never able to make up the cumulative ground he’d lost by not being diamond-saber focused on that fatal 4 p.m. in April.

Stoops, though — can we give the man a pirate ship? Oklahoma’s plan to stop the no. 3 Crimson Tide was so DNGAF it could have been its own 2008 subreddit. I realize this word gets overused on the Internet, but I was there in the Superdome, and what the Sooners did was just exquisite, exquisite trolling. Some football games are shootouts and some are chess matches; this was like watching a commenter ruin a blogger’s day over and over again. The blogger keeps getting madder, because when you care enough to run a basic spell-check (= try to establish the running game) you shouldn’t have to answer to some dude called pants_commander who has no respect for the shift key (= busts out an onside kick while leading by 14 with one minute left). But if the enduring image of Bama from this game was — apologies to AJ McCarron, who has many lovely trophies at his house — freshman running back Derrick Henry hog-plowing through the Oklahoma defense in the second half, the enduring image of Oklahoma was that ridiculous double–middle finger of a game-icing kick. It was probably an accident, which somehow made it more, not less, insulting. It was as though Stoops had partied so hard on the corpse of the SEC that he woke up with an unplanned tattoo.

Because Big Game Bob has, of course, invested important time over the last couple of seasons in airing some very vibrant emotions about the SEC and its dominance and its defenses. And while these were by letter narrowly confined to a critique of the media’s tendency to ascribe depth to conferences that are merely very strong up top, they were in spirit nothing else but calling out Alabama, and Stoops knew this and still knows it. The word “propaganda” was deployed in an unkind spirit. And most of the country, including me, certainly, and also Vegas, which made the Sooners a 15-point underdog, saw this Sugar Bowl matchup as an opportunity for the Tide to exact bloody retribution — against Stoops for disrespecting them, against Auburn for dumping them out to New Orleans in the first place, against the kicking game for having the temerity to exist. Instead, infant quarterback Trevor Knight, who wasn’t even a lock to start for Oklahoma, threw four touchdown passes, Alabama gave up 31 points in the first half after having surrendered a total of 52 first-half points in its previous 12 games, and Stoops blazed a fat chain of told-you-so doughnuts all over our national parking lot. He must have known he’d be on camera a lot, because he wore his nicest visor.

Afterward, a bunch of Oklahoma players piled onto a stage and broke ESPN. Did I mention that this game was amusing? 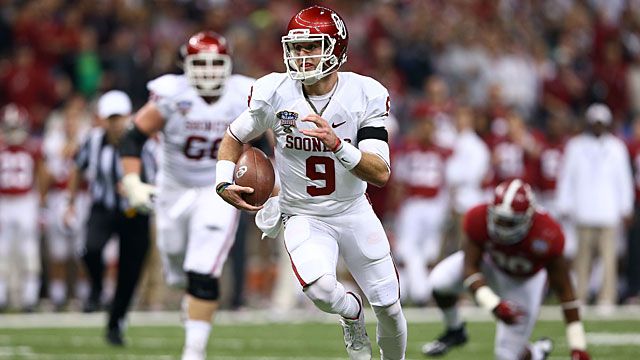 Funny” is maybe a weird adjective to stick on a football game, but then one of the great and underacknowledged facts of watching sports is how it can make you laugh. There was just a rhythm to this Sugar Bowl that felt like comic patter, with one character consistently landing the best lines. Your expectations kept getting upended. Alabama scored just four plays after the opening kickoff, 1:49 into the first quarter, on a 75-yard drive that featured a very casual 53-yard McCarron pass to Amari Cooper, and it was funny because, look, Alabama really was going to win in a blowout. Then Oklahoma went on a tough 38-yard drive to the Bama 24, and it was funny because, oh, hey, maybe the Sooners were good after all. Then Knight threw a dinky interception to Landon Collins, and it was funny because, whoops, no they weren’t. Then McCarron threw an interception on the very next play, then Knight hit Lacoltan Bester for a 45-yard touchdown on the play after that. Five minutes and 17 seconds had passed, the game was tied 7-7, and everything you knew or thought you knew1 had been confirmed and disconfirmed about four times.

And then OU just kept scoring — scoring risibly, off turnovers and billion-yard wager-the-ride-home passes, scoring in ways that couldn’t help but make you laugh. At halftime the Alabama band played a searing cover of “Can’t Help Falling in Love” that sounded like it was being beamed directly to the Sooner offense from the most tender cove inside Saban’s soul, and it was so goofy and tragic that it could have stood as an elegy for the entire BCS system, for bowl culture itself. Next year, a game of this magnitude will have consequences and angles and implications, whereas this year it just got to be its dumb, fun self.

And I don’t know … it felt pretty good, I think? I’m an Oklahoma State fan, which put me in a no-win spiritual situation going in — Oklahoma is Oklahoma, but the edge is still raw on the memory of Alabama squirming into the 2012 championship game a trillionth-place decimal ahead of my Cowboys, an accomplishment I still believe was based mostly on SEC mystique. If you’ve rooted for a high-level non-SEC school in the last decade, the chances are good that you’ve developed at least a mild complex about it. That inexhaustible supply of 10-star wrecking-robot recruits; all those portable-civilization-type fan bases. Watching New Orleans slowly fill up with Bama fans over the past 48 hours has been a case study in covert cultural conquest. One day it’s shadowy old New Orleans, cemeteries crumbling, moss swaying off the magnolia trees, and then the next day you look around and the whole streetcar is filled with Tide windbreakers and every conversation you overhear is between burly iron-haired couples and revolves around when Hendersons (no article) are getting to town. On Carondelet Street I watched a seedy local capitalist hawking crimson and white Mardi Gras beads off the back of an overturned paint bucket. “I did have more o’ the, uh, the Alabammer side,” he announced, “but come today I got more o’ this Oklahomer side here left.”

So even though I tried to hypnotize myself into hoping for a 48-point Tide blowout, I was empirically tickled by the way things went down. Watching Stoops’s postgame triumph-trot, I found the guy impossible not to root for. Probably only in that moment, but still; he was all:

FAMOUS ECONOMICS BLOGGER: And this, ultimately, is why, when all the evidence is taken into consideration, credit default swaps must be seen as a net economic positive and thoroughly undeserving of their status as the 21st century’s least understood financial bugbear.

TOOPSMAN_69: holmes yr graphs are jacked u don’t know how to read charts this shit will for real burn the economy with fire

FAMOUS ECONOMICS BLOGGER: Your critique is based on no evidence whatsoever. I will do you the credit of assuming you attended college and say to you what I say to my students: Do you expect me to overturn my considered views based on reasoning unsupported by data capable of withstanding the peer-review process?

TOOPSMAN_69: ahahaha what part of “with fire” do u not understand dicknugget

Anyway, I have no idea whether this win reestablishes Oklahoma as a top-five program, or what “top-five program” even means on the cusp of the playoff era. I just know that before the sun goes down again Barry Switzer will have single-handedly destroyed about 10 cases of Switzer Family Vineyards, and for once, it’s fun to be on his side. In its own silly way, this was a win for the losers and the mavericks, for the little guys whose challenge in life is keeping up with their own mouths. It seems bizarre to say that about an Oklahoma team, but the times are not what they were. Alabama may have the best team in America next season, but Nick Saban will never dream about them, because Nick Saban is through having dreams.