This is about celebrating celebrations. This is not a difficult thing to understand, so I will do my best in the coming moments not to make it so. In fact, I will do the least difficult thing I can think of, which is to answer fake questions that I’m asking myself.

What qualifies as a basketball celebration?

A basketball celebration, in this instance, is defined as “a thing that a person does immediately following an event that has taken place on a basketball court.” While the impetus for basketball celebrations is most often a made basket, that is not a specific requirement. Dikembe Mutombo’s Finger Wag, for example, followed a blocked shot. Rasheed Wallace’s Ball Don’t Lie often followed a missed free throw. And so on and so on.

It charts the locations of 22 separate basketball celebrations, placing them in quadrants based on their individual qualities, specifically as each relates to coolness, corniness, silliness, and transcendence.

A great long list of about 50 or so celebrations was made first. There was no preference given to time period. The list of 50 was culled down to 31 celebrations. Then those 31 were all weighted and given a cumulative score based on important things like the depth of the celebration’s cultural impact, regularity of its occurrence, and whether I could find a good picture of it occurring.

Yeah, I’m kind of churching it up some. Mostly, I just picked the ones I wanted to. Whatevs.

This started out sounding legit, but it’s devolving pretty quickly. Five questions ago you used the word “impetus” in a sentence. Now you answered the last question with “Yo mama.” Perhaps we should just get to the matrix?

Before we get to the actual matrix, let’s take a peek at a few celebrations that didn’t get squeezed on there:

If Blake Griffin is serious about turning around his image and becoming a more likable dude, he needs to dunk on someone’s head and then do the Shawn Kemp Finger Point. I mean, bro, come on. People don’t like Blake because they say he flops or is a bit of baby. Shawn Kemp led the league in illegitimate children AND PEOPLE LOVED HIM. How likable was Shawn Kemp? He once mega-dunked on Chris Gatling, in the 1992 playoffs, and you know how Gatling responded? HE DAPPED HIM UP. 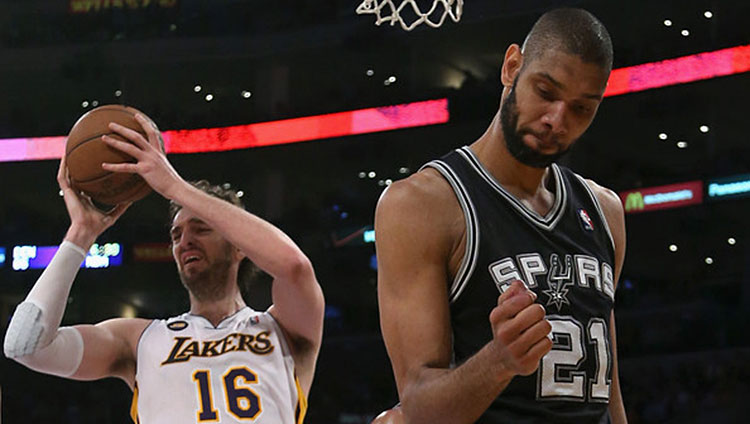 A slight fist pump from Tim Duncan isn’t the same as a slight fist pump from a normal human. There’s a celebration conversion going on, like how when you change American money to Mexican money all of a sudden you’re a millionaire. Like, if Tim Duncan is fired up enough to slightly pump his fist, that’s the equivalent of, say, Russell Westbrook riding a nuclear missile into the sun. Just something to consider.

I wish there were more NBA celebrations rooted in stereotypes. That’d be a neat tradition.

Now, the actual chart. Below you’ll find some GIFs and videos for some of the celebrations, with notes on why they are relevant. 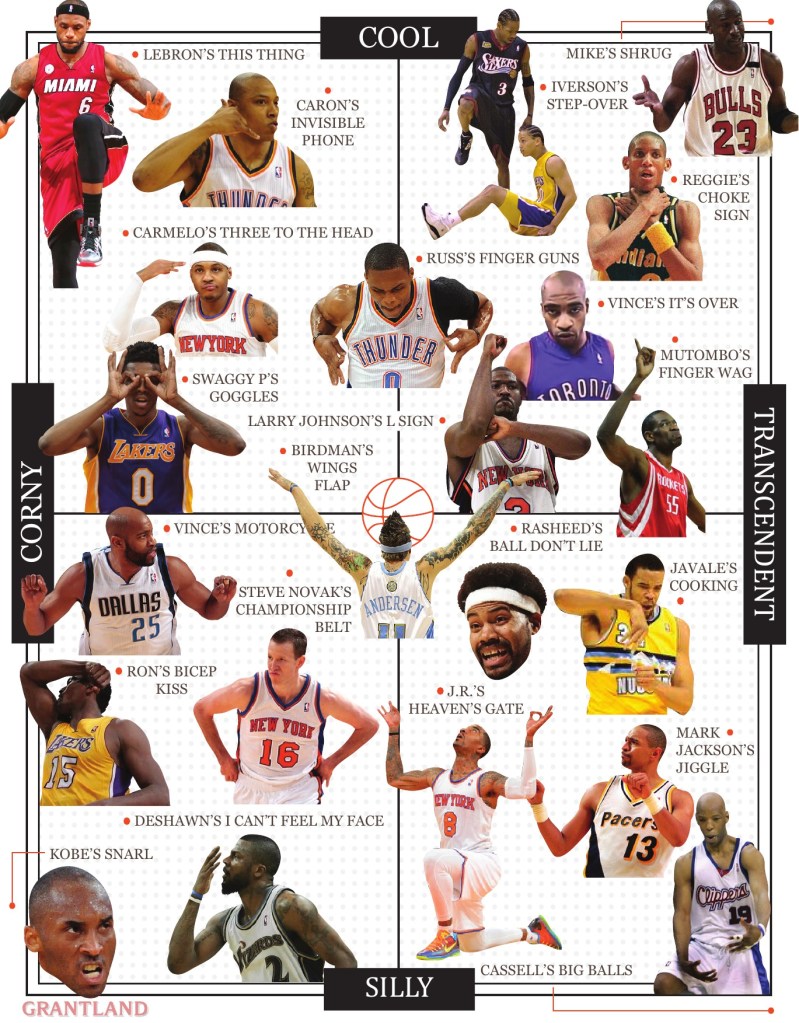 LeBron definitely didn’t just do this as an instinctual reaction one day during a game. He learned this thing. He was in the mirror, trying out different moves that he thought might be cool, and then he happened across this one was like, “Yup. Yup, that’s it, that’s the one.”

Or better still, maybe someone taught it to him? Like, maybe he was sitting at home in a Game of Thrones chair, with a cat in his lap, and there was this big, long line of people waiting to show him celebratory dances that they hoped he’d co-opt. Each person would walk up, say his or her name, do a different dance, then wait in silence for the verdict. And each time someone did one that LeBron found wanting, he’d look off to the side, make eye contact with a masked hangman standing there, then wordlessly drag his index finger across his throat. Oh, man. I hope it was that one.

Caron has always been an especially likable player. And he needed all that likability to yank this goofy celebration up as high into the Cool section as it is. I can’t even imagine how far down the ranks it would have plummeted if, say, Dwyane Wade had tried it, though “one hundred million feet” seems a safe estimation.

Carmelo Anthony’s “3 to the Head”

For, like, the first year of so of Carmelo doing this I didn’t realize it was a 3-pointer celebration thing. I thought he was pretending to put a finger-gun to his head and blow his brains out because he had realized he was on the Knicks. I’m still not so sure that isn’t what’s actually happening. Has anybody bothered to ask him? That’s a little thing called doing some real reporting.

That dude was like “THIS IS THE FIRST LETTER OF MY FIRST NAME.” That’s dope. He’s lucky his name didn’t start with an S.

The cool thing about Chris Andersen is how, from the beginning of his career to now, he turned into a character from Sons of Anarchy.

Sidebar: The Wing Flap thing is Andersen’s most well-known celebration, but it’s not his best. The best one is the one he mostly used to do in Denver pre-mohawk, when he used to wear his hair slicked back. Back then, whenever he’d block a shot into the stands or something equally cool, he’d squint his eyes, slide his hand from the front of his hair to the back, then mouth “Oooohhhh.” It was a perfectly appropriate celebration. You can kind of see him doing it here:

This is actually the thing that I do after my wife and I have sex. I get up out of the bed and then just jog right out of the room, smirking and shrugging toward a table of commentators and announcers who aren’t actually there.

At any rate, The Shrug is/was/will forever remain PERFECT. It was unscripted, unexpected — a completely natural reaction to the string of events that had just taken place. It didn’t seem like he was bragging (even if he definitely was). It didn’t seem like he was being a prick (even if he definitely was). It just felt like he was being absorbed by his own star power, which is a thing that we never saw happen to him again after that. The Shrug is a marker in time. We will never forget it.

Iverson rates as the Coolest NBA Player of All Time, and The Step-Over was the single dopest moment of his career.

1. It happened during Game 1 of the NBA Finals, so you have to calculate for that. Big stage, big consequences, lots of eyes.

3. The Sixers were playing the Lakers, a team that, if I’m remembering correctly, was something like 94-0 through the season and playoffs up to that point.

4. It was overtime, with less than a minute left, and the Sixers were up by two before Iverson hit the shot that preceded The Step-Over.

5. Iverson had already been brilliant the entire game, so you kind of had the feeling that he was maybe about to do something remarkable. (He actually ended up finishing with an unreal 48 points, six assists, and five steals, which is all the more crazy when you consider nobody else on that Sixers team could shoot from farther than four feet away from the basket, so Iverson was always basically playing 1-on-5 whenever his team had the ball.)

6. When The Step-Over happened, it happened DIRECTLY IN FRONT OF THE LAKERS BENCH. They were all standing up and seemed to be closing in on him, which definitely made it better. It was like he was standing in the middle of a crocodile pit. What a superhero.

7. He set up The Step-Over by completing a ridiculous step-back-crossover-into-a-jumper move.

8. The jumper, that beautifulBeautifulBEAUTIFUL thing, never even considered hitting the rim. It just swished straight through. The swish kind of matters, too.

9. Iverson fully understood what he’d done as soon as it happened. He paused for just a moment to admire his own brilliance, then looked down at Tyronn Lue with a gravity-shifting amount of smugness and contempt, stuck a sword through his heart, then stepped over the body he’d just dead-ed.

10. And of course Marv Albert was calling the game, and gave the moment a glorious “ … and steps OVER Tyronn Lue” framing.

The whole thing was flawless.

He did that. Wow. I wish we could relive ’90s NBA again. Can you even imagine how insufferable and villainous some of the current NBA guys would be if they were allowed to do this sort of thing?

The “It’s Over” is also an apt post-sex move, FYI.

This would have been much higher had DeShawn not begged LeBron James to get him a spot on the Heat last year. It seriously diminished the glory of this celebration.

That’s from the Knicks-Celtics playoff series in 2013. The play happened at the end of the first quarter. Smith ignored a WIDE-OPEN Chris Copeland in the corner, because you should always ignore Chris Copeland, no matter how big the font size is for “WIDE-OPEN.” Smith opted to launch a 36-footer over TWO DUDES instead. If you’ll allow for a bit of speculation, I think Smith did this because he’d received the Sixth Man of the Year Award right before the start of the game. Maybe he was feeling especially good about himself? I don’t know. Doesn’t matter. The shot was lovely, the celebration better still. J.R. Smith is a beautiful basketball angel on earth. I don’t think anyone would’ve been too surprised if the skies had actually opened up at that moment and then beam-of-lighted him right back to heaven.

A.k.a. the Onions Dance. (I want you to know that I spent, like, at least 20 minutes trying to draw a picture of this using only keystrokes. I couldn’t figure it out, though. Sorry.)

Doesn’t get quite as high a ranking as maybe you were expecting, but that’s because — AND THIS MIGHT SHAKE EVERY BELIEF YOU’VE EVER HAD — the ball does, in fact, on occasion, lie.

Still, “Ball don’t lie!” is a first-class basketball declaration, on par with shouting “Get that shit outta here!” when you block someone during pickup and “He can’t guard me!” after you make one shot in a row.

If your celebration gets its own commercial, it goes on the matrix.

Russ’s finger guns are better than everyone else’s for a number of reasons. For one, he blows on them before he puts them away. I’m guessing he does that because, in the movies, whenever someone shoots a gun, there’s smoke coming out of the barrel (Russell Westbrook: Pretend Gun Safety Advocate). But maybe it’s because his fingertips are raw from all of the shots he’s taken since he never, ever passes?

And let’s talk about the holsters. He holsters his finger guns like he never, ever wants them to ever, ever leave the holster again. He holsters them like they were disrespectful in front of company, and so now he’s putting them to bed early. If they were real guns, they’d have exploded his feet the very first time he put them away. I assume he does everything with the same aggression. Making a sandwich? Boom! Get on the bread, cheese! And then slams it down. Filling out his W-2? Boom! Zero dependents, yo! And then he big-faces his accountant. Putting a baby to sleep? Boom! Goodnight, little baby! And then he mega-dunks the baby into the crib.