There are certain people with whom — by the nature of their demonstrated bona fides — I choose not to argue. For example, when John McCain tells me that torture doesn’t work, I say, OK, I’ll take your word for it, and move on. In the 1980s when the Detroit Pistons and Boston Celtics played annually in the NBA’s Eastern Conference finals, Larry Bird, as was his wont, would come out early onto the floor of the Pontiac Silverdome to practice his shooting. As he went through his entire routine, and shot after shot banged away off the rim, you could see him growing increasingly frustrated. Later, he would always make it a point to tell us reporters that basketball was not meant to be played in domes. The basket was so far from the stands that it seemed to be suspended in midair. When the stands filled up, the shooting background was strange and unfamiliar, being located at a distance. When Larry Bird tells me that basketball should not be played somewhere, I take his word for it.

Saturday’s semifinals at the Georgia Dome in Atlanta were penny dreadfuls, the two of them. They were compelling. They were close and hard-fought. They had some surprise stars; Wichita State’s Cleanthony Early — and the world has far too few Cleanthonys for my taste — made some serious coin for himself against Louisville. They both turned, at least in part, on a single ghastly officiating call. (The block/charge on Syracuse’s Brandon Triche was pretty bad, but at least it was a fairly standard bad call. The held-ball call in the Wichita State–Louisville game was a preposterously quick whistle.) But the fact remains that the simple task of putting the ball in the basket is far too difficult while you’re trying to play the game in Castle Dracula.

Russ Smith of Louisville, an 81 percent free throw shooter, missed his first four attempts. His teammate, Peyton Siva, missed all five 3-point shots and, at one point, missed a point-blank layup. As for Monday’s other finalist, Michigan’s top three scorers shot 17 percent from the field Saturday. The four teams playing Saturday combined to shoot 26-for-83 on their 3-point attempts. None of them shot better than 45 percent, and Louisville only got that number because Luke Hancock somehow solved the riddle of the jumbled depth perception and shot 6-for-9. This wasn’t basketball. This was watching half-drunk teenagers trying to win stuffed pandas for their girlfriends on a carnival midway in East McJesus, Indiana.

“I couldn’t really see,” Siva said after the game. “It was too far away.”

It’s all too far away. The baskets look like they’re drifting in space. The seats are so distant that, when you shoot at them, the closest fans look like they’re sitting behind the walls of an aquarium — which sort of makes you, the player, like, the fish. Where do you go, seriously, when the size of the event makes the actual playing of the game impossible? There is no event so ludicrously overafflicted with corporate elephantiasis than the Super Bowl, but, when the last flyover has flown and we have finally finished Honoring America for the 33rd time, the game is still played within the confines of a regular football field. The end zone Joe Flacco saw in February looked to him to be located on pretty much the same dimensional plane as every other end zone he’d ever seen. The size of the event of the Final Four — and the corresponding unbridled greed that goes with it — forced the event to move into the domes, and playing the games in domes has completely destroyed the act most basic to the game itself. This is beyond absurd. And it also is beyond all recall. That horse is out of the barn, over the hill, down the lane, and standing at stud at Three Chimneys by now. The NCAA in its infinite avarice has made its signature event almost unrecognizable as actual basketball.

By all rights, Monday’s national championship game should be a show. Michigan is young and apparently fearless. Louisville is going to press the Wolverines all night, even though the Cardinal backcourt depth isn’t what it was before Kevin Ware got hurt, and that showed a little against Wichita State. There should be running. There also should be gunning. But my money says there won’t be. There will be banging and clanging, and bad whistles, and more banging and clanging until somebody snags a long rebound and throws an outlet pass to some dude who gets away from the pack and dunks. Everybody then will cheer, and there will be a new highlight for the highlight reel, and the people running the whole show will tell you this is what they had in mind all along. 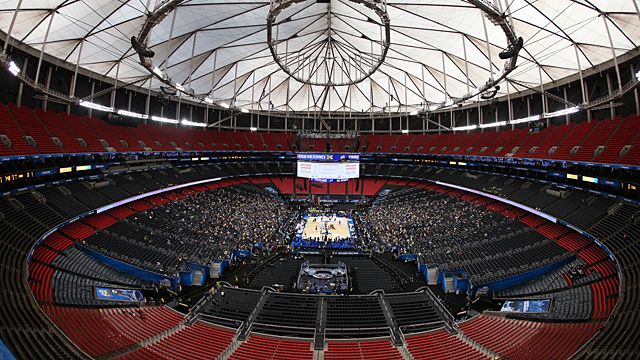 The weekend began with a demonstration of something that was both wilder than the Louisville press and more baffling than the Syracuse zone. That was NCAA president Mark Emmert’s employment of what many observers took to be the English language in an attempt to talk his way around the fact that the entire system over which he presently is presiding is on the verge of absolute collapse. The true nature of the NCAA as little more than a cartel profiting from underpaid — or unpaid — labor steadily had been becoming clear even before Taylor Branch hit the whole thing with a two-by-four in the pages of The Atlantic. The most immediate evidence for the prosecution came only last week, when Louisville’s Kevin Ware blew up his leg in a regional final, and it raised questions about who might be responsible for his medical bills — a fine illustration of the point made by Branch that the rubric of “student-athlete” had been invented so the colleges could dodge workers’ compensation claims arising from the brutal early days of college football — while Louisville started marketing Ware-themed T-shirts almost immediately after Ware had come off the operating table.

So Emmert took to the podium on Thursday, and simultaneously took refuge in some combination of bureaucratese and fluent Weaselspeak that was within 3-point range of actual English. He was attempting to explain how the NCAA’s latest stalling tactic — the “miscellaneous expense allowance” (who names this stuff, anyway?) — doesn’t in any way conflict with the organization’s stated position that a college athlete should not be paid. Gaze in awe.

Catholic theologians who argue that the Church must not change its position on, for example, birth control, occasionally do so by arguing that a pope who would change such policies has to account for all the people who were accounted sinners under the previous policy and may in fact, at the moment, be residing in the postmortal suite of the Gehenna Arms. (No, really. “What do we do about the people who already are in hell for violating the old policy?” I’ve actually heard this.) Emmert’s gotten himself in rather a similar box here. Down through the years, various people — alumni, boosters, shoe company reps, the odd talent scout or five — have been “covering the real cost of attendance of the student-athlete” and, when they or the athlete got caught, the athlete got shamed and his school got punished. Now, with his organization in moral tatters, and the whole business model tottering around him, Emmert decides in a squid-cloud of word-ink that a little extra somethin’-somethin’ is really ethical as long as it’s laundered through euphemism. What about all those schools that found themselves on probation down through the years for doing exactly what Emmert’s proposing now? Do we all owe Dana Kirk and the Fab Five an apology?

Mark, dude. Let the light dawn. As soon as you allow athletes to pick up extra money because they are athletes, that’s the ball game. It doesn’t matter if you call it a salary, or a stipend, or a “miscellaneous expense allowance” — though I really wish you wouldn’t call it that — you are giving the basketball player extra money because he is playing basketball. He is playing and the school is paying. I have been paying close attention to this stuff for going on 40 years and what you’re proposing is exactly what the NCAA told me was wrong and awful through about 38.5 of those years. You were up there, because the real powers in the sport, the TV networks and the university presidents and the commissioners of the various conferences, let you in through the tradesman’s entrance to be the front man for a crumbling charade, essentially to make the same argument Chris Webber was making 20 years ago when he asked why his “miscellaneous expenses” were not allowed. The players know it. Russ Smith and Luke Hancock and Trey Burke and Mitch McGary all know it. They knew it when they got here and they’ll know it tonight when they throw the ball up to make a whole lot of strangers even more wealthy. They all know the system’s dying, and that the loudest noise in Atlanta is not the cheering or the pep bands. It is the distant, thundering hooves of all those horses long ago let out of the barn.