Los Angeles Clippers shooting guard Eric Gordon took his game to another level last season, his third in the NBA, by scoring 22.3 points per game and improving his PER from 14.1 to 18.5. Gordon’s game was pretty efficient, finishing the year scoring 1.001 points per possession, ranking him among the top 20 percent of all NBA players. Gordon’s true shooting percentage of 56.6 dipped slightly from his first two years, but it was still good enough to place him 11th among shooting guards who played significant minutes, according to HoopData.com. Gordon’s game is already efficient, so before we look at how he can take his game to the next level, let’s take a look at what Gordon already does well.

The first area in which Gordon has really improved since his rookie year is the pick and roll. Despite playing a majority of his minutes at the shooting guard position, pick and rolls were Gordon’s bread and butter last year. According to Synergy Sports Technology, Gordon came off ball screens in 27.4 percent of his possessions. When he did so, Gordon was able to post a PPP of 0.944, placing him among the top 10 percent of all NBA players when using a ball screen. What made Gordon so successful was his ability to make pull-up jumpers off the dribble. Gordon is very quick with the basketball in his hands, and that puts the pressure on his defender as he drives off the screen. If the defender plays a step back to contain Gordon’s drive, it leaves Gordon with an open jumper. Gordon’s shot is one of the prettiest — and most fundamentally sound — in basketball, and the result is a very high effective field goal percentage of 48.6 when using ball screens: 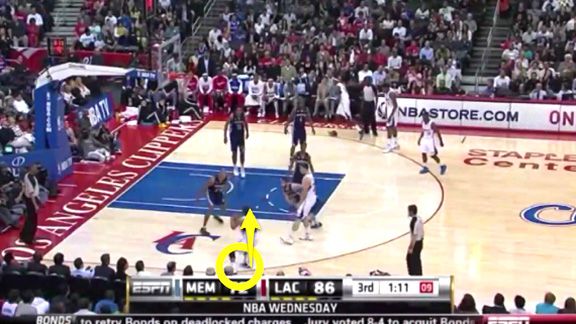 Here, Gordon comes off a screen set by Blake Griffin. Griffin’s defender steps out but doesn’t show hard, and Gordon uses the screen and starts to attack him with the dribble. 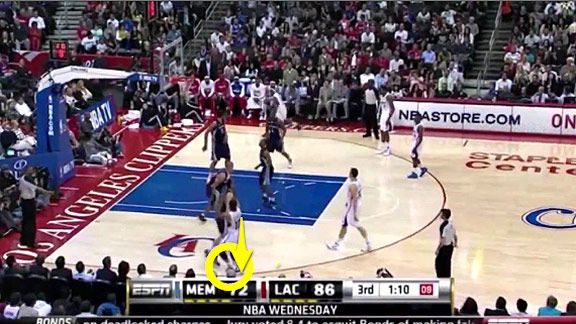 With all of this space, Gordon decides to pull up for a jump shot. Gordon shoots so well off the dribble because he always seems to stay on balance. He has the rare ability to go from driving hard toward the hoop to stopping on a dime and rising straight up. 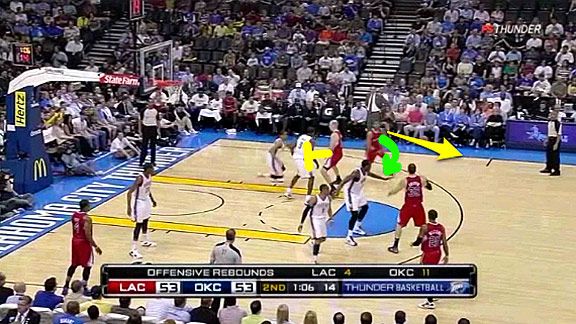 Now that Gordon is able to go straight up, it means that he is able to land in the same exact spot with both feet firmly on the ground. Here is the shot, and another, in real time:

While taking a jump shot, the lower body — specifically the ability to jump straight up and down — is important because it removes an additional variable from a player’s shooting motion. Since he’s not floating to one side or the other, he doesn’t have to adjust for that drift and can focus on shooting straight at the rim.

Also, if a player jumps at the same height and straight up and down every time, it’s easier to identify what went wrong with his missed shots and then fix it. If he’s always floating in different directions or not putting the same amount of legs into every shot, trying to adjust his technique becomes guesswork. Gordon’s picture-perfect form allowed him to avoid lengthy shooting slumps last season.

Now, because Gordon’s pull-up jumper is a threat when he uses ball screens, defenders are forced to play him tight. This frees up Gordon’s passing lanes:

The PPP of plays in which Gordon passes to the roll man is 1.174, and his screeners, after receiving the ball, shoot 60.6 percent from the field. Gordon has great vision and passing ability, so when the defense pressures him and the floor opens up, he can find an open teammate in scoring position. More often than not, Gordon makes the correct pass-or-shoot decision when he comes off screens, and the result is either a made jumper or an easy dunk for the screener. Of course, it doesn’t hurt that Blake Griffin is usually the forward setting picks for Gordon and then diving to the hoop.

Gordon also had success last season as a spot-up shooter. He posted an effective field goal rate of 54.9 percent and a PPP of 1.143 in catch-and-shoot situations, which put him in the top 13 percent of all NBA players. Once again, Gordon’s shooting form is the key to his success:

Gordon keeps his elbow underneath the basketball. While he shoots from his shoulder, his guide hand is in the correct position on the side of the ball, and he gets fantastic rotation on his shot. That, in addition to his lower-body positioning, means that Gordon will make more spot-up jumpers than he misses.

While it’s obvious that Gordon does a number of things well, he still needs to improve to become the star the Clippers hope he’ll be. The first area in which Gordon struggles is moving without the ball. A shooter like Gordon should be a threat when working off the ball, but when Gordon comes off screens away from the ball, he only shoots 38.8 percent. Gordon’s problem is that he struggles to get squared up to the basket when on the move: 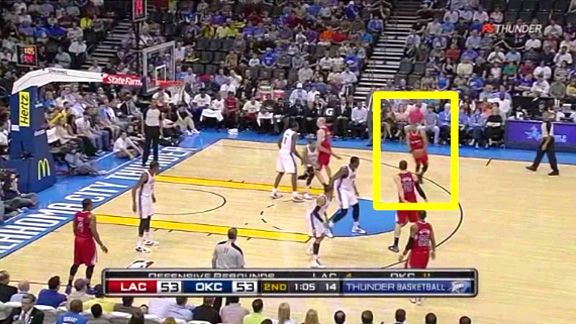 Here, Gordon comes off of a pin-down screen set by Chris Kaman. As the pass approaches him, Gordon should be curling toward the pass, allowing him to make the catch, square up, and shoot. But Gordon doesn’t do that. Instead, he runs straight with his back away from the rim as the ball comes to him. 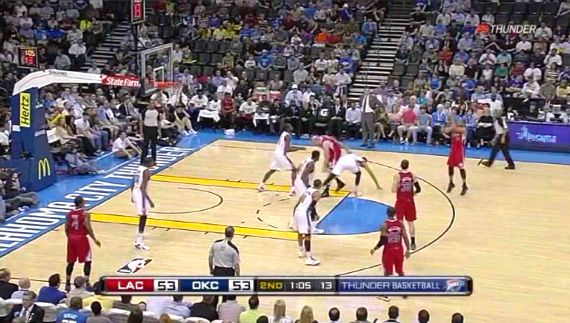 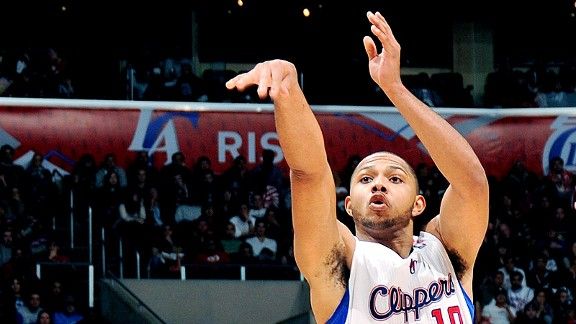 Gordon still has his strong form, but he wastes too much motion and time between making the catch and getting squared to the hoop. The result in these situations is usually a miss. Here are a few more clips:

Gordon also struggles in transition. When he is the ball handler on the break, Gordon turns over the basketball 8.4 percent of the time. This really hurts his efficiency, resulting in a PPP of 1.201, which is not even in the top 40 percent of NBA players in these situations. Why does Gordon commit so many turnovers in transition? He tends to force the issue and put the pressure of scoring squarely on his shoulders:

In the above situations, Gordon tries to create transition opportunities even when they aren’t there. In the first clip, Gordon could make a simple pass to Blake Griffin, but instead he fakes the pass, tries to Euro-step past his defender, and loses the ball. In the other clips, Gordon pushes the basketball in situations in which they don’t have the advantage. He forces it in a 2-on-5 situation and a 2-on-3, and also tries to push the ball in transition after a made basket by the opposing team. When he tries to create fast-break opportunities without the numerical advantage, Gordon’s passing lanes in these situations close up quickly, and the result is turnovers.

Last year, we saw Gordon take a step in the right direction. He became a very good ball handler and decision-maker when coming off screens, and he became a spot-up shooting threat. However, if he wants to continue to develop, he must learn to play effectively off the ball. Additionally, Gordon really needs to take better care of the basketball in transition. The Clippers are a young and athletic team that will probably try to amp up the pace, and with Gordon acting as a primary ball handler, he can’t turn the ball over so often. If Gordon can clean up those two areas, there is a good chance that he can turn into a superstar.

Previously by Sebastian Pruiti:
Chris Paul and the Lakers: What could have been
How John Wall can become a Star in his Second NBA season
The Pros and Cons of Kentucky’s Anthony Davis
Thomas Robinson Grows Into His Role at Kansas
The Problems with Austin Rivers