Anyway, with all three “Godfather” movies being released on a spectacular DVD package set next week — including the third one, which should immediately replace “Rocky V” as “The DVD I’m Least Likely to Watch Unless I’m Being held at Gunpoint” — it seems like the perfect time to review this year’s disastrous Red Sox season. Instead of postseason awards for the Sox, I’m handing out 50 quotes from the greatest movie of all time.

Page 2 will run the first 24 today, and then offer up the sequel Thursday.

1. “My wife is crying upstairs. I hear cars coming into the house. Consigliere of mine, why don’t you tell your Don what everybody seems to know?”
2. “I was just coming upstairs to wake you.”
3. “But you needed a drink first. (pause) Well, now you’ve had your drink.” (long pause)
4. “They shot Sonny on the Causeway. He’s dead.”
To my father … We had pretty much the same exchange last March, when I called him at work to tell him that Nomar injured his wrist and probably needed surgery. Not good times. Bad times. A dreadful omen for what turned out to be a dreadful, unhappy season.

5. “It’s a Sicilian message. It means ‘Luca Brasi sleeps with the fishes.’ “
To Troy O’Leary … who has been sleeping with the fishes for the past two seasons (averaging .253 with 13 homers, 60 RBI and a .735 OPS). When the season ends, somebody should mail Dan Duquette a dead fish wrapped in a No. 25 Red Sox jersey.

6. “I’m a little worried about this Solazzo fella. I want you to find out what he’s got under his fingernails. Go to the Tattaglias, make him think you’re not too happy with our family and find out what you can.”
Don Corleone’s biggest misfire (sending Luca Brasi undercover to get a handle on Solazzo the Turk) goes to Jimy Williams’s biggest mistake … his indefensible refusal to play Trot Nixon every day. Jimy apparently planned on platooning Trot well into his mid-40s, before injuries forced Nixon into the everyday lineup last June, after which he batted .295 with a .900-plus OPS.

(By the way, have there ever been three better characters killed off in the same movie than Luca, Vito and Sonny? I always thought they should have kept Luca alive and eventually spun him off into a sitcom about a stuttering hit man.)

7. “I like to drink wine more than I used to.”
To acting Sox pitching coach John Cumberland … who was fired by the team in early-September because of an alleged drinking problem. A baseball coach with a drinking problem? Come on! Get out of here! Are you kidding me?!?!?!

(One fun thing about Cumby’s firing: It led to Nomar’s infamous “That’s why nobody wants to &*%#@&% play here” quote. Feel the love!)

8. “Don Corleone, I need a man who has powerful friends. I need a million dollars in cash. I need, Don Corleone, those politicans that you carry in your pocket, like so many nickels and dimes.”
To the next Red Sox owners … They’re going to need someone like Don Corleone to get a new ballpark built in Massachusetts, especially if they’re aiming for South Boston or the Waterfront. Fenway Park is like VD … we can’t get rid of it.

9. “Fredo, you’re my older brother and I love you, but don’t ever take sides with anyone against the family again. Ever.”
The most ominous line in the movie goes to the most ominous Sox game of the season … a marathon late-August loss in which Derek Lowe loaded the bases with one out in the 18th inning, Kerrigan chose to keep the infield at double play depth, and Texas’ Bill Haselman dribbled a slow infield grounder to score the winning run. Just devastating, one of the worst losses I can remember. To make matters worse, an ailing Nomar tried to play the following afternoon and ended up re-injuring his wrist. The team hasn’t been the same since.

(Let the record show that the 18-inning loss started a nine-game losing streak and a 6-22 spiral that finally pushed the team below .500 this week. Even Khartoum’s stud career didn’t collapse that fast.) 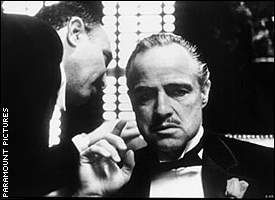 10. “Why don’t you cut the crap? I got more important things for you to do. How’s Paulie?”
11. “Aw, Paulie. Won’t see him no more.”
My favorite exchange of the movie goes to one of my favorite games of the season … Manny’s two-out, ninth-inning, game-winning single off Mariano Rivera back in April. Our best against their best, the first Yanks-Sox game of the season, the Fenway crowd standing and hoping… and The $160 Million Man delivered.

(Random tangent: Every time a famous celebrity dies, my stepfather calls me and does a Clemenza imitation — “Hey, you know so-and-so? Aw, won’t see him no more” — unless I’ve called him and done it first. We’ve been beating that joke into the ground for 20 years. I’m not kidding. Has any movie affected the everyday lives of people more than “The Godfather”? Of course not.)

12. “Let’s face it, Tom, in all due respect … the Don, rest in peace, was slipping. Ten years ago, could I have gotten to him?”
To Red Sox owner John Harrington … Always adroit at spin control in the past, Harrington took an utter pounding on the radio and in newspapers this season once the team fell apart and everyone started pointing fingers … and he deserved it. Even Keyser Soze was easier to find.

13. “Mikey, why don’t you tell that nice girl you love her? ‘I love you with all-a my heart, if I don’t see-a you again soon, I’m-a gonna die …’ “ Another classic Clemenza line goes to Hideo Nomo’s no-hitter … one of those fun, quirky, “What the heck just happened there?” games that set the tone for a bizarre season. For three years, Sox fans had waited patiently for Pedro’s inevitable Date with Destiny — the first Red Sox no-hitter in four decades, mind you — when The New Guy came out of nowhere, snuck into the bar and took Destiny home. And he couldn’t even speak English! Just a stunning turn of events.

Just a nightmare. Maybe the first time I’ve ever fully understood why some nations end up having coup d’ etats.

15. “My father made him an offer he couldn’t refuse: Luca Brasi held a gun to his head while my father assured him that either his brains or his signature would be on the contract. That’s a true story. (pause) That’s my family, Kay. It’s not me.”
To Jimy Williams … Kay (Diane Keaton’s character) should have left skidmarks running from Michael Corleone the moment she heard this story, and Jimy should have left skidmarks this winter the moment the Sox brought him in as a lame duck manager. Jimy couldn’t win, irrespective of the fact that he might be legally insane.

(By the way, I always thought Kay was the weak link of the Godfather series — a poorly written, poorly acted character for whom you could never get a feel. Remember when Michael sees her after his exile in Italy — when he married someone else, no less — and convinces Kay to abandon her elementary school class and get into his limo within five minutes, even though he was already starting his “Don’t ask me about my business” routine? Gawd-awful.)

16. “I don’t like violence, Tom. I’m a businessman. Blood is a big expense.”
Solazzo the Turk’s finest line goes to Frank Castillo … who would definitely play Solazzo if they ever re-made the Godfather using Red Sox players. This was actually a fun season for Red Sox lookalikes — my readers pointed out a bunch of them over the months, including Craig Grebeck (the “Unfrozen Caveman Lawyer” from Saturday Night Live), Hideo Nomo (the bad guy from “Karate Kid 2”), Mike Lansing (Chuck Norris), Morgan Burkhart (Babe Ruth), Brian Daubach (the “Return of the Jedi” version of Mark Hamill) and Dante Bichette (Private Pyle from “Full Metal Jacket”).

And don’t forget the eerie vocal similarities between Carl Everett and Mr. T. — you could almost imagine Everett screaming, “Don’t give me no jibber-jabber, Jimy Williams! I pity the fool who stands up to me! I pity the fool!”

And it wasn’t just the numbers. During those first two months, every one of Manny’s at-bats seemed to last nine or 10 pitches; in fact, watching him work pitchers, wait for the right pitch and crank the inevitable mistake was probably the most entertaining running subplot of the Manny Era. Once this team started to fade, those multi-pitch AB’s became obsolete — Manny looked like a guy who wanted to swing at the first decent pitch and get back to the dugout as soon as possible.

19. “Look how they massacred my boy …”
To Jason Varitek … who fractured his left elbow diving for a foul ball June 7. In some ways, he was even more indispensable to this team than Nomar and Pedro (they never even adequately replaced his presence behind the plate). Granted, Pedro’s absence contributed heavily here, but the fact remains that Boston’s pitching staff submitted a 3.34 ERA in April and May, followed by these numbers: 4.06 (June), 4.39 (July), 4.86 (August), 5.09 (September).

(Note: There’s a reason I haven’t discussed the scene where Sonny got shot 238 times at the tollbooth. … I wasn’t ready to discuss it yet. Dozens of viewings over the years and it still hurts every time. I mean, every time. It’s like when Fredo gets on the boat in “The Godfather II” — even though you know what’s about to happen, you still find yourself saying, “No, don’t get on the boat, Fredo, come on … please … don’t get on the boat …”)

20. “I never thought you were a bad consiglieri. I thought Santino was a bad don, rest in peace … There are reasons why you must have no part in what’s about to happen.”
21. “Maybe I could help.”
22. “You’re out, Tom.”
To Derek Lowe… who lost 10 games and blew six saves in the first five months of the season. Translation: You could directly link him to 12 different Red Sox losses. Twelve!?!?!?!?!?!

(After a promising start, Lowe emerged as the Bob Stanley of this generation, right down to the “Finding a different way to blow a game each night” routine and the “Move me to the starting rotation and I’ll look good in a couple of meaningless starts near the end of the season” routine. We’ve lived through it before, and we’ll surely live through it again. I will now light myself on fire.)

23. “Tom, that was personal. This is business, and this man is taking it very very personal.”
24. “It’s not personal, Sonny. It’s strictly business.”
To poor Tim Wakefield, who has been yanked back and forth between the bullpen and the starting rotation over the years more times than you could count … and he still managed to post decent numbers in ’01 (3.86 ERA). Probably the one Sox player who had a right to bitch this season. And he did.

Just for the record, “It’s not personal, it’s only business” was one of my favorite lessons from the movie, along with these beauties: