Not to mention the engine that would drive the fledgling Pac-12 Network, currently embroiled in a battle with DirecTV over whether it is actually a channel worth carrying. “They’re saying they don’t believe our fans need it or want it,” said Pac-12 commissioner Larry Scott at a halftime press conference that doubled as a primer on the hierarchy of American cable television distribution. [Author’s note: I am fortunate enough, as a Time Warner subscriber, to have access to the Pac-12 Network — though not the NFL Network, because the NFL does not have fans quite like the Pac-12 does, apparently — and as far as I can tell, 83 percent of the programming at this point consists of Summer Sanders talking about how badly she wanted to work for the Pac-12 Network.] 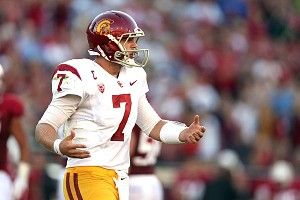 “Rhymes with Hertz,” according to the pronunciation guide I was given in the press box, which felt kind of like a veiled O.J. joke, given the circumstances.