When I play the “Madden” video game in franchise mode, one goal looms over all others: an undefeated season.

Sure, it’s practically impossible to finish undefeated at the All-Pro level or higher without taking some creative liberties. You pull off one-sided trades that would never happen in real life, stuff like “Eugene Wilson and a No. 2 for Ed Reed!” You sign promising rookies and young starters to lengthy extensions they’d never sign in real life unless their agent was drunk. You pluck talented veterans off the free-agent wire and convince them to sign humiliating one-year deals. You spend two solid hours tinkering with the logistics of a lopsided draft-day trade that can be accepted by the invisible “Madden,” just because you want another second-round pick or a third receiver. These are the things you do. You do them, and you don’t think twice.

Even then, those moves don’t guarantee an undefeated season. You need to pick a contending team that features a stud QB or running back. You need copious amounts of luck during the fake season. You need to avoid killer injuries and bad weather games against good teams. You need to avoid the No-Effing-Way Game, a hidden trigger in franchise mode that unleashes a flurry of unexpected turnovers and bad breaks against you for a specific game. I can’t tell you the exact number of times I tried to go undefeated and couldn’t do it without major help over the past 10 years — and by “help,” I mean “pressing the RESET button as the undefeated season was going down in flames and starting that game again” — but it’s in the dozens and, almost always, the quest ended with a controller being whipped angrily across the room.

The Sports Gal apologizes for her spotty, Britney-like performance in 2007 and promises to come back strong for 2008 — as soon as she’s getting more sleep and not feeding a young baby 140 times per day. Here’s her Super Bowl pick: Giants +12.

Have I ever gone undefeated without cheating, hitting the RESET button, dropping down to an easier level or turning off the button that allows the invisible “Madden” commissioner to reject lopsided deals? Never. Not once. I’ve always had to bend the rules to do it. In a million years, I never imagined the real-life Patriots could finish 19-0 before my “video Patriots” did. But we’re two days away. It might happen. It really might happen. And I’ve spent the past two weeks wondering two things:

1. Is this really happening?

(The answer, apparently, is yes.)

2. Could this particular Patriots season be emulated by another team in the future, or were the 2007 Pats something of a perfect storm?

Over the past few weeks, I have become mildly obsessed with how this moment came to be — and by moment, I mean “the chance to go 19-0” — partly because everyone is dissecting the Patriots these days, and it’s frustrating to hear dumb points or half-assed thoughts about my favorite team, and partly because there’s so much dead time during an NFL season that there’s nothing to do but think about things that happened or might happen. Nothing exemplified this quite like the infamous TMZ video of Brady limping around while wearing his ankle boot after the Chargers game. It wasn’t even that exciting of a video — just Brady limping with an ankle boot — but because it’s the Patriots and 19-0 is at stake, I studied that clip more diligently than anything since the “Pretty Woman” scene when Julia Roberts almost revealed her right breast. 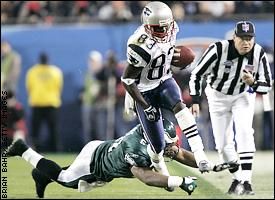 Bored of the same talking heads and the same writers saying the same things, I purchased Christopher Price’s book “The Blueprint” last weekend, which was released before the 2007 season and attempted to put a “Moneyball”-like spin on the Belichick era. I liked the book and thought Price did a solid job explaining the philosophy behind the first three Super Bowl seasons, particularly how the Patriots built through the draft, scoured the market for free-agent bargains (by law, I’m required to mention Mike Vrabel here), showed an uncanny ability to cut ties with veterans at the perfect time, tied up rookies and role players to longer-term (and more favorable) contracts, showed an extraordinary amount of patience during the draft, pursued character guys, avoided potential cancers, built a foundation around hard-nosed, team-first guys, created a culture of winning and never sold out long-term goals for a short-term fix.

Here’s what fascinated me as I was finishing the book, which was written too early to put 2006 and 2007 in the proper perspective: As well as Belichick’s blueprint worked for the ’01, ’03 and ’04 seasons, it failed miserably when top receiver Deion Branch held out before the ’06 season. As far as Belichick was concerned, the Pats won three Super Bowls by not overpaying for players, so why start overpaying them now? That’s what the blueprint said — don’t pay All-Pro money for guys who aren’t All-Pros — and, unfortunately, the blueprint killed their 2006 Super Bowl hopes. When they traded Branch to Seattle for a future No. 1 pick, not only did the Pats struggle to score points with a below-average receiving crew, but on the biggest moment of the season — third-and-4 to clinch the AFC title in Indy — not a single receiver on the team could be trusted to make a play. And none did.

The Branch debacle ended up costing the Patriots a Super Bowl trip, but it also planted the seeds for what happened this season. The team had put aside significant money for Branch’s signing bonus, so they used the extra money to restructure deals for guys like Dan Koppen, who received a creative five-year extension with a signing bonus that made his 2006 cap figure $5.033 million and his 2007 cap figure a paltry $900,000. On top of that, Tom Brady was furious because he had taken less money for the good of the team, so the Pats had to make good by him. And since the Branch debacle and some other shrewd spending had created extra cap space … voila! That’s how the Pats ended up with last spring’s splurge that landed Wes Welker, Randy Moss, Donte’ Stallworth, Adalius Thomas, Sammy Morris and special-teams ace Kelley Washington. Could you say losing Branch killed them in 2006 but pushed them to a higher level in 2007? Actually, you could. 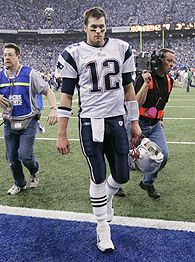 Although other teams started emulating many of their “Blueprint” variables — particularly bargain-hunting in free agency, as well as building around draft picks and character guys and zealously protecting future cap space — it would be impossible to emulate the Branch debacle, nor would you want to try. But that crushing Colts defeat inspired the Pats to break away from the blueprint just a little and, by all accounts, Belichick’s belief that the Patriots let up in Indianapolis with an 18-point lead spawned the “60 minutes!” mantra that everyone yelped throughout this entire season. They never let up, not even in the closing minutes of blowouts … and that wouldn’t have happened without the Branch trade or that blown lead in Indy.

That’s not the only thing about the 2007 Pats that probably can’t be emulated. What about …