There exists a certain pop-cultural archetype that’s stridently anti–pop culture. Let’s call it the Myth of the Reinvigorating Retreat: It starts with a person departing civilization and setting off into some great wide open. When this person — usually a man, often white, and recently situated uncomfortably in the vicinity of 30 — comes back to the world, he is wiser and more worldly and yet somehow simpler and more serene. In the parlance of our times, he is now a totally chill bro, unfettered by modernity. The original chill bro was Henry David Thoreau, who wrote in Walden that he “wished to live life deliberately” by holing up in the woods for several years and not paying his taxes. One century later, Bob Dylan’s withdrawal from the late-’60s counterculture in upstate New York transformed him from a speed-freak lyrical Jesse James to a gentleman-farmer type who warbled lines like “Peggy Day stole my poor heart away / by golly, what more can I say” in a lacquered croon. It could be argued that Rocky Balboa went on a Reinvigorating Retreat in Rocky IV, though he applied what he learned from hauling lumber up Siberian mountainsides in decidedly unchill fashion on Ivan Drago’s face. A better example from the movies is Emile Hirsch’s credit card–burning imp in Sean Penn’s dopey adaptation of Into the Wild, which jettisoned Jon Krakauer’s nuanced investigation of the Reinvigorating Retreat myth in order to get lost in a wilderness of superficialities.

Then there’s Jimmy Buffett, who long ago abandoned his early persona as an outlaw-era Nashville country singer to take up the guise of the South Florida beach bum–cum–populist philosopher. Buffett’s retreat has lasted more than 40 years, and he has turned it into an industry — the restaurant chain, the brands of beer and tequila, the Atlantic City casino, and the lucrative annual concert tours are all part of a package selling the Jimmy Buffett experience as a take-home escapist diversion, a retreat without the retreat. Occasionally this package even includes a new album like Songs From St. Somewhere, Buffett’s first collection of new material in four years.

St. Somewhere highlights like “Too Drunk to Karaoke” and “Einstein Was a Surfer” taste like Buffett’s familiar cocktail of bonfire acoustic strums, perpetually ringing steel drums, tequila, middle-aged ennui, salt, and wrist sweat. “Somethin’ ‘Bout a Boat” approximates a reggae rhythm, and I think “Tides” has something to do with serenading mermaids. It’s all just too much fun, like mandatory Hawaiian Shirt Day at the office is just too much fun. But I don’t begrudge Jimmy Buffett any of his shtick. Somebody had to concoct a scheme to squeeze millions of dollars out of the bosses who think Hawaiian shirts are unironically awesome, and Jimmy Buffett is that guy. 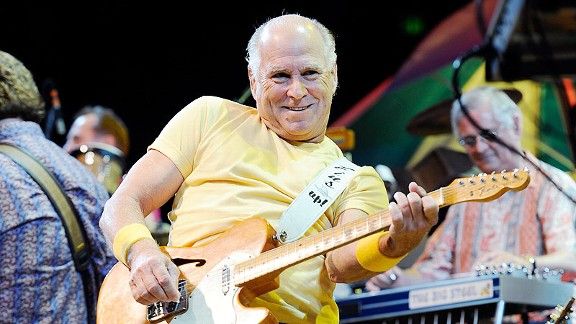 Besides, analyzing Songs From St. Somewhere too closely is like obsessing over the cleanliness of your booth at Señor Frog’s — sometimes it’s best to just accept the revelry at face value. Buffett might be the musical equivalent of a mullet creep, but he understands the power of his own iconography. On Somewhere‘s album cover, he stands on an ocean shore with a guitar strapped to his back, basking in the glow of an eternally radiant sun. He’s smiling at us over his shoulder. “You think I can get away with this?” his expression seems to say. He can, and in spite of Jimmy’s casual posture, it’s harder than it looks.

John Mayer shot the cover photo of his new album, Paradise Valley, a couple thousand miles away from Buffett’s version of paradise, but he was after something similar. Mayer recorded Valley at his new home in Montana, and as he explained earlier this year to Rolling Stone, at least a couple of songs were written in a barn. Short of decamping to a Northern Wisconsin cabin (or the sandy beaches of Buffett’s Florida), Mayer couldn’t have picked a more romantic setting for his Reinvigorating Retreat record. “It’s just been fantastic,” Mayer said of his new rustic digs. “It’s not just about who you’re dating, it’s about who you know who works at the place you get your coffee from, and knowing what the high school mascot is of your town.” Mayer has turned his wishes of living life deliberately into reality, and apparently he has never been happier (or friendlier with his neighborhood barista).

You can hear Mayer attempting to channel whatever sort of salt-of-the-earth realness that living in Montana signifies in his mind on Valley‘s opening track “Wildfire,” which lifts its snaky guitar licks from Jerry Garcia and its lyrics (“’cause a little bit of summer’s what the whole year’s all about”) from a tourism ad. But Mayer truly spells it out on that (ridiculous) cover: Awkwardly accessorizing a wide-brim cowboy hat, oversize poncho, enough layers of jackets and vests to flummox Marty McFly, and a trusty mutt who appears to have mistaken him for a boyishly handsome scarecrow, Mayer aims for Unforgiven gravitas and lands on Young Guns 2 shrimpiness. His facial expression also seems to say, “You think I can get away with this?” though it’s not as assured as Buffett.

We all know why John Mayer had to run away, but let’s briefly rehash the particulars of his fall from grace anyway, just for fun: In 2010, Mayer did an interview with Playboy where he mistakenly uttered hilarious statements like “my dick is sort of like a white supremacist” and “I could have fucked a lot more girls in my life if I hadn’t been trying so hard to get them to like me” and “when I’m fucking you, I’m trying to fuck every man who’s ever fucked you, but in his ass” into a reporter’s tape recorder. Oh, and he also dropped the N-word, because that has never not backfired when perpetrated by a smirky Caucasian man.

In the aftermath, teeth gnashed and nostrils flared. Mayer was accused of racism and homophobia, though I don’t think anyone actually believed he was a racist or a homophobe. He played (and lost) the same game that a lot of celebrities, athletes, and politicians perform as a matter of course in our postmodern media environment — he winkingly played up the douchiest parts of his personality that conformed to his douchey image as a way to acknowledge and then distance himself from that image.1 The problem is that John Mayer has always only been intermittently self-aware — knowing that people might be tickled by the cheeseball who wrote “Your Body Is a Wonderland” talking about the 300 vaginas he sees before he gets out of bed in the morning is considerably less valuable than the ability to anticipate the fallout from likening your penis to David Duke. Mayer’s crime wasn’t prejudice, it was hubris. When he subsequently came down with a throat condition that threatened to rob him of his voice and prematurely end his career, Mayer’s post-interview punishment seemed to take a biblical turn.

Mayer subsequently blamed his conduct in the interview on his “quest to be clever,” which had been previously nurtured by his appearances on Chappelle’s Show and his smug VH1 program, John Mayer Has a TV Show.

But even Job was allowed to eventually return to health and prosperity. For Mayer, the journey back began with last year’s Born and Raised, the required-by-law contrition album, where Mayer wasn’t afraid to openly grovel. (Like on the song “Shadow Days,” in which Mayer pleads, “I’m a good man with a good heart,” which is the sort of thing that normally doesn’t have to be pointed out for people if they already believe it.) It was by far the worst-selling release of his career, but musically, Mayer hasn’t backed away from that record’s ’70s SoCal freedom-rock vibe — Paradise Valley resembles Born and Raised in every way except its apologetic tone. While “I Will Be Found (Lost at Sea)” goes a little crazy on the alienation metaphors — he’s a runaway train, a bird in a tree, a loner on the highway — Paradise Valley at its best has the airy, ingratiating lightness that used to be Mayer’s brand. On the modest acoustic ballad “Dear Marie,” he’s lovesick and pining for an ex while trawling through photos on her Facebook page, which only sounds like a banal setup for a song because it’s so relatable.

If only Mayer weren’t still dealing with a faulty self-awareness switch. He should’ve been content to write the Taylor Swift dis track “Paper Doll” and treat it like a testy late-night e-mail that never gets past the drafts folder. Instead he put it on his record, and now lines like “you’re like 22 girls in one / and none of them know what they’re runnin’ from” will not only make him look petty and punitive, but will also diminish his songwriting in comparison with Swift’s superior “22.” And while it wasn’t a horrible idea to invite girlfriend Katy Perry to sing on “Who You Love” — even if it undermines the “it’s not about who you’re dating” narrative — allowing her to tease out a nauseating giggle at the end of the song is like putting a “Kick Me” sign on the back of your own album.

If Mayer is not yet precisely where he needs to be, he seems to be questing in the right direction. His recent concerts2 suggest that he’s taking tentative steps into full-blown jam band–dom, a canny maneuver for a musician who must appeal to more men to make up for the disillusioned female fans he has turned off. In this sense, Paradise Valley isn’t just a step back from civilization but also from what John Mayer once signified in the mainstream of pop music. In Rolling Stone, Mayer acknowledged that his declining record sales can’t only be blamed on his damaged image — even without the Playboy snafu, he has aged out of his “cute guy with a quarter-life crisis” period. “The music that was on the radio when I first came up in 2001 would never make it today. It was Norah Jones and Jack Johnson and Coldplay and me. It’s just different now,” he said, in a moment of fully recovered cognizance. On Paradise Valley, John Mayer is attempting to find a way to exist as a self-sufficient (and trendproof) entity outside of the old music-industry apparatus that sustained him, in a mystical hinterland where high school mascots are always familiar and the search for lost salt shakers never ends.

From Aidin Vaziri’s San Francisco Chronicle review in July: “The singer … appeared onstage wearing a safari vest and draping a patterned headband that Jimi Hendrix would have dismissed as too flamboyant. Behind him, there was a facade of a desert scene with dizzying lights flashing across it through the night. His band members, when not playing their organs and pedal steel guitars, milled around in floppy clothes like extras from a Lenny Kravitz video. The only thing missing was the peyote.”