To get a real feeling for the Indiana Pacers’ slow collapse over the past three months, the collapse that’s tormented their fans, the collapse that nearly ended their season, the collapse they may finally be figuring out how to reverse — to understand how they’ve confounded NBA analysts, how they’ve stranded themselves in a Sad Larry Bird–GIF minefield on Twitter, how they’ve looked like they were losing even when they’ve won — to really gauge the abjectness and dispiriting inside-out thoroughness of the Pacers’ late-season implosion, you have to look beyond basketball and into the world of nasty ^%&$ing gossip.

Speaking of the Hawks, basketball can tell you that they hurt Indiana in the regular season, too, blowing out the Pacers 107-88 on the latter’s home court in an April 6 game that saw Hibbert benched at halftime. But none of those numbers gets at what has made this team such a resounding bummer like one image from that game: Hibbert lurking by himself outside a second-half Pacers huddle, staring up at a King of the Hill skit on the JumboTron while coach Frank Vogel drew up a play.

Hibbert was watching "King of the Hill" promo while teammates focused in. Very, very poor body language from one of the "leaders" of this tm

And that’s why you need ^%&$ing gossip: Because what’s made this Indiana team so soul-chilling to watch isn’t just that they’ve been bad at basketball, that their perimeter spacing is terrible1 or their dribble penetration is weak2 or whatever. It’s also that they’ve looked like a squad in the middle of some cascading sequence of complex interpersonal meltdowns, as if the cast of a Dostoyevsky novel were suddenly tasked with defending the pick-and-roll. They’ve become not so much a team as the emotional environment in which Lance Stephenson and “a cursing, cut Evan Turner” have to be pulled apart in a practice-floor fistfight the day before the start of the playoffs. They’ve become the arena in which Hibbert and Paul George have loud postgame arguments in the locker room — and don’t stop when reporters come in. They’ve become a traveling context for awful, unfounded Internet rumors of the “George slept with Hibbert’s wife/girlfriend/fiancée/manicurist/sandwich artist” variety, rumors whose truth or falsehood matters less3 than the sheer fact that someone could look at this team and think Yup, that’s the most logical explanation. Obviously, fights and disagreements and personal issues flare up on good NBA teams, too. But when people watch you play basketball and go, “Huh … must be some catastrophic psychosexual backstory here,” you have some problems you should probably address. 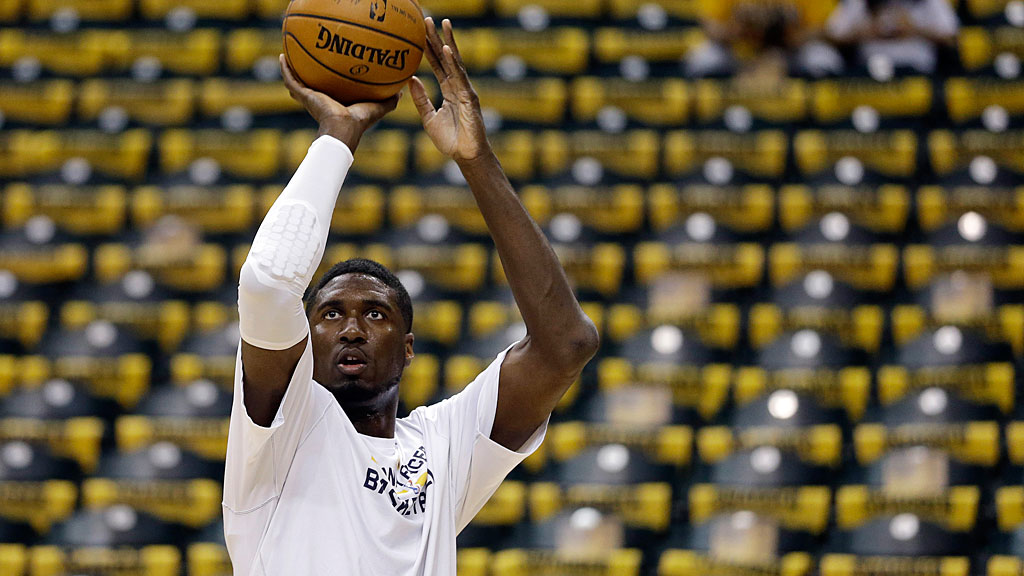 I felt deeply that any fans who could stare into this chasm and still want to cheer for it were my people, so I decided to fly to Indianapolis for Game 2 of the Pacers’ second-round series against the Wizards. To become one with the misery, so to speak. I like Pacers fans as a group. Indiana basketball culture is such a great, weird anomaly. Sports Illustrated once probed its “far-flung psychological and social effects,” and that was in 1955. How would the modern inheritors of those effects cope with watching their fun, young, up-and-coming team regress into a bunch of depressive bickerers? This season can’t have been an easy ride for the faithful. I was excited to get in there and join up with them, trade some hope, share some suffering.

As it turned out, the Pacers won Game 2 (more on this in a second), so the fans’ suffering was … maybe very slightly reduced. At one point, with 21 seconds left in the fourth, Stephenson drilled a 22-foot jump shot to put Indiana up 84-79, and a guy near my seat in the balcony started literally barking with happiness — and I don’t mean a stylized, Arsenio-woof-type bark, folks, I mean the sound of a Yorkie berserking on a mailman. A few seconds later, though, Washington’s Bradley Beal hit a 3-pointer, and the sound rushed out of the arena like air through a torn life raft. It wasn’t that the crowd didn’t believe. It was just that, well, they’d already been through so much. Every Wizards basket put them squarely in the headlights of a truck they’d been hit by before.

Rooting for a team like the Pacers is a special exercise in having your brain broken by loyalty. Root for a bad team long enough and you just get inured to it, but a disappointing team? A team that has talent, gets your hopes up, flirts with success, and then, due to some mystifying inner lack, self-dismantles just when it really matters? That’s a torch song. They’re too good for you to switch your feelings off, too unpredictable for you to ever feel safe, too successful for you to hide behind cynicism, too bent on failure for you not to know that your hope is a missile pointed at the moon. And for Pacers fans it’s twice as rough, because this team was the exact opposite of all this, like, six months ago. Remember when they took the Heat to seven games last year, how much fun Paul George was to watch? Remember David West looking basically alive? They’d gotten beyond a slow, painful rebuilding process that crippled attendance, moved past the Palace brawl, survived a series of medium-profile strip-club embarrassments and what you generally hear described as “run-ins with the law.” They were on their way. Larry Bird might have actually smiled (briefly, once). Then, poof.

You get into a groove, as a fan. You can’t ever count on the long-term future in sports, but you generally know what to expect from the very near term. If your guys are losers, it’s not like they can easily keep it a secret. But the Pacers’ sudden identity lurch forced their supporters to change grooves midseason, like a train jumping tracks. It’s no wonder Bankers Life Fieldhouse was tense Wednesday night.

I’m not even talking about obvious signs of panic, just little things, hints that the far-reaching psychological and social effects were not 100 percent healthy at this juncture. Two elevator operators talking about how Delonte West might have slept with LeBron’s mom in Cleveland: only one reason that comes up. A little extra half-step of horror in the screams when it seemed like Luis Scola might not be able to make an inbounds pass at the end. A sense of 10,000 sets of teeth being clenched whenever John Wall attempted a 3. That sort of thing.

But they got through it. I’m not saying every seat in the arena was filled, I’m not saying they never fell back on “Seven Nation Army” to keep themselves going, but they made a big noise. By early in the third quarter, with Hibbert well on his way to a monster 28-point, nine-rebound, two-block night, there was already a giant Hibbert head bobbing in the stands with an “I’m Back” speech bubble affixed to it; you felt like the fans meant it for themselves, too. Hibbert wound up with five more points than the total from his last six games combined. Even if they never looked comfortable, the Pacers never trailed over the final four minutes, and even if they never felt confident, the Indiana crowd never stopped screaming “De-FENSE!” like people who really, really wanted to see some defense. I had come to share their suffering, like a vampire, and I wound up sharing their relief and happiness, also like a vampire, but a vampire who is glad to be there and having a much better time. 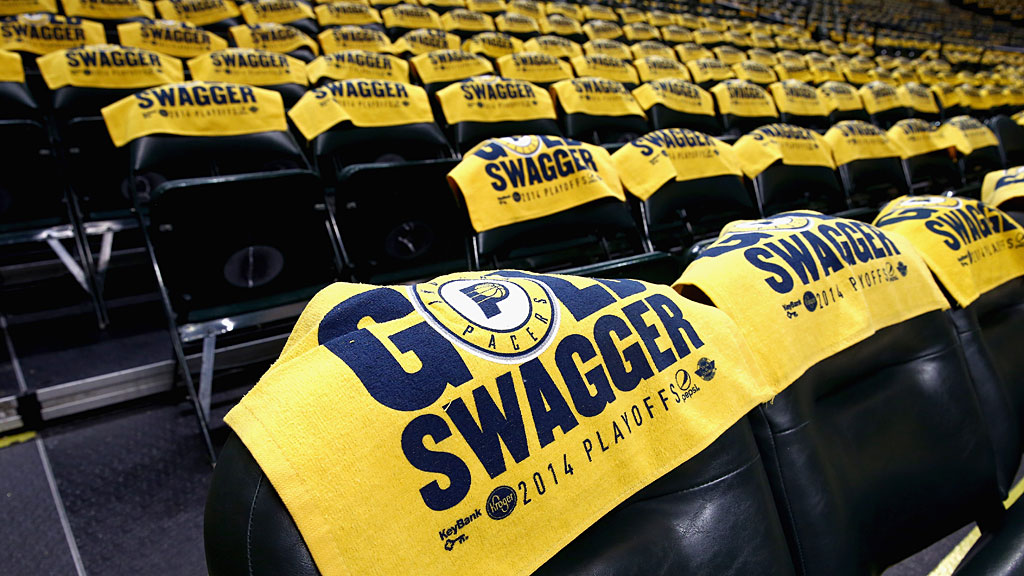 So are the Pacers back? That this is even a question probably illustrates the extent of their decline more than their possible redemption. I mean, hanging on to win by four at home against the Wizards would not have seemed like a power move for this team in December. The Pacers’ strength has never been their offense, but there was a lot of shuffling around Wednesday night, a lot of waiting for Roy or Lance to take matters into their own hands. (The Pacers’ offense sometimes looks like it’s been recently deputized in a western movie — definitely down for the vengeance posse, just not sure where to stand when the shooting starts.) If Hibbert stays awake, I can see this group winning three more against the Wizards, but the Heat? It’s a stretch.

That said, thinking about the Heat right now is pointless.4 For now, beating the Wizards is the reasonable test.

Although tell that to the guy selling “FUCK LEBRON” shirts outside the stadium after the game, warmly hugging everyone who bought one — not that I would know from personal experience, he said, hiding his chest.

Wednesday night, Hibbert explained his resurgence by saying George had taken him fishing the day before. “We fished for about two hours and just relaxed and didn’t talk about basketball,” Hibbert said. (You’ve maybe seen this; it’s, uh, been mentioned in the sports news.) “We just talked about life and trying to catch some bass.” So you know, just life, and maybe some bass: This makes absolutely no sense, in basketball terms, as a season-saving moment of transformation. But nothing about the Pacers’ collapse ever made sense, so maybe it’s appropriate that their salvation would come in the form of a random Norman Maclean hit.5 Sports doesn’t make sense, and neither does sports fandom, but fishing with friends is a chill way to spend a couple of hours. Let’s gossip about that.

Eventually, all things merge into one, and Danny Granger runs through it.