Tuesday, we introduced a metric to try and gauge what sort of return each NFL draft pick provided to their respective teams during their rookie contracts. The unnamed concept has its strengths (ability to compare players at different positions to similarly pedigreed players) and weaknesses (an inability to separate poor performance from injury and a bias against successful teams that leave their young players on the bench). While our look at individual success and failures in that piece ended up identifying a number of poor picks whose sole crime was getting injured, the methodology we introduced in that piece should be much more valuable in analyzing draft trends and relative values over a number of years. That’s what we’re going to do today.

We’re going to attack two common draft questions using this methodology. Our findings won’t make the answers crystal clear, but they’ll be steps in the right direction and things to keep in mind when you watch the parade of draftees during this week’s upcoming gala. In addition to what the numbers suggest, we’ll also try and point out the weaknesses and aspects of performance that aren’t properly being weighted as we go along.

Question 1: Which is the safest position to go after early in the draft?

What this question is essentially asking is, “At which position am I least likely to draft a bust?” The traditional answer to this problem was “Draft an offensive lineman,” but there are enough anecdotal examples against that argument (Tony Mandarich, Mike Williams, and Jason Smith come to mind) to rule it out as a foolproof answer. This is exactly the sort of question our little bunch of calculations can go after.

First, we need to define “early in the draft.” Let’s define that as the first two rounds. Then, using the value measurement system in our article from Tuesday, we’ll categorize those players who produced fewer than 40 points of value during their first five years in the league as “busts.” That seems like a reasonable definition, as a player who made it through all five seasons under our study without ever starting a game would be directly on the line between bust and acceptable value. By this definition, most players who fail to turn into starters by the end of their fourth seasons will be considered busts.

The chart below compares each position’s output of producing a draft success (blue) or a draft bust (red) from 1996 through 2007: 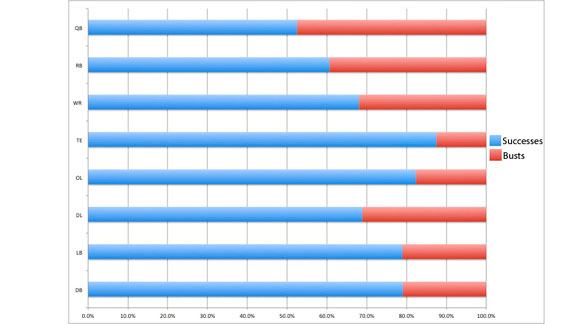 As it turns out, tight end is the position where teams are least likely to end up drafting a lemon during the first two rounds of the draft. In all, NFL organizations selected 32 tight ends during those opening two rounds from 1997-2007, and only four of them were eventual busts: Bennie Joppru, whom we mentioned yesterday, is joined in this group by Kansas City’s Kris Wilson, Bears tight end John Allred, and Saints tight end Cam Cleeland, who had one fantastic season before suffering from a run of debilitating injuries. Offensive line is the second-most-reliable place to avoid busts, finishing just ahead of linebackers and defensive backs.

Quarterbacks are listed as having the most frequent bust rate, but remember that they also are brought into the league at a much slower pace than players at any other position and almost never play without an injury to the established starter. (They can also be kick holders.) Players at other positions are infinitely more likely to come in for a play or two as a substitute or serve as warm bodies on special teams, options unavailable to the quarterback. There’s obviously not much difference in impact between a backup linebacker who suits up for kickoff duty four times and a backup quarterback holding a clipboard all game, but our system says that one played a game (and earned a half-point against that bust recognition) and the other one did not. That’s an unfair way to judge quarterbacks. If we remove signal-callers from the equation, our old favorites — running backs — represent the position most likely to result in a wasted pick.

Question 2: Which position is it most important to draft early? Where is it easier to find sleepers later in the draft?

The obvious answer to the first half of this question is “quarterback,” but since the vast majority of the league’s teams won’t be concerning themselves with a quarterback in the first round in a given year’s draft, we probably need to figure out the value curve for players at other positions, too. It’s not enough to know that we can get Trent Richardson early in the first round; in order to make an informed decision, we need to know whether we would be better off drafting Trent Richardson and an offensive tackle in the second round, or if we’re likely to get more value out of taking Matt Kalil before adding a running back in the subsequent round. If our research suggests that the likely difference in output between Richardson and a second-round back is relatively small, we’ll have a flat value curve and a clear indication that we’re better off paying a premium for an offensive tackle as opposed to a halfback.

All we’re measuring here is the average number of “points” produced over their first five seasons by players at each position taken in each round of the draft from 1997-2007. Let’s start by looking at the value curve for offensive players over that time frame.

What this tells us is how the relative value of a player taken in a given round compared to the value produced by a first-rounder at the same position. So, as an example, let’s work with wide receivers. A second-round pick at wideout produces 84 percent of the value that the average first-round pick at the same position produces, which is the highest retaining rate for players at any spot on the field. We can see that in the relatively flat curve for wideouts taken over the first two rounds in the chart above. Remember that stars like Greg Jennings, Vincent Jackson, Anquan Boldin, and Chad Ochocinco were taken in the second round and quickly became key players in their respective offenses. It’s no surprise that we see the second-round wideout as a wise move.

However, once the second round passes, the value provided by wide receivers falls off a cliff. Outside of Steve Smith and Hines Ward, there’s just not much in the way of impact wideouts coming off the board from the draft’s third round. That average third-round wideout produces just 54 percent of the return that a first-rounder would provide, and that figure falls to 48 percent for fourth-rounders. And even if we compare those fourth-rounders to the wideouts who were selected in the second round, they’re only able to produce 58 percent of the second-rounders’ value. What this chart tells us about drafting wide receivers is that the sweet spot for finding them is in the second round. Offensive linemen present a very similar value curve, while our research also suggests that a fourth-round back will produce about 70 percent of the output created by an average second-rounder.

Now let’s do the same thing for defense.

The value curves for wide receivers and defensive backs are virtually identical, interesting considering their similar body types and profiles for size, athleticism, and temperament. Like wide receivers, defensive backs taken in the second round retain virtually all of the value from DBs taken in the first round, but they get paid a fraction of the cost on draft day. That little piece of information isn’t enough to pass on a cornerback like Patrick Peterson on draft day, but it’s enough to make other positions seem far more valuable. If you don’t get a cornerback in the second round, though, you’re probably better off passing altogether. That’s not the case with players in the front seven, where non-first-rounders tend to struggle relative to those elite mixes of size and athleticism.

The other bias built in here, of course, is that players who get selected in the first round are more likely to get playing time at the beginning of their careers than players selected in the later rounds, who have to prove themselves in practice and/or wait for a key injury to occur.