On Monday in this space, we discussed the failures of NBC’s new sitcom “Inside Schwartz,” explained the “Curse of Coolidge” and wondered why it’s easier to create a 35-inch television from scratch than it is to create an entertaining TV show that relates to sports.

But maybe the question isn’t “Why?” but “How?” In other words, how can the TV industry make this work?

First, a quick recap: Over the past two decades, Hollywood churned out quality dramas about police departments (“NYPD Blue,” “Miami Vice,” “Homicide,” “Hill Street Blues”), law offices (“L.A. Law,” “The Practice”), courts (“Law & Order”), hospitals (“ER,” “Chicago Hope,” “St. Elsewhere”), newspapers (“Lou Grant”), government (“The West Wing”), prisons (“Oz”), forensic science (“CSI”) … and those are just the shows I remember off the top of my head. Yet there wasn’t one quality sports show over this time? How was this possible?

One of my editors (J-Lov, no relation to J-Lo) sent me the following explanation:

“To me, the problem with making sports TV that works has to do with the difference between sports drama and emotional drama, and our expectations for each. Sports drama is unscripted, and that’s what we like about it. Emotional drama is tightly controlled — good emotional drama, that is — while seeming completely natural (at the same time). There is no rational reason why the two don’t work together — other than the subliminal differences in our expectations — but they just don’t.”

Interesting answer. And it almost roped me in, except for one thing: it doesn’t explain why we love sports movies so much.

Why will I watch the last 15 minutes of “The Natural” twice in the same week on Cinemax 2 when I’ve already seen the movie roughly 255,034 times and I already own it on DVD? How does that make sense? Clearly there’s another dynamic going on here. Maybe we enjoy sports movies because we can control the endings. Maybe the heroics of Hickory High, the New York Knights, the Mean Machine and everyone else seem safer than the constant pitfalls and disappointments of the real-life sports scene; even if we already know the endings, at least they’re good endings, right?

I would argue that we’re ready for another well-done TV show that happens to be about sports … it just hasn’t happened yet. Why not? Because it’s easier to make a sports movies work; they rely on dramatic arcs (a conflict that gets resolved within two hours), whereas TV shows have smaller arcs and tend to be more character-driven. And it’s obviously difficult to create characters that can remain interesting over the long haul, regardless of the genre.

But that doesn’t mean it’s impossible. For instance, “The White Shadow” was revered during its all-too-brief, Koufax-esque run in the late-70’s. (If you don’t believe me, ESPN Classic re-runs “Shadow” at 10 o’clock every morning and the episodes from the first two seasons still hold up; tragically, some of the best episodes are MIA because the original tapes are missing, which damn near kills me, but that’s a story for another time.) “Shadow” was a groundbreaking television show with memorable characters … it just happened to be about a high school basketball team. And that’s the key here.

Here’s the list of sports-related shows that Hollywood cranked out since “Shadow” was cancelled in 1981. And trust me, if I’m inadvertently leaving something out here, it’s probably for a good reason.

1. “Bay City Blues” (1983)
Intriguing project from Stephen Bochco (who created “Hill Street Blues,” “NYPD Blue” and the legendary “Cop Rock”) about the travails of a minor-league baseball team … future “NYPD Blue” star Dennis Franz played the manager … future “Flashdance” star (and That Guy) Michael Nouri played the star player … according to www.imdb.com, Sharon Stone was a supporting player … Bochco was scorching-hot at that point because of “Hill Street Blues,” yet “Bay City” lasted just four episodes … your guess is as good as mine.

HBO’s first comedy, which starred a slender, sultry Delta Burke as the owner of the California Bulls (a fictional L.A. football team) … thoroughly forgettable, totally inane, and yet it lasted an astounding seven seasons … every teenager from the mid-’80s holds a soft spot for this show (because of HBO’s mandate that every episode had to feature an obligatory nude scene) … they used USFL game footage for every episode … the cast included Shannon Tweed, Marcus Allen, Ogre from “Revenge of the Nerds” and O.J. Simpson (sending the Unintentional Comedy Ratiing through the roof if HBO ever wises up and starts re-running the show) … you know, even though “1st & Ten” ended up getting cancelled, it was only because O.J. loved it too much.

3. “Coach” (1989-1997)
Lightweight sitcom starring Craig T. Nelson as a college football coach in Minnesota … the most successful sports-related show of all-time (lasting an astounding eight seasons) … I never thought this show brought anything to the table, but it didn’t take anything off the table, either … put it this way: People aren’t exactly trading videotapes of “Coach” on eBay.

(Note: I still haven’t forgiven Nelson for not having Rifleman take a safety at the end of the big game in “All The Right Moves.” Inexcusable. He never should have gotten his own TV show after that.)

6. “Sports Night” (1998-2000)
Dramedy about a “SportsCenter”-type show from Aaron Sorkin … critically acclaimed, rarely watched … Comedy Channel bought the re-runs and promoted them endlessly (nobody’s watching them, either) … strange show: It was sports-oriented enough that it probably turned off most non-sports fans, yet it wasn’t sports-oriented enough and/or realistic enough for most diehard sports fans … the kid from “Dead Poets Society” always seemed overmatched as one of the Dan Patrick-types (you kept waiting for him to start stalking a boarding school student and recite poetry) … one mitigating factor: A small population of fans out there absolutely loved this show (I just don’t know any of them). 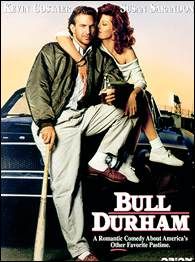 Showtime’s ill-fated vehicle about a pro hoops team … Mykelti Williamson (Bubba from “Forrest Gump”) played the star and Dan Lauria (Kevin’s Dad from the “Wonder Years”) played the coach … you kept waiting for Mykelti to drop his lower lip and start talking about shrimp … exhibited a hint of potential for the first few episodes … hampered by poor casting, an obviously meager budget and no NBA affiliation (they were forced to rely on the “darkened arena/constant close-ups/slow motion/quick edits” routine, always a disaster).

There’s one simple way to approach the “What would make a good sports-related TV show?” question: What if we examined specific sports movies that worked over the past 10-15 years, then imagined that Sports Movie X had instead been transformed into a TV series? With savvy casting, a workable budget and the proper creative forces behind the scenes, would the idea have worked on television?

Three mitigating factors before we begin: