Smart people will disagree on the most Drake-like moment perpetrated by Drake on the Toronto rapper’s third studio album, Nothing Was the Same.1 Me, I’m going with “Too Much,” the doleful soul-laced ballad he debuted last Friday on Late Night With Jimmy Fallon. Subjects broached in “Too Much” include: Drake’s sick mother and her inability to heed Drake’s texts; Paul Wall, Bun B, and the significance of the Houston rap scene in Drake’s origin story; Drake’s uncle Larry Graham and his unacceptable attitude about following his dreams; and Drake’s dual status as a dreamer and a believer (which naturally compounds his angst about his uncle, as nobody leaves dreams unattended on Drake’s watch).

It comes out September 24, though the record leaked online over the weekend and has already been heard by many of the people who care even a little about it.

Toward the end of the first verse, Drake demonstrates why he is the defining rapper of Generation Y. After requesting a back rub from his “main thing,” he tells said thing that when he started out nobody wanted him. Now he expects his new record to move a million units in its first week. He started from the bottom and now he’s here, only it’s not what he expected. “Take a deep breath,” she replies. “You’re too worried about being the best out.”

All of the Drake-iest qualities are represented on “Too Much”: the oversharing of familial dirty laundry, the preoccupation with parsing his own (not too distant) past, the self-confidence disguised as self-doubt and self-doubt disguised as self-confidence, and the strident Y-ish striving. The influence of social media is palpable: In “Too Much,” Drake simultaneously presents a façade that he knows is not entirely accurate while also acknowledging that this façade is not entirely accurate. (I’m referring to the meta reference to Drake’s best-related stress, which, along with phenomena like “yacht envy” and “16-bedroom château guilt,” is experienced by only the truly megalomaniacal.) He undercuts this bravado by talking openly about his problems, but he’s not fully attached to this identity, either. The “real” Drake is situated somewhere between a self-consciously constructed and self-aware avatar and the handpicked highlights of interpersonal drama he has chosen to share with strangers.

This is the language of tweets, Tumblr posts, and Facebook timelines — the lingua franca of a generation. Drake understands this language intuitively, and Nothing Was the Same will be most appreciated by those who speak it fluently.

For an album that is expected to position Drake as the top rapper in the game, Nothing Was the Same is highly unusual, if not somewhat perverse. This is to say it’s precisely the sort of unexpected left turn that has come to be expected from this black Jewish-Canadian ex–child actor turned MC–slash–semi-competent singer. Like 2011’s Take Care, a nocturnal 70-minute mood poem that ranks as one of the most popular and critically respected rap records of the last few years, Nothing Was the Same offers little in the way of obvious singles. (The two catchiest tracks, the stalking “Started From the Bottom” and sinewy “Hold On, We’re Going Home,” were dispatched from the record months in advance.) But Take Care was more varied in its sonic approach and imbued with a seductive musical sophistication that drew in neophytes turned off by Drake’s relatively pedestrian radio hits. While Same is similarly constructed as a self-contained, multi-track statement — thoughts left hanging at the end of one song are picked up and expounded upon on the next song — it doesn’t have an easy entry point like “Headlines” or “Take Care” that will attract new fans. If Take Care didn’t win you over, Nothing Was the Same will seem oppressively opaque.

It might even be a little much for Take Care fans. Musically, Same is practically a Bon Iver record. Working once again with his primary collaborator, Noah “40” Shebib — whose spare, existential soundscapes are as essential to the Drake persona as sweaters and Degrassi — Drake has fashioned Nothing Was the Same into a desolate and deliberately paced listening experience that’s a little soft rock even by his well-established softness standards. (“I want to take it deeper than money, pussy, vacation / and influence a generation that’s lacking in patience,” he explains on “From Time,” because Drake is edutainment.) That’s not necessarily a criticism, since Drake comes off at his most ridiculous when he attempts traditional macho posturing instead of subverting it. (Like on “Worst Behaviour,” where Drake awkwardly engages in tough-guy talk like, “bitch, you better have my money when I come for that shit like O.D.B.” This sort of thing just doesn’t sound right coming from a guy who spells “behavior” with a u.)

When Drake sticks to more familiar subject matter — his conflicted feelings about women, how they make him feel, and how he feels about how they make him feel — he can be a penetrating lyricist. One of my favorite lines comes from the song “Connect”: “She used to say, ‘You can be whoever you want, even yourself’ / yeah I show up / knowin’ exactly who I was and never leave as myself.” That’s just excellent first-person reportage from the front lines of a toxic relationship.

Drake’s admiration of Marvin Gaye, particularly Gaye’s brilliant 1978 “divorce” album Here, My Dear, inspired Drake to record parts of Nothing Was the Same at Gaye’s L.A. studio, though he mostly eschews the lush, self-lacerating prog-soul epics that Gaye favored. Instead, Drake prefers self-lacerating starkness — he raps over quiet undulating synths or tinkling pianos, the occasional sped-up vocal sample (like the chipmunk version of Whitney Houston on the album-opening “Tuscan Leather”), and skittering, hollowed-out beats. With the instrumentation pared back to a minimum, the songs zoom in on Drake’s mug nearly as close as that goofy-ass cover painting does.

Nothing Was the Same enters a hip-hop scene that has never seemed more insular than it does in 2013. Following the rap vanguard requires serious work these days — the deluge of mixtapes and “leaked” remixes is exciting and a little daunting for the non-aesthete. The best young rappers lately tend to go for the obscure and idiosyncratic, though many do cave to the allure of pop stardom eventually. Drake used to be at the forefront of this vanguard — his epochal 2009 mixtape So Far Gone set him apart as a post–808s and Heartbreak stylist who was boldly taking the genre into fresh thematic territory. Four years later, Drake is more likely to be compared with rap’s reigning warrior kings — Jay Z and Kanye West — than the contemporaries he has toured and collaborated with, like Kendrick Lamar, A$AP Rocky, and Future.

As the third and final piece in a trilogy of 2013 blockbuster rap releases, Nothing Was the Same is the most forward-looking in terms of what it means in the context of Drake’s career as he assumes the center of mainstream hip-hop. It’s the “just right” option after Drake’s predecessors served up albums that were a little too hot and a little too cold to be entirely satisfying for a pop audience. Unlike Kanye, Drake is palatable for mass consumption. When Kanye describes a drunken late-night hookup on Yeezus‘s “Hold My Liquor,” it’s presented as a lonely journey into post-hedonistic hell; when Drake describes a similar scenario in “Connect,” he merely sounds a little freaked out about being a single guy who’s turning 27 next month and wants to find the right girl in order to get over his quarter-life crisis already. 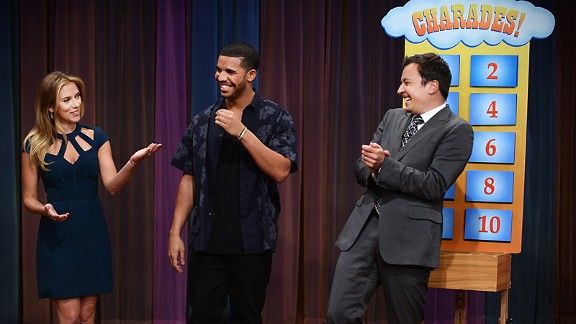 Watching Drake play charades with ScarJo on Fallon was a reminder that he has been trained to be in the public eye since he was a teenager. On Nothing Was the Same, he’s depressed but not tortured, confused but not troubled, and resentful but not angry — he’s basically a nice, sensible dude who will eventually grow out of hanging out in strip clubs and falling in love with Hooters employees named Courtney.

This is because — unlike Jay — Drake has evolved into rap’s great populist. Relatability is his franchise. It’s an illusion, of course: Drake’s Club Paradise tour was the most successful hip-hop tour of 2012, raking in more than $42 million, and Nothing Was the Same will surely rank among the most successful rap records of the year. But outside of the boast about “gettin’ 20 million off the record” at the start of “Tuscan Leather,” Drake keeps the money talk to a minimum on Nothing Was the Same. Again, his knowledge of pop celebrity mechanics in the social-media age is instinctive — he gets that the public ultimately prefers the fantasy of accessibility to the fantasy of sequestered opulence.

The distance between Yeezus and Magna Carta Holy Grail and Nothing Was the Same is indicative of a larger generation gap in rap specifically and pop generally. Some aging rapheads still have trouble comprehending Drake — Inspectah Deck was among the old-schoolers who were flummoxed by Drake titling one of the more thoughtful tracks on Same “Wu-Tang Forever,” after the group’s 1997 album. But the kids understand: Drake wasn’t referencing Wu-Tang Forever as a descriptor but rather as a touchstone of his childhood. Same is littered with similar ’90s-baby signifiers, including In Living Color, Keith Sweat, and The Fresh Prince of Bel-Air. He’s discussing pop culture in a way that has become overly familiar on the Internet — as a means to mourn his own loss of innocence.

Fully realized if only intermittently engaging, Nothing Was the Same feels like a transitional record, catching Drake as he exits the “young turk” chapter of his career and enters a more rarefied stratum. He doesn’t sound like he fully belongs yet. The Jay Z duet “Pound Cake/Paris Morton Music 2” has been designed as a “passing the torch” exercise, but it diminishes both parties — Jay says, “I had Benzes ‘fore you had braces,” and he sounds like he’s 86 and addressing a teenage Dairy Queen employee. It’s as if Jay now belongs to a bygone era of rap superstars. When he raps “my jet don’t lag,” Drake muses that “my high school reunion might be worth an appearance / make everybody go through security clearance.” I think I know which status will get the most likes.