The term in Argentina is villa miseria, which gets the idea across.

Maradona wouldn’t net his first senior international goal for Argentina till 1979, in a match against Scotland at Hampden Park.

This is why no one knows exactly how many goals Pele scored. It’s like tracking down obscure pseudonymous Charlie Parker tracks from the musician’s-strike era; there’s no absolutely reliable record.

Which Argentina won anyway, though with maybe a third of an asterisk — they were the hosts, Johan Cruyff didn’t play, and there was some intimidation of the Dutch team before the match, though how much and whether it influenced anything is a matter of disagreement.

“A judge has obliged me to pay support, but that does not obligate me to feel love for him,” is a set of words Maradona actually said.

Via the Guardian: “‘What an asshole you are,’ Maradona shouted from the car. ‘How can you put your leg there where it can get run over, man?’”

Actually, Maradona has a history of pope-bashing, and it’s pretty glorious. He once accused John Paul II of a “total lack of respect” because the pope gave him a rosary that wasn’t sufficiently distinct from the rosaries the pope gave everyone else that day. Then there’s this, from one of his autobiographies: “So yes, I fell out with the Pope. I went to the Vatican and saw that the ceilings were made of gold. And I heard the Pope saying that the church takes care of poor children, but if so, sell the ceiling, tiger. Do something!” 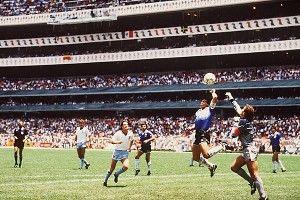