Here’s one of those things that is cute about the Ivy League: Each school has a partner. This means that during the basketball season, a team goes on the road and plays a game Friday night, and then faces its opponent’s partner school on Saturday night; always the same two teams in tandem, since the dawn of trust funds. This being the Ivy League, all of the traveling is done by bus through the upper latitudes in winter. By popular acclaim, the worst road trip in the Ivy League is Columbia-Cornell, which requires a team to go from New York City to Ithaca, or vice versa, through the dark of a winter’s night. The second-worst is Harvard-Dartmouth.

What used to make up for the vast inconveniences of this annual tour of the Northeast’s finer highway rest areas was that the Harvard-Dartmouth swing provided the league’s traditional basketball powers, Penn and Princeton, with two guaranteed wins every year. (The dominance of those programs has been helped immeasurably by the fact that they are partners. In the Ivy League, the Penn-Princeton trip used to be a weekend in Mordor.) This is no longer the case. Over the weekend, Harvard solidified its place atop the Ivy League standings, squashing both of the visitors, each of whom also lost at Dartmouth because, what the hell, it’s the Ivy League. By far, Princeton was the tougher out. Penn had to get on a bus after losing to the Big Green, and the Quakers obviously left their legs, and most of their want-to, somewhere up Interstate 89 outside White River Junction. Over the last 11 minutes of the first half on Saturday night, Harvard outscored Penn 29-5 and rollicked and frolicked to an 80-50 win. In the Ivy League, and especially at Harvard, this is why everybody talks about the importance of Saturday night. Saturday night is how you win the league, and get to go to the NCAA tournament, and beat New Mexico, and make thousands of people in sports bars have the Scooby-Doo moment when the score comes across the crawl, and cause thousands of pool sheets to be thrown in the air. That’s what Saturday night in February is. Saturday night in February is when Thursday night in March starts.

“I was happy because we worked in practice about being good and up and ready for both nights,” said Harvard coach Tommy Amaker. “We made it a point in practice to emphasize how difficult it can be to play two nights in a row, especially that second night. That’s what we say — you win the league on Saturday night.”

If a team could win a whole league by the way it plays a single game, then Harvard could claim the Ivy title just with the ease by which it dispatched Penn. The Quakers are a better team than their 4-13 record would indicate, but they play with all the cool, disciplined focus of a food riot. The night before, Princeton made Harvard earn every last second of its 82-76 win; Penn, however, simply wilted the first time the Crimson cranked up the volume, which Harvard can do in very entertaining fashion. Having lost its true inside presence, Kenyatta Smith, for the season with a foot injury, Harvard continues to play fast and smart and very confidently, the last of which is personified best by Laurent Rivard, a 6-foot-5 guard from Saint-Bruno in Quebec, who can (and will) put it in the air from the Plains of Abraham if necessary. It was Rivard, whom Godard would have cast on sight, who put five 3-pointers on New Mexico in the tournament last year, who scored a combined 40 points on 11-for-19 from the floor in the weekend’s two games. Most of these came from spot-ups in transition, including a pair of 3-point shots that he hit in the nine minutes when the Penn game became ridiculous. “Laurent is a marksman,” Amaker said. “He’s that good a jump-shooter that he can change the dynamics of our team over a weekend. Now, he’s pretty much got the green light.”

“We have the machine going this year … so, if we have to play without Kenyatta, we have other players to go to without him,” Rivard said Friday night. “Coach always says this league is won on Saturday nights. If we win tomorrow, we’re on top alone. If we lose, we’re just back in the mix.” 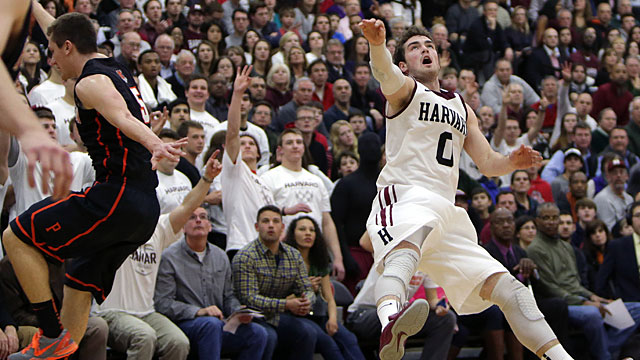 Here are two stories about Harvard basketball that come from the days in which it did not beat Princeton and Penn on consecutive nights, and did not beat New Mexico in NCAA tournament games. The first comes from the early 1970s, when the school (briefly) attempted to bring its basketball team into the second half of the 20th century by recruiting actual basketball players. One of them was a star out of DeMatha Catholic High School, the longtime NBA prospect factory in Washington, D.C., named James Brown, whom you may see now on weekends in the fall, wrangling the NFL Today panel on CBS. Alas, Harvard was putting big-time talent in a small-time show. The Crimson still played up three flights in the old Indoor Athletic Building, in a big gym with arched windows that looked like the place where they trained the Lipizzaner stallions. Anyway, in 1973, Brown’s senior year, the Crimson went 0-4 against Penn and Princeton, home and away, and that was pretty much that.

Six years later, the Harvard cocaptain was a tough point guard from Philadelphia named Glenn Fine. One night in December, 13-point underdogs against Boston College in the old Boston Garden, Fine and the Crimson played out of their shoes, taking a vastly more talented BC team to the wire before losing, 86-83. This game later became famous as one that Boston College players were dumping on behalf of Henry Hill and his friends in New York, who later became famous in the movie Goodfellas. Afterward, when nobody still knew anything about anything, and the BC players were collecting their money, Glenn Fine got a phone call telling him he’d been awarded a Rhodes Scholarship. Even though Harvard basketball doesn’t have a history, it still has history, because that’s the way things roll on that side of the Charles.

“I think anybody who’s been a part of this institution, or been around it, you’re in awe of it at times, because of the tradition, how far the arms can reach from this place,” said Amaker, who has spent his entire career in the service of high-end brands. He was a vital part of Mike Krzyzewski’s first great teams at Duke. Then, in 2001, after coaching at Seton Hall for four seasons, he moved along to Michigan, where the program was dead in the middle of the penalties levied as a result of the scandal that had its roots in the Fab Five days of the early 1990s. Amaker never really got his feet under him. He coached the Wolverines for six years and never made the tournament. Even if you’ve been spending time in NCAA supermax, that is how you lose your job at major programs. In 2007, then, Amaker signed aboard the oldest top-level brand in American higher education.

“You find out that, or you feel like, anything’s possible here,” he said. “We don’t sell, we present Harvard. We think it’s a life-changing opportunity … At times, it’s been magical, and not just here in the States, but globally. We built the program around that.”

He has also taken marvelous advantage of the inherent geopolitical advantages of a Harvard degree. In addition to Rivard, the gunner from La Belle Province, Amaker’s roster includes two other Canadians and a forward from Cameroon. “Because of the power of the brand, Harvard is used to greatness. The part that moves me the most about being here is that our basketball program, the energy and the excitement we’ve had, has energized our school,” Amaker said.

They run and they gun and they have fun, and they’re not going to sneak up on anyone this spring. This probably will not be a good thing for Harvard, which won the weekend. You win on Saturday night because you win the league on Saturday nights. You win in February to play in March, especially in the Ivy League, which gets one bid to the tournament forever. You set yourself a number of little goals so as to reach one big one. “We beat Penn by 30,” said Kyle Casey, the merry 6-foot-7 center from down the highway in Medway, Massachusetts, who likely will carry most of the load inside the rest of the way. “I don’t think any Harvard team’s ever beaten Penn by 30. We’re the first one and, you know, it’s hard to do anything for the first time at Harvard.”