Editor’s note: This column appears in the October 22 issue of ESPN The Magazine.

When LeBron James showed up at Game 1 of the Yankees-Indians series, nobody was too surprised. It’s not like he’s strayed from the limelight since the Finals ended, hosting both the ESPYs and SNL. For all we know, he might be working on
a couple of horrible rap albums and a buddy-cop movie right now. Heck, when the game’s announcers threw it to Craig Sager, I half-expected Bron-Bron to plug an upcoming appearance on Frank TV.

Here’s what I didn’t expect: LeBron wearing a Yankees hat.

That’s right, the most important Cleveland athlete since Jim Brown wore enemy colors to Jacobs Field. This was more shocking than a videotape of Al Gore throwing a bunch of plastic bottles into the nonrecyclables bin could ever be. An outraged Sager started
off the interview like Lt. Daniel Kaffee gunning for the Code Red, basically asking, “What the hell?” LeBron calmly explained that he grew up a Yankee fan and had to support his team but that he was rooting for the Indians as individuals. Sager
wondered why an Ohio native would root for the Yanks, Cowboys and Bulls, asking, “Are you a front-runner?” Poor LeBron never answered directly, suddenly looking more rattled than Mark Fuhrman during the O.J. trial. That’s when Sager handed LeBron a gift from C.C. Sabathia (an Indians towel) before wrapping it up, probably so
he could rush off to take a congratulatory
call from Jim Gray. 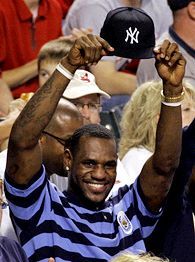 My initial conclusion was this: Because the Cavaliers haven’t yet signed Anderson Varejao or Sasha Pavlovic, the hat was LeBron’s way of telling his front office, “Thanks for sticking me with another lousy supporting cast. I’m signing with the Knicks in three years.” But over the weekend, after watching the interview
a few more times, I came to
another conclusion. LeBron was wearing that hat for
a more genuine reason:
He really is a fan. His body language backed it up. He didn’t feel great about doing it and knew he’d take heat for it, but he loves the Yanks and wanted to show his support. Case closed.

Well, LeBron did take a ton of heat. The following day, Sager’s interview got more attention than the game did. National message boards and blogs buzzed, local sports radio shows painted him as a pariah. The AP even filed a wire story about it. Now, had LeBron worn a Yankees cap and an Indians jersey — making his dueling loyalties clear, even if he didn’t feel it — everything would have been fine, kind of like Michael Jordan wearing a Nike shirt and a Kangol cap.

And that’s the real point here. The angle everyone missed is that for once, a high-profile athlete didn’t care what everyone else thought about him. These days, superstars are like political candidates with a dash
of CEO tossed in: With so many people advising them and so many sponsors
paying them, they’re not about to take controversial stances on anything.

It’s a sharp contrast from the 1960s and ’70s, when Muhammad Ali, Bill Russell, Bill Walton and Jim Brown rose above the games
to join fights against racial
inequality or the Vietnam War, even though such beliefs were threatening to some of their “fans.” Then Jordan came along
and proved it was more lucrative to avoid opinions at all costs, talking about only basketball, golf and the products he
endorsed. With his playing days well behind him, he’d still rather goof around with Kevin Bacon in homoerotic underwear ads than speak out against the Iraq War, AIDS in Africa or whatever else. When his Jordan Brand donated $450,000 to Habitat for Humanity after Hurricane Katrina, it was a rare indication that the greatest pro athlete of the past 25 years cared about something other than splitting aces.

Okay, wearing a Yankees cap and antagonizing a city isn’t quite the same as aiding flood survivors or speaking out on Darfur,
as LeBron had a chance to do when he was presented with a
petition to sign last spring. But
the way pro sports is, that cap is the closest we’ve had to a defiant act of expression in a while. How many athletes stick to their guns about anything, even something as innocent as who they root for?

Charles Barkley and Gilbert Arenas speak their minds, and we love them. Allen Iverson made
people respect him on his own terms. But not many other athletes jump to my mind. Some — such as Gary Sheffield, for instance — are abused for their ideas, surely
scaring away others who might have something to say. We end
up not knowing most of the guys except as they appear in scripted commercials and controlled interviews. When Peter King touts Peyton Manning’s human virtues, we just have to take his word for it.

If Bill Walton’s hair and pot smoking personified sports in the early ’70s, LeBron personifies the current climate: We first learned about him in high school, hyped him before he did a single thing, then made him rich before he’d earned it. He was a blank slate who happened to be great at sports, and that made him a natural to become a corporation. None of it is his fault exactly. Behind the scenes, he’s supposedly a happy chops-buster who brings his buddies with him everywhere, a real-life Vinnie Chase, the kind of guy who builds a gigantic house and makes sure it includes a casino.

The average person wouldn’t know any of this. They know him only from his playing exploits and Nike spots. Like most superstars,
he’s learned to adopt different personas depending on the situation. I’ve been in the same room with LeBron when he was in corporate mode (promoting a PlayStation game), public figure mode (working the audience at Jimmy Kimmel Live!), serious mode (preparing for the ESPYs) and fun-loving mode (eating dinner after the ESPYs). The last one was by far my favorite. Sitting in a roped-off section at Katana, a sushi place in West Hollywood, LeBron cracked wise with his boys, letting off steam. At one point, he fell sideways into his booth in a giggling heap, looking like a 22-year-old kid. Which he is.

Would he ever act like that with cameras pointed at him? Of course not. Modern
superstars can’t let loose like that. That’s why I’m cutting him slack for breaking Cleveland’s collective heart last week. I
once watched the Red Sox play in Yankee Stadium while wearing a Bruins jersey, a Sox hat and Celtics shorts. Why? Because Boston is my town, and those are my teams. I was showing support, even if it could get me doused with beer or killed. This season, I
saw them in Anaheim and Tampa and wore a Sox jersey both times. That’s just what a fan does when he catches his team on the road.

So while the average Cleveland fan is thinking LeBron is a turncoat, I’m glad to see a superstar show a little guts for a change. The next time we see LeBron at a Yankees-Indians game, I have the sinking feeling his advisers will have gotten to him. He’ll be wearing a Nike hat and saying how great it would be if both teams could win. Sager will nod approvingly, and the local fans will sigh with relief. Watching it, we’ll think LeBron looks like a savvy businessman or pol.

In other words, he’ll look like almost every other athlete of the 21st century.