When you consider those multiple Oscars for the wildly depressing “Million Dollar Baby”; the pop culture success of “The Contender”; the Corrales-Castillo tape making the rounds like Paris Hilton’s first porn tape; excerpts of the script for “Rocky 6” in Sly magazine (that’s right, Sly magazine); Gus Johnson’s Emmy-caliber work on HDNet’s “Lost Fights” (nobody has ever pimped a fighter with 30 losses better than Gus); Julio Cesar Chavez’s record 236th comeback fight; and the city of Providence finally finding its pride in the pugilistic charm of Mr. Peter Manfredo Jr. … I mean, at the rate we’re going, Louis Gossett Jr. probably started training last week just in case somebody called him about “Diggstown 2.”

Leading this boxing resurgence is “Cinderella Man,” which I originally thought was based on the life story of JM J. Bullock from “Too Close for Comfort.” Actually, it tells the story of former heavyweight champ James Braddock, who rose to prominence right after the Great Depression and inspired the nation much like Seabiscuit. (In fact, if Braddock ever fought Seabiscuit, it would have torn the country apart.) “Cinderella Man” seems to be getting pretty good buzz, so I might be in the minority here … but I thought it was a likable, polished, ultimately frustrating movie. Sure, it’s good. Sure, it’s worth seeing. But this could have been a Pantheon Sports Movie if not for one insurmountable problem.

(Should I tell you the problem, or should you just see the movie and find out for yourself?)

Here was the problem: The boxing scenes. They’re a mess. They’re confusing. They’re not that entertaining to watch. Eventually, you end up more frustrated than anything. Wait, who’s getting hit? Is that Russell Crowe? Why are they showing his legs? Cool, a wide shot, now I can see … whoops, back to somebody’s torso again. Who just got punched? I can’t see … is someone bleeding? Why’s the crowd cheering? Why do they keep freezing the film as someone lands a punch? Wait, whose shoulder is that? Why are we looking at the crowd again? On and on it goes. These fights made me so dizzy, I started hoping for quick knockouts so we could be treated to more of the Great Depression.

Was Crowe realistic as a boxer? After two-plus hours, I still couldn’t tell you. He looks like a ’30s boxer, right down to the natural muscle tone and the thick trunk below his chest, and he held his hands the right way and seemed to be snapping punches. Other than that, your guess is as good as mine. Because director Ron Howard edited everything briskly, avoided wide shots and filmed everything tighter than Fox’s dugout close-ups during the baseball playoffs – seriously, when has that ever worked in a sports movie??? – you can’t get a feel for the little stuff like “Wow, Crowe has great footwork!” and “Holy crap, he actually took that punch right in the jaw!” Isn’t that one of the enjoyable subplots in any boxing movie?

And that brings us to the whole Ron Howard problem. He has been involved in a whopping seven movies that were cool ideas but left me feeling they should have been better – “Backdraft,” “Parenthood,” “The Paper,” “Apollo 13” (I thought this was long and pretentious), “Ransom,” “The Missing,” and “EdTV” (a really funny idea that should have worked). But since he has a résumé of 80’s comedies (“Night Shift,” “Cocoon,” “Splash” and “Gung Ho”), as well as an Oscar-winning masterpiece (“A Beautiful Mind”), he’s one of those rare directors whose name can help sell a movie. Personally, I think he’s a hit-or-miss director who picks his projects better than just about anyone. But what do I know? I’m a sports columnist.

Hence, an opportunity lost. Think about it. Howard had the following elements in place for a quality sports movie:

1. The perfect story
Rising boxing star Braddock gets sidetracked by the Great Depression, goes completely broke, has to grovel just to feed his family, gets one last chance at a comeback bout with 24 hours’ notice … then turns his career around (inspired by his second chance), becomes a hero to the masses and eventually captures the heavyweight title. And by the way, this actually happened. 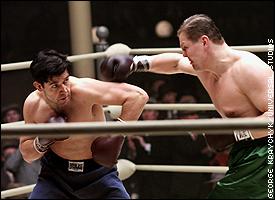 2. The perfect background
What’s more riveting from a dramatic standpoint than the Great Depression? In fact, they would make more movies about the Depression if it weren’t so freaking depressing.

3. The perfect sport
There’s a reason Hollywood has made a kajillion boxing movies. You never see a movie about an aging champ trying to hold onto his title – it’s always some underdog rising from obscurity and becoming a better person in the process, and there’s always a trainer with a lively personality, and there’s always a love interest who thinks he shouldn’t keep boxing, and everything leads to the final heroic fight against the Big Bad Villain. It’s a formula, but it works. And now that we’ve had a Depression boxing movie, the only possible settings that Hollywood hasn’t tapped yet are a Nazi war camp and the Special Olympics (and those are probably on the horizon).

4. The perfect lead
That’s Crowe, probably the best living actor right now. When he adopts an accent (like Braddock’s Jersey accent), you never have to worry about a Costner-like debacle. When he throws himself into an action movie (like in “Gladiator”), you feel like he’s really fighting. When he alters his appearance and plays a character (like in “The Insider”), you immediately forget it’s him. When he’s mailing it in for a paycheck (like with “Mystery, Alaska”), he leaves you with no doubt whatsoever. And so on. In this movie, I would give him the “He’s never been better” tag, but I can’t imagine topping “Gladiator.” He’s nearly as good. It’s close. Crowe alone makes the movie worth seeing – like with the scene where he shows up at his old boxing haunt to panhandle money. Devastating scene. There might be actors as good as Russell Crowe, but nobody is better than him. He’s the Tim Duncan of Hollywood. You’re always in good hands.

5. The perfect sidekick
That’s Paul Giamatti as Braddock’s fast-talking trainer, coming off like a good-natured version of his sleazeball radio exec who tortured Howard Stern in “Private Parts.” And there was some luck here – it took them nearly two years to complete this movie, and during that time, “Sideways” was released and became a surprise hit. So Giamatti’s involvement raised everyone’s hopes (including mine). Although they could have thrown in a “I’m not drinking [bleeping] merlot! I’m not kidding! I will walk out of there!” scene.

6. The perfect wet blanket girlfriend
That’s Renee Zellweger as Braddock’s resilient wife, perfect casting because nobody from the ’20s and ’30s was that attractive – they all had squishy faces and bad haircuts (just like Renee in this movie). Ever since she gained all that weight in “Bridget Jones,” I’m not sure what happened to her, but she doesn’t even look normal anymore. Still, she’s a good actress, and when she starts pulling the inevitable “I don’t want you to get killed” routine, you’re liking her and hating her at the same time. She’s like Talia Shire crossed with Ellen Barkin.

So when Howard throws these elements together, then executes the first grueling hour of the movie flawlessly – when Braddock’s life slowly falls apart, and you’re just dying for the guy – your expectations start climbing. Holy crap. What a movie! I can’t wait for the boxing scenes! And then the first fight just clunks. So does the second one. And the third one. By the time the championship fight rolled around, I was zoning out and thinking about things like “Did I remember to cash checks this week?” and “Am I going to make it home in time to beat the transaction deadline in my roto league?” From a rewatchability standpoint (a crucial element for any great sports movie), I can’t imagine sitting through this thing a second time. Oh, well. It’s still worth seeing, if only because of Crowe. Just be prepared to be mildly disappointed (as well as mildly cross-eyed) by the time it’s over.

Anyway, “Cinderella Man” got me thinking … 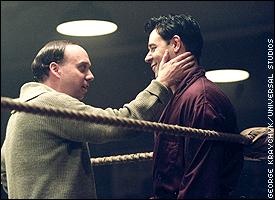 My Comcast cable system carries about 75 movie channels. HBO alone is represented with eight different channels: HBO, HBO2, HBO3, HBO On Demand, HBO Family, HBO Comedy, HBO HDTV and HBO Latino – my favorite, because I’ve seen “Boogie Nights” so many times, the only way I can enjoy it anymore is by watching it in another language. Soy la estrella más grande aquí! Usted no es el jefe de mí! But I always find myself wishing that they distinguished the channels better than the generic brand names. For instance, I watched “Copland” last weekend on a channel called “Encore Mystery,” which was funny in itself (that they actually spun off Encore). But you know what you’re getting with Encore Mystery. You’re getting mysteries. Same with HBO Comedy or Black Starz (another one of my favorites, since you could never get away with a channel called White Starz).

So why not go further? Why can’t every channel more clearly define its territory? HBO 2 could change its name to HBO Inferior. Cinemax 2 could become The Naked Channel. I want a Big Stars Channel (just Eastwood, Cruise, Stallone and the other megastars). I want a Sports Movies Channel, an Unintentional Comedy Channel, even a Mafia Movie Channel. Most of all, I want an Unrealized Potential Channel (UPC for short) for movies that should have been fantastic but somehow left you strangely disappointed. “Copland” was definitely like that for me (the ending was too preposterous). Same with “Casino,” “He Got Game,” “Beverly Hills Cop 2,” “Boomerang,” “Can’t Hardly Wait,” “Magnolia,” “Any Given Sunday,” “Ransom,” “Ali” and about 250 other movies that bothered me even as I was somewhat enjoying them.

Here’s why I’m telling you this: “Cinderella Man” might have been the all-time UPC movie. Fortunately, we’re in the middle of a boxing renaissance, so we only have to wait three weeks until the next boxing flick comes out. Have they made a Civil War boxing movie yet? Somebody could make some real money with that one.