Even Romeo Crennel is more alive than my dream for an 11-0 playoff run. I have mourned it. I have buried it. And I have moved on. Kind of like Vikings fans with the Tarvaris Jackson Era. But before we get to Round 2 of the playoffs, let’s hand out some awards for Round 1:

The Finale of “Rocky III” Award for “greatest simultaneous moment”
When it was unclear whether a Minnesota player had re-established himself outside the end zone before downing a punt on the Philly 2-yard line, the officials conferred as both Andy Reid and Brad Childress held red flags waiting to dispute the call either way. That’s right, two of the worst challengers in football history were going head to head! This wasn’t just the most exciting moment of the weekend; we’re going to be hard-pressed to top it for 2009. The officials ruled for Philly, Childress challenged and the call was dramatically overturned. So what if the Vikings lost the game? Childress lost the battle, but he won the war. And sure, it was a war of abject stupidity. But still.

The William Ligue Jr. Award for “Most Enterprising Way to Crash The Proceedings and Get Noticed”
Speaking of Reid and Childress, kudos to the guys at Bindledog.com for bringing a “Flabbergasted Four” idea from my Nov. 14 mailbag to cartoon life! Check it out:

The John Madden Award for “Performance that most resembled a ‘Madden’ video game opponent if you’re playing the computer and it decides there’s no effing way you’re winning the game”
To Chargers punter Mike Scifres, who stuck five punts inside the 10-yard line, including the biggest punt of wild-card weekend — the one with less than three minutes remaining that bounced inside Indy’s 2, kicked straight up like one of Tiger’s approach shots on 16 at Augusta, then spun sideways out of bounds. When he jogged off the field with an “I’m in the zone, what do you want me to say?” look on his face, I kept waiting for him to shrug sheepishly at Marv Albert, Mike Fratello and Magic Johnson at courtside. Has there been a greater punting performance in playoff history? And considering Pittsburgh’s troubles in the same department, for the first time in my gambling life, I actually factored in the Manute-Muggsy level disparity in punters with my Chargers-Steelers pick below. How much is 10-15 yards of field position (either way) worth 10-12 times in a 60-minute game? Ten points? Fourteen? How do we calculate this?

WORD TO THE WISE GUYS

If you like the Chargers, Cards or Eagles this weekend, remember that no team has advanced to a conference title game since 1996 without winning 10 games or more.

Here’s the complete list of teams to make a conference final with a single-digit win total (16-game regular seasons):

The Bernie Madoff Award for “Studio host who made you feel as if you were watching Bernie Madoff hosting ‘Mad Money'”
Like everyone else, I did a quintuple take upon seeing that NBC had trotted out failed Lions GM Matt Millen as one of its pregame studio guys. Like everyone else, I was confused about what NBC thought my reaction should be — should I be nodding intently as Millen broke down the Cards-Falcons game and saying, “That’s a great point, Guy Who Single-Handedly Murdered The Lions?” Like everyone else, I felt bad for Detroit fans, who had just put the 0-16 season behind them and probably looked forward to a pain-free playoffs … and suddenly, there was the John Wilkes Booth of their franchise staring at them in HD. Like everyone else, I remembered Millen was good enough on TV that it made you think, “So yeah, maybe that’s how he got hired.” Like everyone else, I wondered what kind of tranquilizer NBC had to give Keith Olbermann to keep him from making a snarky Millen joke. And …

(Wait, this deserves its own award.)

The Bird Who Crapped On My T-Shirt Right Before the 2004 Baseball Playoffs Award for “Best omen heading into a game”
… like everyone else who backed the Cards, I couldn’t have been happier when Millen picked the Falcons to win. He didn’t just pick them, either. He was adamant about it. I think I broke my personal record for “Fastest time calling in more money than I already had on one team.” I was like the Usain Bolt of gambling; I think I banged out another Cards bet in 9.85 seconds. Let’s add this to Playoff Manifesto 5.0 and make it the new No. 1 rule: Any time Matt Millen inexplicably appears on a studio show, picks a playoff team to win and seems confident about that pick, bet the house on the other team as fast as you humanly can.” And you thought Millen couldn’t bring joy to football fans.

You know that McDonald’s ad where the lady serves Chicken McNuggets at her cocktail party and her guests are like, “Wow, this chicken is great!” and they have no idea they’re eating McNuggets? How dumb do they think we are? Who would ever eat a McNugget without immediately thinking, “I am eating a McNugget?” And what hostess would lie and pretend she made them herself? If McDonald’s is going to have an ad where a woman deceives her guests, it should use their secretly delicious chocolate chip cookies, which the Sports Gal brought to a shower one time last year and nearly pretended she made herself before confessing. Those cookies are like “Fight Club” — in this case, nobody talks about them because they don’t want the price to go up. Whoops, I just broke the first rule of McDonald’s chocolate chip cookies. 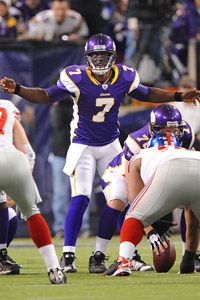 The Vincent Gallo Award for “Most frustrated, depressed and possibly homicidal fan of a star-crossed NFL team”
To my buddy Geoff, a lifelong Vikings fan whose texts became increasingly angry as the game slipped away in the second half, concluding with these three beauties: