In a press release coinciding with last week’s launch of the new streaming service Beats Music, the word “experience” appears five times. With the possible exception of “Beats Music” or “the,” “experience” is the most prominent word in the entire announcement. But what exactly does Beats Music mean by experience?

In the second sentence of the opening paragraph, the company promises to give “fans and music lovers an unparalleled personalized and curated listening experience.” (Experience is personalized and curated.) Next is a quote from cofounder Jimmy Iovine, who says “it takes a highly curated, uninterrupted sequence of songs to achieve a fulfilling music experience.” (Experience is uninterrupted and therefore fulfilling.) This point is reiterated by CEO Ian Rogers, who adds that Beats Music’s mix of expertly crafted playlists and taste-sensing listener algorithms is comparable to “the music experience only a talented DJ or music expert can deliver, but also the right one for you right now.” (Experience is right in terms of specificity to the listener, but especially immediacy of delivery.) Finally, somebody named Anne Stanchfield, who is the divisional merchandise manager at Beats Music’s retail partner, Target, claims that “music is an important part of our” — as in Target’s — “DNA, and we fuel our guests’ passion for it by collaborating with top names in the industry to deliver exclusive music experiences.” (Experience can be purchased exclusively at this particular big-box store.)

If you are not yet acquainted with the Beats Music experience, it’s time to prepare yourself for an exceedingly aggressive introduction. An unprecedented promotional rollout already under way includes ads during Sunday’s Super Bowl telecast, regular spots on Ellen DeGeneres’s daytime talk show, and (most important) the bundling of Beats Music with AT&T’s mobile service. Coming off a year when sales from downloads shrank for the first time ever — as trends pointed toward an even deeper cratering — the rise of Beats Music represents an all-in bet on subscription services offering financial salvation for many of the most influential figures in the record industry.

Founded in 2012 as an offshoot of Beats Electronics, the wildly successful company operated by Iovine and Dr. Dre that has made millions off high-end Beats by Dre headphones, Beats Music has entered a market populated by relatively utilitarian streamers like Spotify and Rdio that don’t have nearly the marketing muscle. Their products aren’t as nice, either — the Beats Music app is just as slick, attractive, and well made as advertised, with a wealth of playlists created by famous musicians (including Jay Z and the company’s chief creative officer, Trent Reznor), celebrities (like LeBron James), and established tastemakers (everyone from Pitchfork and influential New York City hip-hop station Hot 97) that provide endless entry points for nearly 20 million songs. There’s also the Sentence, a lifestyle-oriented song-selection generator that invites users to create an insta-soundtrack based on whatever it is they’re currently doing.1

It’s based on a similar idea from overmatched competitor Songza. 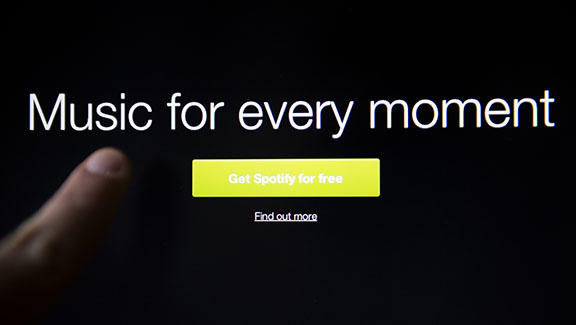 Unlike its competitors (including the most popular streaming service of all, YouTube), Beats Music won’t offer a “free” ad-supported option. Perhaps this explains all the “experience” talk — songs aren’t as valuable as they once were, so what Beats Music is really selling is a better, more entertaining delivery method for those songs. For those of us who witnessed the dawn of the digital music age in the late ’90s, Beats Music might very well represent the end of a Wild West period, when the appeal of downloading music (legally or not) was that you could conceivably do it all day long for the rest of your life and never stop accumulating. What Beats does is reenforce industry-mandated order for the sake of listeners who want options but also require some guidance. It is uninterrupted but curated. It is fulfilling so long as your definition of experience aligns with theirs.

While I’m a regular and mostly happy user of streaming music services, I realize I’m probably doing it wrong. Because I most often cue songs up when I’m working, I primarily seek out good writing music. Therefore, my choices tend toward the tried-and-true, which for me means instrumental, atmospheric, richly cinematic electronic music like Air’s Moon Safari or Fuck Buttons’ Slow Focus. I also like to play music on my phone when I’m eating with my son, and in those instances I fall back on albums (yes, albums) that I’m already deeply familiar with, like The Low End Theory or De Stijl or Lonerism.

Now, I could say that my intention is to expose the little one to Great Musical Works during his formative years, which is sort of true. But he’s also screaming and throwing sweet potatoes in my direction, so I need to pick something quick, and that’s the music at the top of my head. The most easily accessed songs are what suit me when I do my listening here. It’s a great way to quickly locate songs I know I already like, or to find songs that sound like songs I know I already like. But I find that listening this way walls me inside my own preferences and prior musical experiences. These walls are virtual and physical — because I’m running out of places to purchase new music in person, my music consumption has become an increasingly solitary and sedentary exercise.

Beats Music has been expressly designed to remedy this alienating sensation, in the sense that it’s been engineered with mobile devices in mind, and also because the voluminous playlists are geared toward activities that conceivably can be enjoyed while also holding a smartphone. There are lists upon lists of songs to accompany drinking, “BBQing,” “hitting the slopes,” “getting it on,” and so on. And under those lists are many more sublists — if you want drinking songs with a strictly country flavor, you can choose from the best of Toby Keith, Gram Parsons, or ’60s Bakersfield greats, among many other options. No matter the genre, there are countless rabbit holes.

As for the Sentence, I’m not sure I’m using that correctly, either. Songs are selected using four changeable elements: where you are, what you’re doing, whom you’re with, and which genre you prefer. The problem is that many of the choices don’t apply to real-life people who live nonfictional lives. For instance, on my first run-through I was stuck with this combination of scenarios: “I’m ON THE STREETS & feel like JETSETTING with MY BFF to REGGAE/DANCEHALL.” This didn’t remotely reflect my actual situation. In reality, it was more like “I’m IN MY KITCHEN & feel like INDIFFERENTLY TOUCHING MY PHONE with NOBODY.”

For such a detailed equation, the results it produced seemed suspiciously boilerplate. I have a very limited knowledge of reggae and dancehall, and yet I knew all the artists Beats played for me: Shaggy, Jimmy Cliff, Shabba Ranks, Toots and the Maytals, and (duh) Bob Marley. Apparently MY BFF has the taste of a college sophomore.

I decided to try again with different criteria. I stuck with reggae/dancehall, but changed my location to “AT THE MALL,” my activity to “SAVING THE WORLD,” and my companion to “YOUR MOM.” (As in my mother, not your mother, because that would be silly.) For whatever reason — the urgency of staving off apocalypse, maybe? — this playlist was far more edifying. I didn’t know any of the artists, and I enjoyed much of what I heard, particularly Lady Saw’s saucy “I’ve Got Your Man” and Culture’s tremendously insinuating “Behold.”

The ability of streaming services to accurately gauge the tastes, environments, and even moods of listeners, and provide an appropriate accompanying song that complements these circumstances, is sure to improve over time. In a laudatory story for Spin, Garrett Kamps likens the Beats app to the sentient OS in Her, speculating that in the future “it’ll understand your myriad musical preferences, all those component parts of all the music you love. It will know where you are and what time it is, what current events took place that day, and which of those you’re aware of.” A robot programmed to craft the ultimate never-ending mixtape won’t require hackneyed phrases to punch up the music you want. It will already know.

“You won’t have to say, ‘Play a melancholy song’ — you’ll just have to say, ‘Play music,’ and the right song for that moment will play,” Kamps writes. It sounds almost too good to be true, until you remember that Her is supposed to take place in a future dystopia.

Beats Music’s own proprietors aren’t really pushing the robo-music nerd angle, but rather the preponderance of human expertise the service puts at the fingertips of users. Rogers wrote about this in a blog post on Beats Music’s website 10 days before the launch:

In our experience it’s always been a living, breathing human who has brought us that song we fell in love with. The song you couldn’t stop playing over and over. The album you deemed a headphone masterpiece. The mix tape that made you think “I’m gonna marry this one.” We tried to remember a time a robot found us magic but all we could find were the times the robot made us laugh: “You like Pantera? Have you heard of Black Sabbath?” “You like Mumford and Sons? Here’s another song with banjos!”

This has been interpreted as a veiled shot at the inexact and oft-mocked recommendations Spotify makes based on play counts. But it’s also a salve for technophobic oldsters like myself who grew up with record shops and still prefer the (here’s that word again) experience of thumbing through physical media and stumbling across new records you didn’t know you wanted when you walked into the store. This is a common pattern with emerging technology: It kills off an outmoded way of life, and then tries to replicate the virtues of that way of life via the very means that did the killing.

If we’re really talking about a service catering to life-enriching music-related experiences, something important is being left out. I’m talking about the value of the “wrong” song. The “wrong” song isn’t fulfilling upon first listen. It might in fact be a song you think you never want to hear again. It’s certainly not the sort of thing you’d want on an uninterrupted loop. It is death metal or trap rap or mainstream country. It is the very thing that will send you scurrying to a curator who can dutifully edit out music you find disturbing. But the “wrong” song isn’t really wrong, it just isn’t immediately gratifying or instantly amenable to your sensibilities. It’s challenging.

Here’s another way to define experience: It’s a process of seeing and doing things that makes you wiser than you were before you saw or did those things. Music can only be transformative if it is allowed to reach people who will be noticeably changed by their exposure to it. Put a different way: Think of how many songs you love that you hated upon first listen. Aren’t those the songs that often end up meaning the most? That’s the essence of true discovery, when a song punctures the veil of your own myopia and proves you wrong. It’s what makes being a music fan genuinely thrilling sometimes.

For all the delivery gimmicks that have emerged to put a jolt of excitement back into pop music, a weird paradox holds us back. Somehow, the ability to constantly home in on the “right” songs has made listening seem less satisfying. Let me be clear: I enjoy streaming services, and Beats Music in particular is the best one I’ve used. I look forward to finding out whether my imaginary BFF’s taste in música Mexicana varies depending on whether we’re BUMMING OUT or TAKING A SELFIE. But ultimately, it’s an experience that doesn’t make you feel experienced.