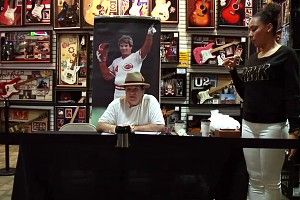 In case you missed the New York Times story today, ESPN is launching a second volume of our Peabody Award–winning 30 for 30 series that premieres this fall and runs through 2014. (To view the trailer, click here.) Or, as the project has been called internally, “They Screwed Us Out of an Emmy, Let’s Run This Baby Back!” If the first series celebrated ESPN’s first 30 years, then the second series will celebrate the storytelling form — not just with 30 new sports documentaries from 30 filmmakers (which won’t just be confined to that 1979-2009 time frame this time, by the way), but our new 30 for 30 Shorts web series that premieres monthly on Grantland starting today.

Why expand the series with short films? Because 30 for 30 needed its own Mini-Me. Because live streaming has gotten so reliably fast that we felt like we could pull this off. Because there are stories out there that we loved for four to 12 minutes, but maybe not for a full hour. Because talented filmmakers are usually juggling multiple projects, so sometimes it’s easier for them to take on a shorter project than a bigger one. Because we wanted you to waste more time on your iPad, or possibly rear-end the car in front of you as you’re watching these on your mobile device when you shouldn’t be watching these on your mobile device. Because Pete Rose bet we couldn’t do it. (Just kidding.) And most important, because we felt like there was a creative void sitting there for this specific form of storytelling. As you’ll see with our first short film, you might not want to spend an hour in Pete Rose’s world at this point of his life. But eight minutes? Absolutely.

On behalf of everyone at ESPN Films and Grantland, I’m proud to present our first 30 for 30 Short: Here Now, directed by Eric Drath.