One gray and wintry day in South Bend, Indiana, back in 2005, Charlie Weis, then coaching Notre Dame football (and not very successfully, either), sat with me to talk about quarterbacks. Specifically, he was talking about one quarterback, a game-manager type whom he and Bill Belichick had to throw into the breach when they were together on the staff of the New England Patriots. The team’s starter, a highly priced rocket arm named Drew Bledsoe, had gotten freight-trained into the hospital by a New York Jets linebacker named Mo Lewis. (One person on the sideline remembers it as sounding like “an 18-wheeler hitting a deer.”) That forced Belichick and Weis to turn to a skinny young man out of the University of Michigan who didn’t sling it like Bledsoe, but who didn’t make as many mistakes, silly or otherwise, either. This serendipitous decision worked out fairly well over the next decade for the Patriots. But Weis had a larger point to make about quarterbacks, and about the serendipity that had forced the beginning of Tom Brady’s career.

“OK,” Weis told me, “each NFL team carries three quarterbacks, right? That means, at any one time, there are 90 people who have jobs as quarterbacks at the highest level. And I will tell you right now that there aren’t 15 people anywhere in the world who can play that position well. That means there’s a lot of bad quarterbacks in the NFL.”

The sample size is probably a little bit bigger in college football, but not that much bigger, and certainly not that much bigger at the level on which Alabama plays. On any weekend, you will see an astonishing amount of terrible quarterback play, even among the Top 25 teams. This is why the dismissal of AJ McCarron as merely a “game manager” — as though there’s anything wrong with that per se — is glib and inadequate. It is so hard to play the position well, no matter what your individual playing style is, and no matter what your individual athletic skills are, that no quarterback at this level and above truly can be said to be along for the ride. In McCarron’s case, the very idea is ludicrous.

Not long ago, the case was being made — loudly, and by people who should have known better — that the primary gift Tim Tebow had as a quarterback was that he was a “winner.” AJ McCarron’s record at Alabama could end up making Tebow’s look pale. In the two BCS championship games he has won, McCarron has completed 43 out of 62 passes for 498 yards and four touchdowns. If Alabama wins its third this year, something that looks increasingly likely as the weeks go by, McCarron will have done something that no other college quarterback has ever done, and it will give him a college career not dissimilar to the NFL record of Bart Starr, another Alabama quarterback who heard endlessly that he was the creature of a system, that he was no Johnny Unitas, that he was merely a “game manager.”

Of course, an odd fortune has gifted McCarron with a fascinating dark twin down there in College Station. That began last year, when Johnny Manziel had his premier performance in a Heisman Trophy season by beating Alabama in Tuscaloosa. (McCarron, it need not be said, went on to win his second national title. He comes out ahead, I’m thinking.) Even given that his girlfriend, Katherine Webb, became a Twitter sensation last year, McCarron is never going to beat Manziel to the pages of TMZ. Manziel hasn’t deserved the opprobrium heaped upon him by media types seeking a way to remain 12 years old, and McCarron doesn’t deserve to be some sort of moral witness by contrast. He deserves better than the blessings of simpletons. In fact, at a media session before Texas A&M and Alabama played in September, McCarron visibly bridled, fed up with the comparisons. The two have become friends, and McCarron sounded like one kid sticking up for his pal. This is as it should be. Football is vast. It contains multitudes. It can handle both these guys. McCarron’s team, it should be noted, won the game this year. Not by much, but by enough. 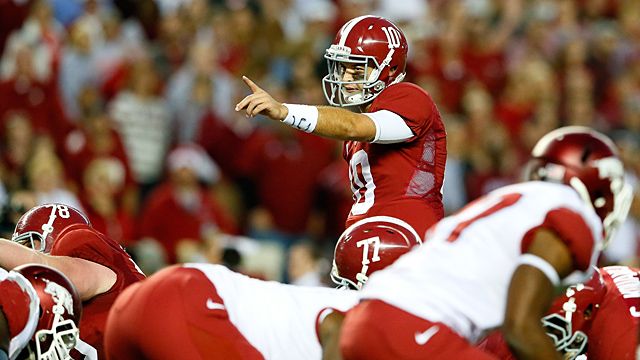 Actually, it was right neighborly of the folks at Alabama to leave up on the Bryant-Denny Stadium press box television screens the last few moments of the Auburn–Texas A&M game, in which the Tigers were kicking the everlasting hell out of Manziel and his Aggies. There was even some discreet cheering — nothing untoward, nothing that can’t be taken back before this year’s Iron Bowl — as the seconds ticked down in College Station. Meanwhile, down on the field, as the sun fell and the sky became a parfait dome over the stadium, Arkansas kicked off to Alabama and pretty much lost the game due to gravity. The ball came down.

It was 14-0 at the end of the first quarter, 28-0 at the half, 45-0 after three, and it ended up 52-0. If nothing else, and it was a lot of something else Saturday night, Alabama’s performance was mathematically symmetrical. This is the kind of game AJ McCarron was born to play. This is the kind of game that makes sure he remains unfairly an afterthought when they hand out the shiny hardware at the end of the season. Right now, McCarron stands on the brink of completing a career that, for winning alone, will push him beyond any other college quarterback who ever played. He has started 34 games for no. 1 Alabama. Alabama has won 32 of them. He has already quarterbacked Alabama to two BCS national championships. He is an odds-on favorite to do it again, especially since the SEC seems to be falling to pieces around him. (Because of the unwieldy shape of the conference, Alabama will not play Missouri unless they meet in the SEC championship game, which is a pity.) If he does that and is not reckoned with the greats of the game, then history needs to go to replay.

Every football player talks about not looking past anyone, and how it’s all about doing your job; those who play for Nick Saban, who is good friends with Bill Belichick — with whom he shares the same kind of love for loose talk once evinced by East Germans — are more than usually resolute in their ability to say nothing at all. But this was intriguing. Not merely Whoever’s Next, but faceless. Another set of generic automatons to be dismantled. This is, of course, another reason why McCarron’s profile is considerably lower than his record would seem to warrant, but it is a perfect indication of how he does his job. On Saturday night, from the opening drive, Arkansas simply was not a factor in the evening’s equations. McCarron did what many people mistakenly believe is what is really wrong with him.

He merely “managed the game.”

As I said, the Razorbacks caught a bad break when the ball came down. McCarron took Alabama 68 yards in 12 plays. He mixed in bursts by running back T.J. Yeldon with short, quick passes that chewed up 10 or 15 yards at a clip. (He did miss a wide-open Kenny Bell on a deep route early in the drive.) With second-and-goal at the Arkansas 4-yard line, McCarron faked to Yeldon. You could see the entire left side of the Arkansas defense virtually vanish, and Jalston Fowler stepped out and took a soft pass into the end zone for all the points that Alabama would need Saturday night.

If McCarron and Alabama were to win their third title this year, it might finally and completely dispel the notion that he is nothing more than a “game manager.” That has always been a way to say that he is nothing more than the product of a system. It is a way to diminish him by highlighting the extraordinary talents of his teammates. It is a way to minimize how difficult it is to play quarterback at the level at which AJ McCarron has played it, and to play it well. People can make it look like more fun, but nobody makes it look easier. And it’s anything but that.

That’s not my job, to judge myself,” he said. “That’s the coaches’ job. That’s what they get paid for. I just try to go out and do my job to the best of my ability.”

He had an early night of it Saturday. Saban took McCarron out in the third quarter, with Alabama leading, 42-0. He had a brisk and efficient game — 15-of-21 for 180 yards and three touchdowns, which is what you do when you’re AJ McCarron and your team is rushing for 352 yards, the last 80 of them on a hysterical sprint down the left sideline by freshman Derrick Henry with 59 seconds left. That is how you manage the game, and that is how you manage the game quite well, against good teams and bad, all the faceless ones that are left in the career of AJ Football. Because why the hell not, anyway?