What Is Total Shots Ratio? And How Can It Improve Your Understanding of Soccer? 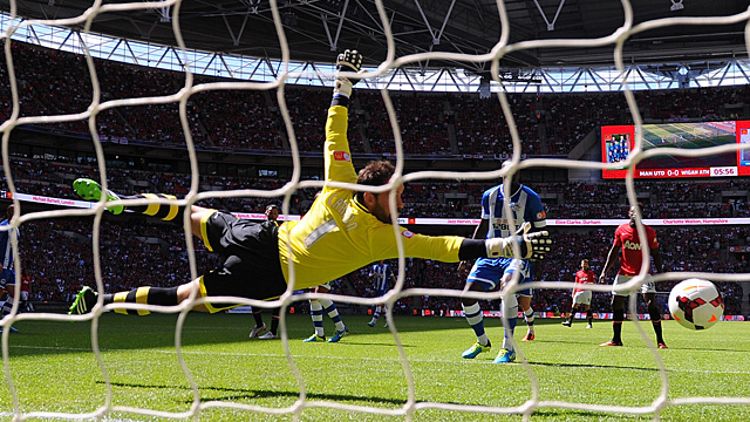 The most important thing in soccer happens extremely rarely. Over the last two seasons in the Premier League there were only 2.8 goals scored per game. That’s not a lot, and because it’s not a lot, it’s created a real stumbling block for statistical analysis in the sport. After all, the first rule of statistical analysis (now that it’s no longer “don’t talk about statistical analysis”) is that you need large numbers. They don’t call it the era of big data for nothing. Lack of goals is the first hurdle that any serious attempt at soccer analytics has to overcome. That’s where something called Total Shots Ratio becomes important.

As with lots of analytics concepts, TSR is just a fancy set of letters for an incredibly simple idea: Let’s count shots. Specifically, TSR is the ratio of how many shots a team takes versus the number of total shots (actual equation: shots for/(shots for + shots against). For example, Manchester United took 562 shots and conceded 494 shots last season. That works out to a TSR of 0.53. And it turns out counting shots is pretty important. Because goals are so rare, and can be scored in such odd and wonderful ways, a team’s past scoring record isn’t a particularly reliable predictor of future goals. Looking at how frequently a team shoots predicts future goals much more accurately. In that way, it’s similar to baseball’s run differential. If you want to predict how often a baseball team will win, figure out how much better they are at doing the thing that leads to winning (scoring runs). If you want to figure out how often a soccer team will score goals, figure out how often they do the thing that leads to scoring goals (shooting). TSR is a measure of a team’s ability to take shots while preventing opponents from shooting.

Why Bother With TSR?

The biggest thing that TSR has going for it is that it works. A team’s point tally is definitely correlated with how good its TSR is (for some actual math on how highly correlated TSR and points are, you can check out Martin Eastwood’s work on the subject). This is not to say that the stat is some sort of magical prediction tool, because it isn’t. Last season the top TSR teams were Tottenham (0.65), Manchester City (0.63), Liverpool (0.63), Arsenal (0.60), Everton (0.58), Chelsea (0.57), and Manchester United and Southampton (both 0.53). What you see here is more or less what you’d expect — the top teams, but not really in the top order, with Southampton as a notable exception. The season before had similar results with Manchester City (0.65), Arsenal (0.62), Liverpool (0.61), Chelsea (0.60), Tottenham (0.60), Manchester United (0.56), and Everton (0.52). Notably absent from that list is fifth-place finisher Newcastle, which had a 0.47 TSR; it finished last year in 16th, although ironically with an improved TSR of 0.51. So, the stat isn’t perfect, but in general, shots lead to goals, and goals lead to wins, so over the course of the season, the teams with the biggest shot differential tend to be the ones that win the most games.

While TSR is a pretty good measure of team strength, over the past two seasons it has greatly undersold Manchester United. In terms of TSR, the United team that officially kicked off the season this year with a mundane victory of Wigan in the Community Shield is a mildly above average team. Of course the reality is that Manchester United has dominated the Premier League over the last two campaigns, racking up 89 points in each year and coming within seconds of back-to-back Premier League crowns. That’s a huge difference, probably too big a difference to simply shrug and attribute to the luck inherent to any predictive statistic (the math behind that statement is really mathy, but you can find it here). The likelihood is not that Manchester United are an average team that just had a couple of lucky years, as TSR suggests. It’s much more probable that TSR — while a good starting point for analyzing how good a team is — misses some crucial factors, and factors that Manchester United just happen to be really good at.

To use another baseball analogy, TSR is roughly equivalent to batting average, in that much like batting average treats all hits equally, TSR treats all shots the same. So, if one team took 19 shots from the halfway line, while its opponent only took one shot that happened to be directly in front of an open net, the first team’s TSR would be 0.95 and the second’s would be 0.05, despite the fact that clearly the second team has a better chance of scoring, and winning. But, while in baseball it’s easy to weigh singles, doubles, triples, and home runs accurately to create slugging percentage, that’s not the case in soccer. Quantifying the difference in value between different shots is quite difficult. Some things are fairly obvious and proven by data: For example, everything else being equal, traditional kicked shots are better than headers, closer shots are better than shots from distance, and shots from the middle of the field are better than shots from tight angles. But everything else is never equal, and there’s a whole realm of stuff that TSR doesn’t account for. Most of the time that seems not to matter, as over the sample size of a season teams can’t seem to differentiate themselves. But, sometimes, as with Manchester United, a great team can, and TSR just misses it.

The biggest accomplishment of TSR is that it manages to find a way around the problem of the rarity, and consequently the randomness, of goals. It’s a great starting point and a useful guideline to find teams that may be overperforming, like Newcastle in 2011-12, or underperforming, like Newcastle in 2012-13. But, while it’s a new and important tool in the soccer analysis quiver, it remains a work in progress. But hey, batting average was around for like 100 years before anybody started to care about its shortcomings. And by that math TSR is about 98 years ahead of the game.